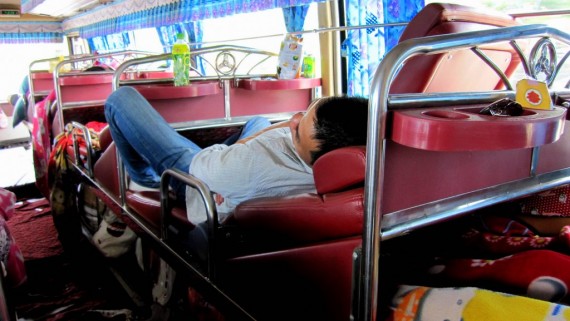 We had spent a few days in Vang Vieng and after realizing that Laos just wasn’t for us we decided it was time to make our way to Vietnam. We stopped into a street side tour agency that was run by a run by a young, lanky Lao man. He insisted that there were no overnight sleeper buses going from Vang Vieng or Vientiane to Hanoi, Vietnam even though the sign out front of his shop advertises that there is such a bus. 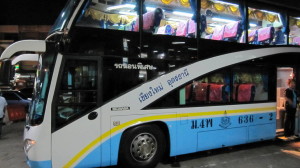 Our only choice at this point was to take a Super-VIP bus and we had taken a Super-VIP bus from Chiang Mai to Vientiane a couple weeks prior and we were pretty impressed with it. We double checked with him by making sure there would be a bathroom on board. This would be one long trip without a bathroom on board, that’s for sure. We knew ahead of time that this bus ride would take between 22-24 hours as advertised but once again I’ll repeat “Nothing EVER goes according to plan in South-East Asia.”

The Ol’ Bait and Switch

We arrive in Vientiane after an uncomfortable four hour ride from Vang Vieng and we’re shuffled off the bus and into an over-sized tuk-tuk in order to transfer us to the Vientiane bus station where our Super-VIP bus would be awaiting us. We arrive at the bus station and it’s just complete chaos. Crowds of people are being pointed in all directions. We’re directed towards a bus that we can see in the distance, although it doesn’t resemble any of the “Super-VIP” buses that we had taken in the past. Hmm!

We’re herded across the parking lot like cattle and I’m already day dreaming of what this ride is going to be like. After tossing our bags underneath and hopping on to the bus, we quickly realize that we’re boarding an overnight sleeper bus. This is quite odd considering our tour agent back in Vang Vieng was sure there were no such buses running to Hanoi. I yell down to the driver, “Where’s the bathroom?”. He replies “No bathroom, we stop, we stop!” Did I mention that NOTHING goes as planned in South-East Asia?

Granted our driver did stop quite a few times along the way. Generally speaking we stopped for bathroom breaks about every 2 to 3 hours and the bathrooms that we stopped at we’re pretty much just shacks with holes in the ground. The closer we got to Vietnam, the nastier the bathrooms were. Our last bathroom stop was at a pineapple stand and the bathrooms were just out back. “Just walk down that path right there and find a tree to squat behind”.

The Truth about Sleeper Buses

Sleep is very rare on a “sleeper bus” believe it or not. Not only because they’re uncomfortable if you’re over the height of 5’9″ but also due to the fact that the bus driver sounds his air horn every 5-10 seconds over the course of the entire ride. You see in Vietnam, they use the horn as a defensive driving technique. In other words by sounding their air horns they’re saying “Get the heck out of the way because I’m not planning on stopping anytime soon”.

Dangerous Isn’t Even the Word

Oh and I have one more interesting fact about this trip. We had ONE and only ONE driver over the course of the entire trip from Vientiane to Hanoi (28 hours). Yes, we stopped at points and he went into the restaurants and had himself some food but not once did he catch up on any sleep! I’m guessing that may be the reason why he was speeding, honking his air horn, and overtaking buses and trucks on bends and curves along the way. He must have been driving on pure adrenaline. You do know that some bus drivers are known to take drugs in order to stay up, drive longer distances and make more money. Right?

Twenty eight hours later we arrive in Hanoi. It’s pitch dark, we don’t have accommodations lined up as of yet, and we’re 4 miles from the “backpacker” area. It took 20 minutes of haggling back and forth before we actually hopped in a taxi and made it to our destination. We were frustrated, exhausted and ravenous.

We arrive down town to find out the hostel we had in mind is completely full. A tout on the street lures us in and asks us to come check out his place right down the street. Hesitantly, we agree and before we know it we’re booked in for the night.

After more than 30 straight hours of travel, we’ve finally found a place to rest our head. Sigh…

Editors Note: This goes out to all of my fellow travelers who may be thinking about traveling overland from Vang Vieng or Vientiane to Hanoi, Vietnam, please THINK AGAIN!