The Day I Decided to Conquer Doi Suthep

My eyes slowly peel open as I stretch and yawn. It’s 10:30AM and I’m just waking up and looking forward to getting my day started. It seems that most of my days living in Chiang Mai start out the same way due to my late night working habits.

This morning is a little different than the norm as I’m feeling a little more energized than normal. All of a sudden an incredibly adventurous idea pops into my head…

I’m going to ride my bike up to Doi Suthep! Well maybe I won’t ride the whole way up but if I can at least get to the base and see how I feel then I’ll go from there…

Next thing you know I’m on the elevator headed down to the ground floor where my mountain bike is locked up and waiting for me. If the bike could talk, I imagine it would be crying hysterically and calling me all sorts of names. Why? Well, I was about to head out on an 18 mile R/T ride to a temple called Doi Suthep and approximately 7.5 of those miles would be straight uphill!

This trusty bike of mine was actually something that I borrowed from a fellow Chiang Mai CouchSurfer believe it or not. It wasn’t the best bike in the world (LA Bicycle), but it got me around town.Being a bicycle lover, what better way is there to see the city that you’re living in than on a bicycle? Then again, cruising the city and conquering Doi Suthep are two totally different animals. 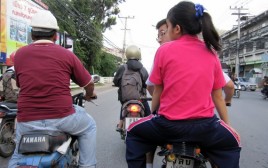 Once I got on the road and headed towards Doi Suthep I was cruising at a really good pace. I knew I had a ton of riding ahead of me so I wasn’t about to burn all of my energy just yet.

After about two miles I was at the base of the mountain and I made a quick pitstop at the Visitor Booth where I grabbed a map and attempted to explain to the woman behind the desk that I was planning on riding up to the temple of Doi Suthep.

In her best broken English she says  “You go Doi Suthep… on bicycle?” She then giggles and says “Nooo… too fahhhh foh bicycle!”

At this point I’m even more determined to conquer this ride, especially because I’m never one to back down from a challenge. Especially if it’s fitness related. I laugh and I tell her to watch out for me as I pass by the visitor center on the way down. 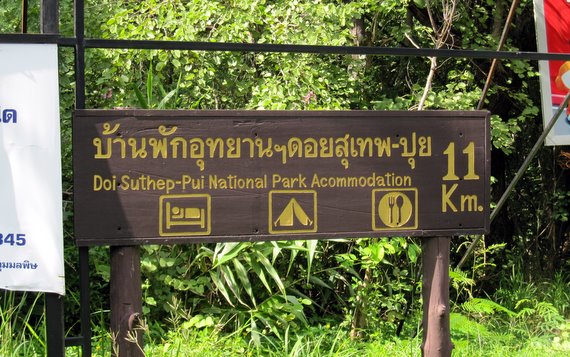 I jump back on my bike and start the ascent to Doi Suthep. As I’m pedaling one slow revolution at a time Thai’s on motorbikes are passing me with one of two reactions…

1. They stare as they pass by and the passenger actually turns all the way around to look back and laugh at me

2. They pass by honking the horn while the passenger throws up the incredibly motivating double thumbs up sign. (this is exactly what I needed)

Eventually I started getting more thumbs up than laughs, and that’s when I knew attempting to climb Doi Suthep on a heavy framed hybrid mountain bike was something that most people just couldn’t get their minds around.

As I’m climbing Doi Suthep I literally have no idea when I’ll arrive at the top. The only way I know how many miles I have left is when I see a sign every now and then telling me how many kilometers are left until I arrive at the temple. If I can remember correctly the first 3 or 4 miles of the climb are signless. Plus, when you’re riding uphill you’re certainly not going anywhere fast and that made it even tougher to gauge how many miles I had actually ridden so far. 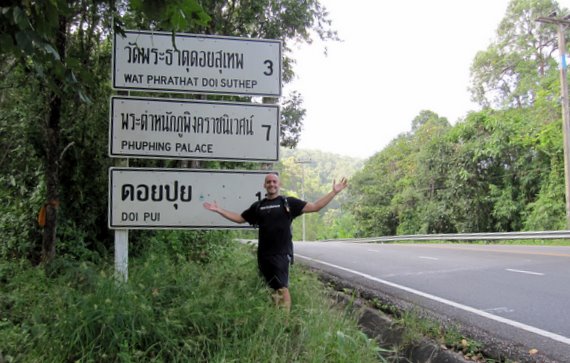 Suddenly I see a large sign up ahead which says that Doi Suthep is only 3km (1.86 mi) away!

The next sign says 1km, and before I know it I have arrived at the temple. I’m sweating profusely and many people are giving me strange looks. As a matter of fact I happened to see a few people leaving the temple that had actually driven by me on the way up and they were looking at me like… Wait a second… you made it all the way up here!?

A few more double thumbs up later and I’m on my way up the first few steps to the temple. Next thing I know I turn the corner only to see that I’m going to have to climb another 309 stairs before I reach the top! My legs are burning, stiff, and I feel as if people are looking at me wondering why I’m struggling to hobble up these stairs one by one at my young age. 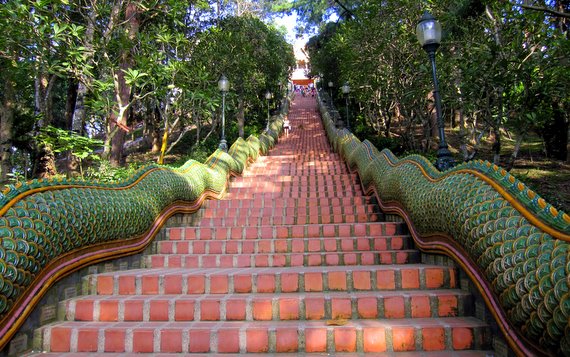 Once at the top I proceed to follow the signs that are literally everywhere reminding me that I’m a foreigner and that I should pay 30thb. After paying the 30 baht and entering the temple I was instantly amazed by the surroundings. It was as if the temple was covered in every color of the rainbow. There was tranquil music and dancing being performed by local children and more. 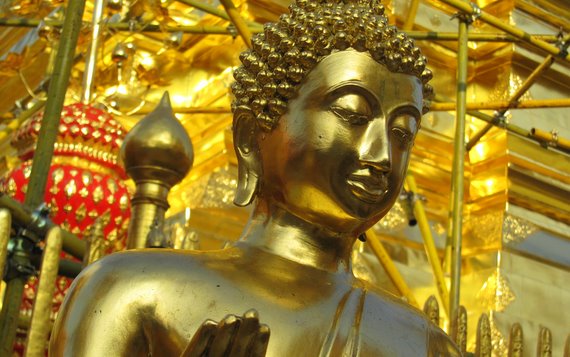 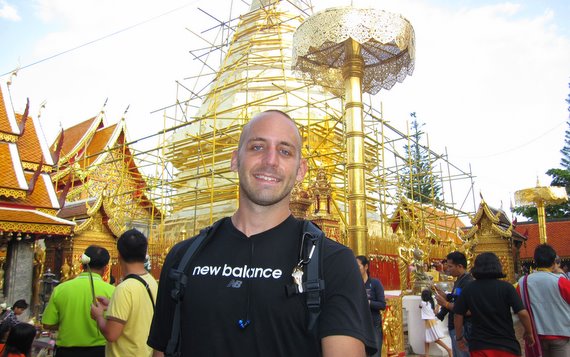 The views over the city were breathtaking. Here’s an idea of how high I had just climbed! 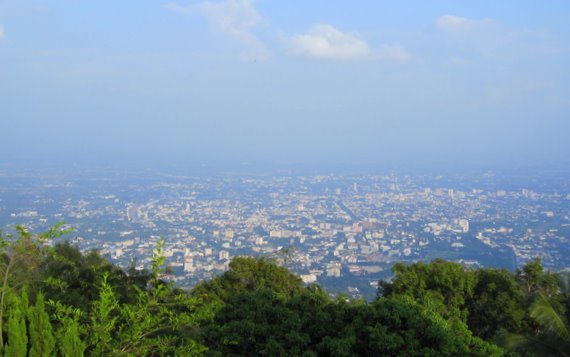 I have to say once I arrived at the temple the trip was that much more rewarding. Sitting down taking in the views and people watching was certainly interesting to say the least. I was hoping to find someone who was as sweaty as I was because I’d know that they most likely had just climbed Doi Suthep themselves. I had absolutely zero sympathy for anyone who looked like they just jumped out of an air conditioned car at this point.

After exploring Doi Suthep I headed back down to my bike and decided to get a move on. This is where the fun begins because it’s all downhill from here! Looking back on it now I wonder how I wasn’t killed on the way down. There were points that I was traveling at high rates of speed. Put it this way, I was passing people on motorbikes . No, seriously!

By the time I reached my apartment I was completely exhausted and ecstatic at the same time. I had just completed an 18 mile bike ride to Doi Suthep and back on a borrowed half way decent bicycle. Boy, do I feel accomplished.