Cruising Along the Coast of the Cape Peninsula 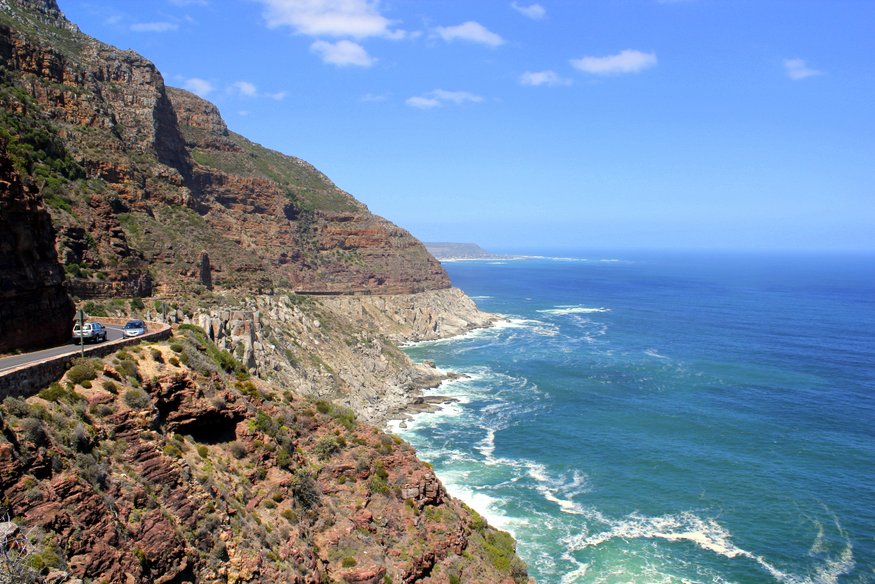 After our visit to Table Mountain, we jumped into the van and headed out on a full day tour along the incredibly picturesque Cape Peninsula.

Throughout our drive, our guide explained the history of several different neighborhoods that we passed by. My eyes widened as we passed by a coastal suburb  of Cape Town called Hout’s Bay.

Hout’s bay is a mixture of both rich and poor neighborhoods. Our guide went on to tell us that there was a house for sale in Hout’s Bay as we speak that is on the market for 80,000,000 Rand or the equivalent of $10.3 mil USD.

On our way to Boulder’s Beach, we stopped off  at a small parking lot along the beautiful cliff side road known as Chapman’s Peak Drive.

The view from Chapman’s Peak Drive allowed us to get a visual of where we had driven from a little earlier in the day.

Our next stop was Boulder’s Beach, a popular tourist spot due to the colony of African Penguins who made their home here back in 1982.

Fact: In 1982, there were two breeding pairs of penguins. Today, the colony has grown to more than 3,000 penguins!

For what ever reason, I just couldn’t wrap my head around the fact that there were penguins that could survive in warm climates. I guess I just always thought of penguins as cold weather animals.

Did you know that there were certain species of penguins that could survive in warm climates?

If you’re ever in the area, I recommend you check out Boulder’s Beach. It’s not only a great place to stop off and break up your Cape Peninsula tour, but it’s also a great place to bring your children if you have them in tow.

After doing some quality penguin watching, we stopped into Seaforth Restaurant for a quick lunch. In typical blogger fashion, we were all infatuated with snapping photos of each and every meal we ate.

Our last stop of the day was Cape Point, the southeast corner of the Cape Peninsula. Upon arrival, we snatched up our tickets and jumped on the Flying Dutchman Funicular to the base of the lighthouse.

After climbing a hundred steps or so, we had finally arrived at the highest point of Cape Point.

We took in the views of False Bay in the distance and got an idea of how far we were from several major cities like Paris, Berlin, Jerusalem, Rio de Janeiro and more!