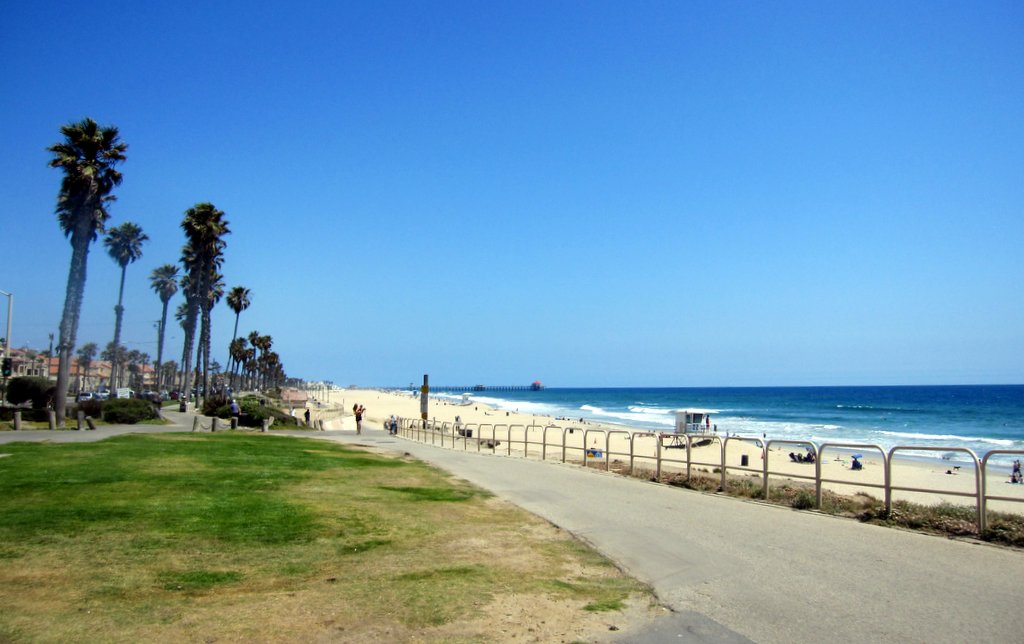 After a nice 47 mile cruise from Leo Carrillo State Beach to Hermosa, it was time for a couple relaxing days off.

We really couldn’t have asked for a better day off here in Hermosa Beach, California. What’s not to love about beautiful weather, friends, food, and beach volleyball?

Two of our friends from high school have been living out in Hermosa for the last few years and so when they heard we were going to be passing through town, they immediately reached out to us in hopes that we would stop off and spend a night or two at their place.

Of course, we couldn’t pass up an opportunity to get a couple comfortable nights sleep.

Once we got settled in we hung out with our friends over some food and drinks. Before we knew it, it was time to get to sleep as we had a long day of fun in the sun planned for the following day.

A BIT OF LUCK AND CALIFORNIA SUNSHINE

The next morning we headed off to the local corner store to grab some sandwiches and drinks before heading to the beach. It must have been my lucky day because I ended up spotting a bunch of rolled up bills lodged between a crack in the street. What I thought was a few bucks ended up being $50 dollars!

Could there be any better start to a sunny day in California?

We spent most of the day hanging down on Hermosa Beach playing volleyball and enjoying the seemingly never ending California sunshine.

Later on that night I met up with two long time fans of Pause The Moment (Araseli & Mike). They live in LA and have been following my blog for the last couple of years.

Mike and Araseli had reached out to me last year to see if I could help them plan their trip to Thailand. Once they returned from their trip and heard I was going to be in town, they wanted to give back by taking me out to dinner.

They picked me up in Hermosa and we drove out to a local Peruvian joint called El Pollo Inka. We had a delicious meal and got to have a good chat about their trip to Thailand.

Afterwards we splurged on one of those DIY Froyo joints before calling it a night. By the end of the night I had a feeling I’d see these guys again sometime. It just felt like we had this instant connection and that we would keep in touch.

Coincidentally enough, I already have a trip planned out to Los Angeles later this year to visit these guys.

OFF TO NEWPORT BEACH

The next morning Will and I woke up and hit up breakfast around the corner at Martha’s 22nd Street Grille with our buddy, Ryan. Afterwards, we packed up our bikes and hit the road yet again.

We weren’t sure how long our day was going to be yet but it turns out that we would end up riding a record 71 miles from Hermosa Beach to Newport Beach, CA.

Fortunately, most of our ride was on smooth bike path that winded its way alongside the beach.

Was it scenic? Sure, but at this point everything has become sort of like a blur to us. I guess you could say we’re numb to the scenery after riding 1,500 miles of Pacific Coast. At some point or another, the coast becomes the coast.

Once we reached Huntington Beach we made a short pit stop to grab a bite to eat and take in some of the sights around us.

One thing we couldn’t help but notice was all of the old creepy guys that park lineup their beach cruisers along the edge of the beach and inspect each and every inch of every girl as they walk by.

Is this what retirement life is like in Huntington?

We posted up in front of the Huntington Beach Pier for about 45 minutes before hopping back on the bikes and pedaling the rest of the way to Newport Beach.

Our WarmShowers host happened to be one of the loopiest host of our entire trip. She wasn’t loopy in a bad way it was just that she was so eccentric. Her husband was the complete opposite. He was the type of guy that would tell you what you’re doing wrong on your tour while his little old wife would be on her hands and knees trying to make sure you’re comfortable and you’ve got a full stomach.

Picture this. I’ve got my leg elevated and this woman is rubbing tiger balm into my injured IT band. Her husband on the other hand is in the other room talking to us about how he’s done more bike touring that we can ever imagine in destinations across the globe. Nice guy and all but man was he tough to converse with.

Unfortunately, I didn’t get the chance to get a photo of us with our Warmshowers hosts in Newport Beach but it was an interesting stay to say the least.

Only two more days until Mexico!