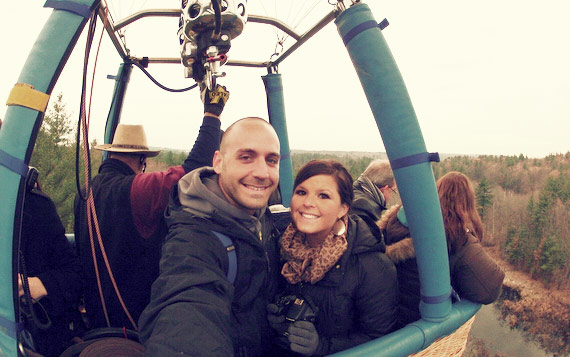 Those of you who have been following along for some time now might remember that last year Liz and I celebrated our 4-year anniversary at Inn by the Sea in Cape Elizabeth, Maine.

While I knew it would be tough to top last years anniversary weekend in Maine, I knew I was going to have something really special up my sleeve this time around since it was our 5-year anniversary.

A few weeks ago I posted: Surprise Hot Air Balloon Ride Gone Wrong and many of you thought that I botched my marriage proposal to Liz. If you missed the video, click here.

While I wasn’t planning on proposing to Liz, it’s nice to know that many of you think it’s about time I get down on one knee. Even if I had planned on originally proposing to Liz the first time around and it was botched by a cancellation in our hot air balloon ride, do you really think that I would give it a second shot after all of the speculation? C’mon now.

Since our first sunset balloon ride was cancelled due to the “low level winds”, we decided that we would schedule a sunrise flight instead.

Get this: 80 percent of the scheduled sunrise flights go as planned while only 20 percent of sunset rides actually take flight. This is an interesting fact to know when planning your next surprise hot air balloon ride. That tidbit comes directly from the owner, so trust me on that one.

We arrived at the rear parking lot of a New Hampshire Walmart at the crack of dawn. I’m not a big morning person but I was excited as hell to get this show on the road. 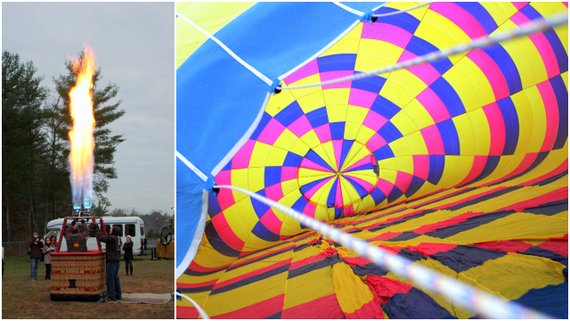 After some brief testing, our balloon was fully inflated and ready to fly. We were amazed at how quick you can unload a giant hot air balloon from a trailer and have it in the air. I’m talking all of this went down within 15 minutes or so. 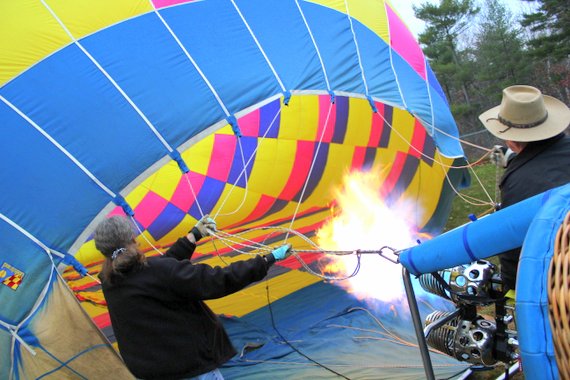 When we were told to hop into the balloon, we were confused. There was no way in hell we were fitting the pilot and four couples in this little basket.

Turns out, while there’s not a ton of room to move around, everyone fit in the basket perfectly. 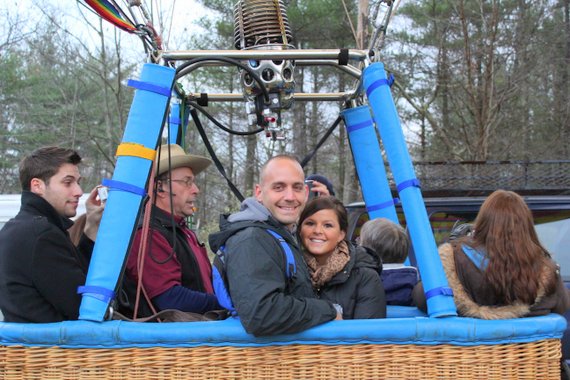 We had imagined the basket to be this giant woven contraption but it was about an eighth of the size we thought it would be.

Before we knew it we were touching the sky. While we didn’t fly high, we we’re happy to have at least got off the ground this time around. We cruised slowly above the tree line at a breakneck speed of approximately 2-5 miles per hour. 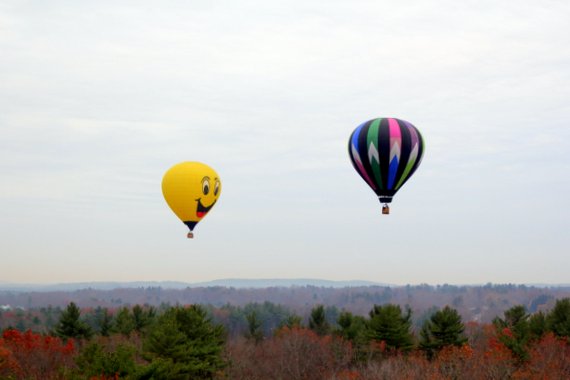 Our favorite part of the hot air balloon ride was when we crossed over a small lake. The water was so calm that the balloons floating above created a mirrored reflection on the surface. 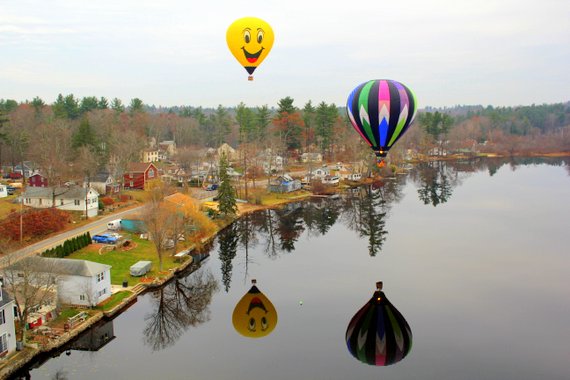 Once it was time to land, we had to figure out where in the world we would park three giant hot air balloons in a state that is roughly 86% forest. Put it this way, I was glad I wasn’t in charge at this point.

Luckily, we were in very good hands as our pilot Andre has over 25 years of flying experience. If Andre can’t land this thing, no one can!

One of the balloons ahead of us landed in someones front yard. Seriously, how cool would it be to wake up to a giant smiley face balloon in your yard as a kid? 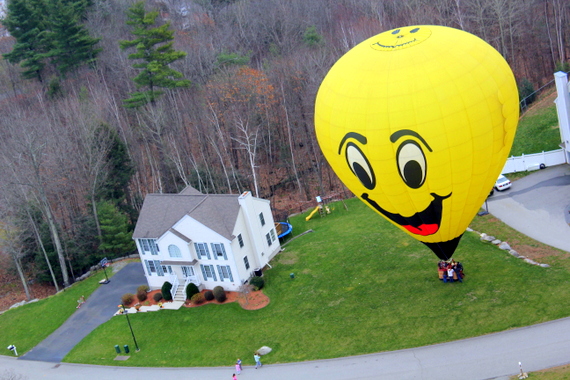 Supposedly it’s not the first time they’ve landed here either. The local neighborhoods welcome these guys with open arms. Hell, who wouldn’t?

The winds weren’t cooperating with our balloon as much as the others so we had to continue on to a deserted housing development a couple of miles later. 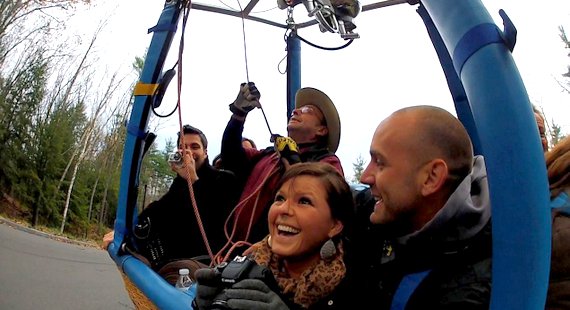 The landing wasn’t the smoothest one our pilot has ever experienced but we survived to tell the tale. A tale of our first ever hot air balloon ride on our 5-year anniversary!

Overall, we highly recommend that you experience your own hot air balloon ride. While we wouldn’t do another hot air balloon ride here in the U.S., we would love to take flight in a foreign country the next time around. In case you’re wondering where, well, Hot Air Ballooning in Turkey is high on our list!

Turkey, if you’re listening… hook us up with a flight over Cappadocia!

Don’t forget to check out A&A Balloon Rides operating out of New Hampshire. Andre and his staff were a pleasure to hang with and not to mention very experienced pilots. We felt safe through out the flight thanks to Andre’s cool, calm and collected personality. Thanks a bunch Andre!

Disclosure: Cloud 9 Living provided us with a complimentary voucher for a Hot Air Balloon Ride in exchange for an honest review. As always, all views and opinions expressed above are my own.