If there was one thing that we needed after leaving Vietnam, it was a small beach side bungalow on a quiet island with relatively no tourists. Sounds like too much to ask for, right?

Wrong! Luckily enough for us we chose the perfect time to visit Ko Lanta; during low season or what Lanta residents call “green season”.

“From the minute we arrived on Lanta we had a feeling that we were in the right place.”

You know when you finally get to a destination after long hours of traveling and you have this feeling inside you that you’re finally here and you must be here for a reason? That’s exactly how we felt once we stepped foot on to our top rated Klong Dao beach resort. 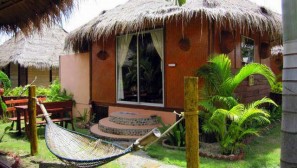 Due to it being green season in Ko Lanta, we scored a relatively unheard of deal at one of Lanta’s best resorts; Ancient Realm Resort & Spa. They also have a pretty engaging Facebook Fan Page as well.

Our sea side bungalow was just steps from beach as was the on-site restaurant and the swimming pool! Our original plans we to stay 2 or 3 nights at Ancient Realm before moving to another location on the island but that plan was quickly scrapped after spending our first night here. Once we realized the actual value we were getting for our money here at Ancient Realm, we ended up staying for a total of two weeks! 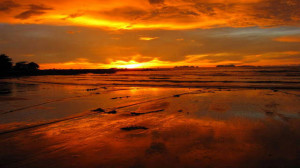 The sunsets on Klong Dao Beach in Ko Lanta were some of the best I’ve ever seen. If you’re looking for that picture perfect island with sunsets that consistently top the previous day, this is where you want to be.

To be honest, there are so many great places to eat on Ko Lanta that it’s hard to list them all so I will just list a few of our favorites.

We enjoyed every second of our time spent on Ko Lanta and we highly recommend this island to travelers who are looking for a cheap island destination that lacks the crowds of Ko Phi Phi, Ko Samui and other over developed Thai islands.

If you’re looking for a party island, Ko Lanta shouldn’t be your first choice or your second. There are far better islands for nightlife and partying if that’s your thing. Ko Lanta seems to cater to a crowd that enjoys the occasional drink or two, rather than a full scale full moon party if you know what I mean. Whether you’re looking for a romantic getaway or just a quiet weekend away in paradise, Ko Lanta awaits YOU!