How to Surf Monster Waves in Fiji 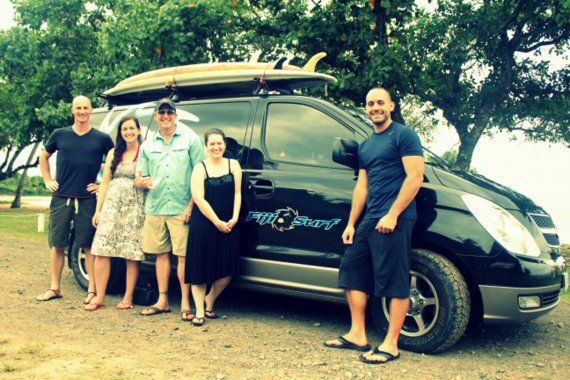 Learning to Surf has been on my travel to-do list for a while now. No, my wipeout on the Flowrider this summer doesn’t count, folks.

While I knew I would eventually get the opportunity to learn how to surf, I never thought that my first time hopping on a surfboard would be in Fiji.

Our instructors, John and Charlie from Fiji Surf Co. met up with us on Natadola Beach and prepared us mentally for our first ever surf lesson.

“Folks, be careful out there. The waves are pretty beast today and they’ll definitely take you under if you don’t keep your focus on one thing and one thing only. That’s shredding the gnar my friends!” ~ said nobody ever.

In all seriousness, the waves on Natadola Beach were just about non-existent this afternoon. So non-existent that I wasn’t even sure that we would be able to attempt to catch a wave. For a few seconds I sat there wondering what a surfing lesson be like without waves.

Back to the regularly scheduled program.

John started out by giving us some simple instructions about how to align your body on the surfboard, how to paddle efficiently and how to take that final step from lying flat on your board to getting yourself into a standing position and riding a wave.

After the instructions, I was eager to give it a shot. I had spent a good chunk of my younger years busting out tricks on a skateboard and cruising the slopes of New England on a snowboard. Not to be overly confident or anything, but I’ve got this whole surfing thing in the bag.

That is until I actually got into the water.

THE REALITY OF SURFING

I was so amped to get in the water and test out my newly acquired surf skills that I had just learned on the sand. Coincidentally enough, it’s a hell of a lot harder once you get in the water. I had no clue how difficult it would be to paddle out far enough to catch a wave in the first place. Sure, I’ve taken my fair share of leisurely swims in all sorts of destinations across the world, but using the correct strokes that will get you moving in a straight line on a surfboard left my shoulders exhausted early.

By the time I reached the point where I needed to turn around, my arms were completely spent. John yelled out to us when it was time to dig deep and paddle towards the shore. Each time John yelled out to us, I thought he was joking. I looked back and couldn’t see a wave in sight. I don’t know about anybody else, but I’m sure as hell not paddling my ass off for nothing. Not today, John! Not today.

Turns out this isn’t Johns first rodeo. It’s not his first time teaching people how to surf either. I should have known I could trust in him. Once the first few waves passed by me, I knew what I was doing wrong. I simply wasn’t following his instructions.

I noticed a small wave creeping up in the distance and at the same time I heard John yell out “paddle, paddle, paddle!” I whipped my board around on a dime and instantly started to dig into the water as hard as I could. Just as I started to feel the board rising underneath me, I made my move.

Within a split second, I went from being on my stomach to my feet. I flung my arms out wide and attempted to center my body over the invisible centerline of the board below me.

I started to daydream. All I could hear was Sublime – “Badfish” playing in the background…

This two-foot monster of a wave was taking me for my first ride and I was loving every second of it.

As I cruised towards John, he did what he does best. Shoot rad wide-angle photos of first-time surfers while making them look like Kelly Slater tearing up the waves. 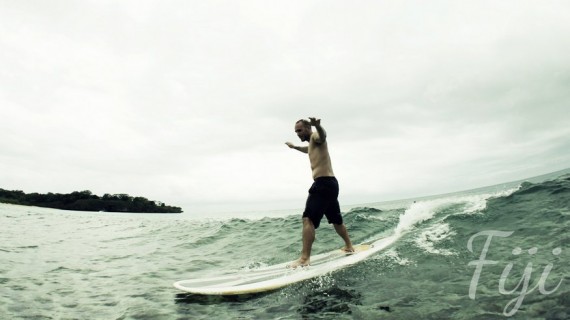 I tried my hand at riding a few more waves and I ended up catching one or two more on the day. I must say, not too shabby for a radical surfer dude like myself.

NOTES FROM A FIRST TIME SURFER

After wrapping up my first ever surf lesson with Fiji Surf Co., I jotted down a few notes about my first surfing experience.

3. Listen to your instructor! He/she knows what their talking about.

4. Wear a rash guard or your nipples will burn like mine are as I sit here typing this post. Trust me when I say they will burn for days.

5. Get out there and HAVE FUN!

1. Are you interested in learning how to surf? Leave a comment below and let us know where you would like to take your first surf lesson.