Prague: The Jewel of Eastern Europe

As you may or may not know, we’re slowly but surely making our way East to Asia. Our original plan was to fly from Paris to Bangkok, Thailand but we’ve had a tough time finding a decent price on a one-way ticket. After doing some research we realized that flying from Eastern Europe would be a heck of a lot cheaper. When the opportunity came up for us to fly to Prague we jumped right on it because my last visit to Prague two years ago had me yearning for more.

Rewind back to 2008 and you may remember my stories from my first ever CouchSurfing experience in Alicante, Spain. Anna, my host at the time was also hosting for her first time as well. Who would have thought that two summers later we would reunite in Prague?

We arrived in Prague after a short hour and forty-five minute flight from Paris. Our bags we’re just about the last ones off of the plane but it was nice not to be in any sort of rush to get to Anna’s flat. We jumped on a crammed public bus just outside of the airport and headed for the city center. By the time we navigated our way from the center to Anna’s place, we were absolutely exhausted. Upon arriving we were greeted by Anna and her flatmate Jake. It was so great to reunite with my first ever CouchSurfing host and what made it even better was that she had just moved into this new flat in Prague and I was now officially her first guest at the new flat. 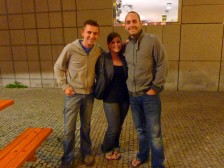 Coincidentally enough, a fellow travel blogger that I follow (Brock from BackpackwithBrock.com) was in town for the night and over the course of the last two months we’ve been trying to get together but we’ve been just barely missing each other each time that we’re in a neighboring country. Since Brock was only in town for the night I figured I would have to make the effort to get into town to meet up with him. It was great to finally meet him in person as I’ve been following his blog for quite a while now. We had a Czech beer or two while we chatted about his crazy experiences and encounters during his travels through Asia and India.  Before we knew it we parted ways as he was heading to Germany the following day and we really needed to get home so that we could catch up on some much needed sleep!

The rain was coming down in buckets on our first full day in Prague so we decided to stay in and spend some time getting to know Anna’s flatmate Jake. He’s Canadian and Czech and is currently an expat living in Prague. Since it was raining Jake and I both had intended to get a lot of work done as he works from home and I desperately needed to get some work done on the site. Keyword INTENDED. After hours of conversing, laughing, joking, exchanging our favorite YouTube videos, and realizing we had a hell of a lot in common we looked up at the clock in amazement to find that Anna would soon be getting home from work.

Anna invited us out to dinner with some friends and fellow CouchSurfers at a restaurant in the city called the Pizza Colloseum. The food was excellent and the people we met were even better! Some were from Czech, Poland, and even Columbia! Liz and I sat at the opposite side of the table as Anna and we were glad we did because it made us open up a bit and get to know some new people. 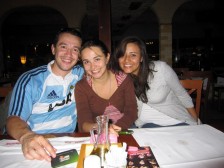 We had such a good time chatting with our new Columbian friends Orlando, Annie, and Maria. Orlando and Annie are expats living and working in Prague, and Maria lives in Barcelona but she’s currently being hosted by Orlando as it’s her first time traveling to Prague.

Our night only got more interesting when we experienced a divorce first hand as divorce papers were passed across our table between a man and a woman who were attending dinner with us. Talk about an odd situation. 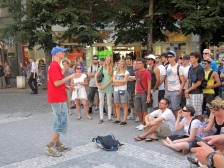 Our tour guide zigzagged us through parts of Old Town, the City Centre and the Old Jewish Quarter passing many sights along the way including St. Nicholas Church, Church of Our Lady before Tyn, Kinsky Palace, Statue of Jan Hus, Wenceslas Square, the Astronomical Clock, the Prague Castle, and even the Estates Theatre where Mozart’s premiere of Don Giovanni took place. Once we finished up on the tour we strolled along the Charles Bridge and looped back into town in order to head back to Anna’s. 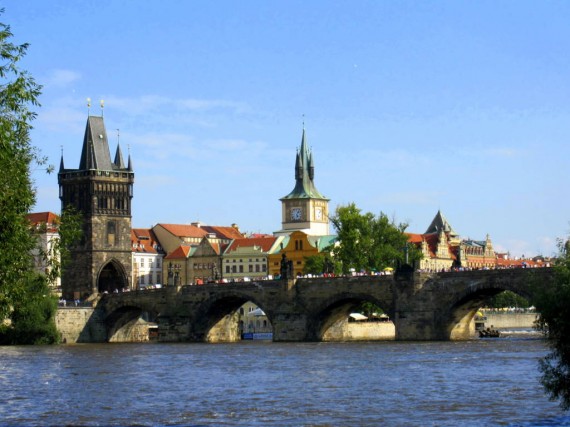 The next morning we headed into town and made our way to the railway station so that we could purchase our one-way train tickets from Prague to Krakow. After purchasing our tickets we came back to the flat and I caught up on some of my website work. Before long it was time for bed again. 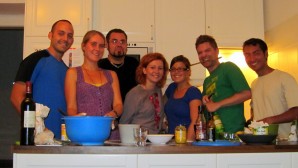 Our final evening in Prague turned out to be one of the best nights on our trip thus far. Anna, Jake, Clabbe, Ganesh, Whitney, Liz and I spent our last evening cooking and consuming samosas!

As usual, time flew and we we’re having so much fun that we had wished we could stay just one more night. Our time in Prague had unfortunately come to an end. Next stop… KRAKOW!