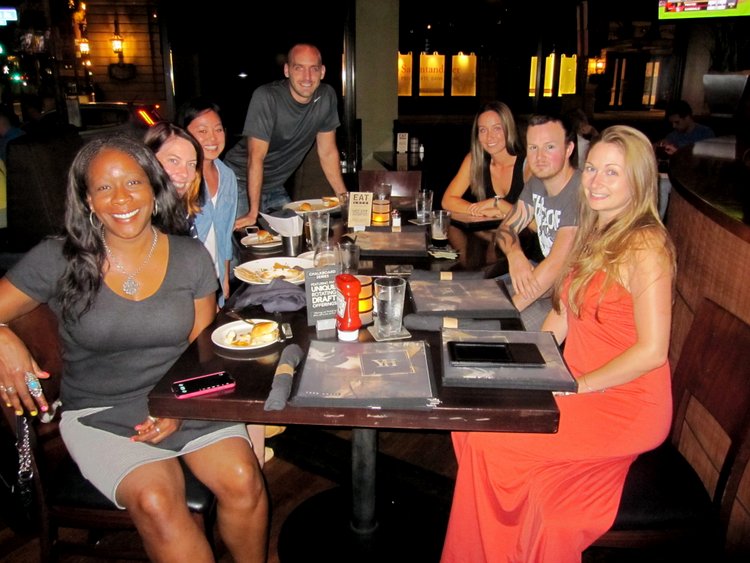 As many of you may or may not know, I was recently chosen as one of 11 bloggers, vloggers, photographers and influencers to be a part of an exclusive club called the Sony Club. This partnership between Pause The Moment and SONY simply means that I’ll be receiving all sorts of the latest and greatest gadgets from SONY to test, review and carry with me on my travels. If you know me by now, you’d know that I’m a total tech/gadget geek, so this is a pretty big deal for me!

The Sony Club orientation and initial meetup was scheduled for August 14th-16th in sunny San Diego! While I was super excited to be chosen for the Sony Club gig, I wasn’t incredibly excited about having to fly from Thailand to San Diego for a three day event. That’s one hell of a flight for just a couple of days. Fortunately, SONY had no issue with me extending my trip for a couple of days on the front and back end of the trip so my itinerary ended up changing from a three day trip to a six day trip. Now, that’s more like it! If it weren’t for Liz’s birthday on the 22nd, I would have definitely stayed a little longer. Why not, right?

On August 11th, I packed my bags and headed to the Chiang Mai International Airport. It wasn’t until a few days prior to my flight that I realized I would be overstaying my Thai visa by one full day by flying out on the 11th. Oops! I’m usually a stickler about following the rules and regulations of countries that I visit, but this was an honest mistake. My only hope was that I wouldn’t end up getting fined, or even worse being thrown in a Thai prison. Yikes!

When I arrived at the airport I made my way to check-in, snagged my tickets and tip toed towards immigration. I handed over my passport to the official and her eyes glanced towards me, then my passport, me, then my passport. I knew that overstaying my visa by 24 hours wasn’t the biggest deal in the world, but it was still illegal and I’m not one to break laws on the regular. Especially in a foreign country! The last thing I wanted was to be featured on a future epsiode of Locked up Abroad. No, thanks!

Fortunately, it was my lucky day. The woman asked me if I knew that I had overstayed my visa and I told her that I knew and that I was sorry. I told her that I realized and booked the next flight out in order to correct my mistake as soon as I could. She gave me a nod, signed off on my passport and waved me through. It was then that I could finally relax and really look forward to my upcoming trip to San Diego. 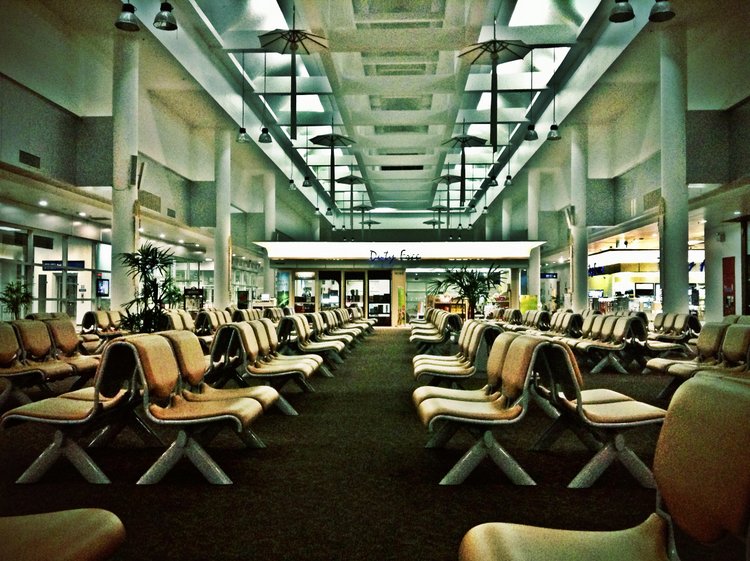 As you can tell from the photo above, I arrived to the departure gate a little earlier than most travelers due to worrying that I might be detained and never actually make it to the Sony Club event.

My first flight of three was from Chiang Mai to Seoul, South Korea on Korean Airlines. The flight was about five and a half hours if I’m not mistaken and it went pretty smooth. 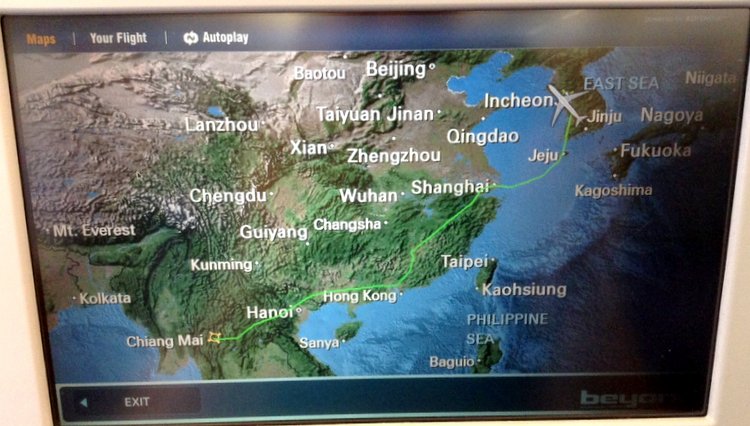 When I arrived in Seoul, I was really impressed by the fact that the government offers free tours of the city. Those of you that are connecting and/or laying over in South Korea might want to check out some of the fantastic tours offered here.

Get this, the government runs free tours for travelers laying over in Seoul and all of the tours depend on how long you’re connection is. For example, they have a variety of city tours for those who have 2, 3, 5, 7, and 9 hour layovers in the city.

Best of all, all of the tours are completely FREE!

Seriously, how awesome is this and why doesn’t every city offer something similar? I think this would be such a great way to promote tourism to destinations by giving people a sneak peek at the city.

I had a short layover so I stayed put, but I would definitely take advantage of the free transit tours next time I connect in Seoul. Good to know!

My next flight from Seoul to Tokyo was only a short hop of approximately two and a half hours and believe it or not it was the first time that I’ve ever been upgraded to business class! 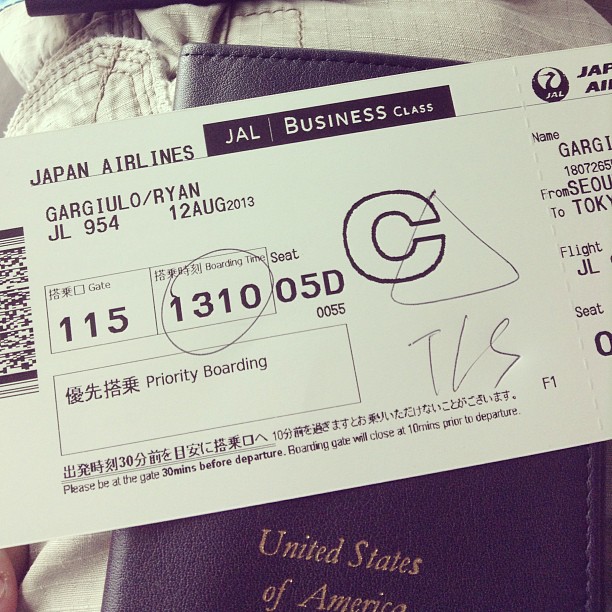 During check-in the staff member for Japan Airlines told me it was my lucky day and that I would be getting a free upgrade to business class. I couldn’t have been more thrilled! Actually that’s a lie. It would have been a hell of a lot cooler if I was upgraded to business on my 10 hour flight from Tokyo to San Diego. Then again, beggars can’t be choosers, right?

So I’m all excited, I plop down into my big, comfy business class seat and I instantly pass out. I don’t even remember taking off. I woke up to the sound of the intercom telling us to place our seats in the upright position as we were about to land in Tokyo. But, but… I didn’t get to take advantage of all of the business class amenities! Damnit!

I arrived in Tokyo and I was ravenous. Oddly enough, the Tokyo Narita Airport was one of the worst airports that I’ve ever been to in regards to finding something to eat. Maybe I was just in the wrong area? I couldn’t find anything to eat for the life of me. Starving, I boarded my final leg from Tokyo to San Diego and that’s when karma kicked in. 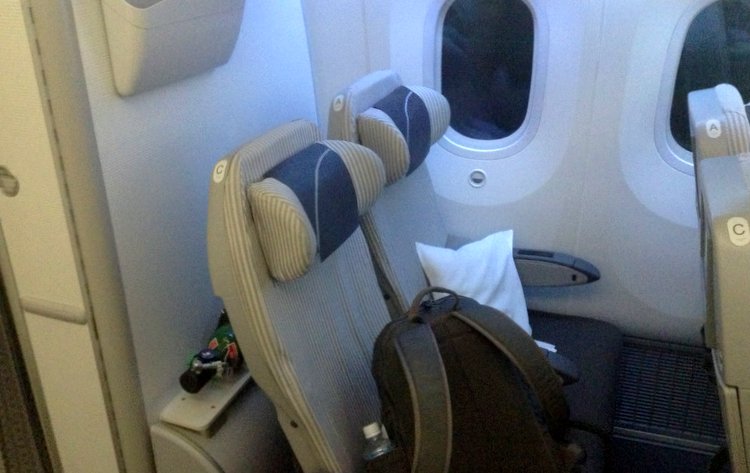 After flying business from Seoul to Tokyo, I was booked in a window seat in row 55 (last row on the plane) next to a guy that was coughing up a lung. Not to mention that this was the longest leg of the trip. I spent ten hours crammed in my seat, looking out the window in hopes that I wouldn’t get deathly sick thanks to the guy next to me. At least the views were alright… 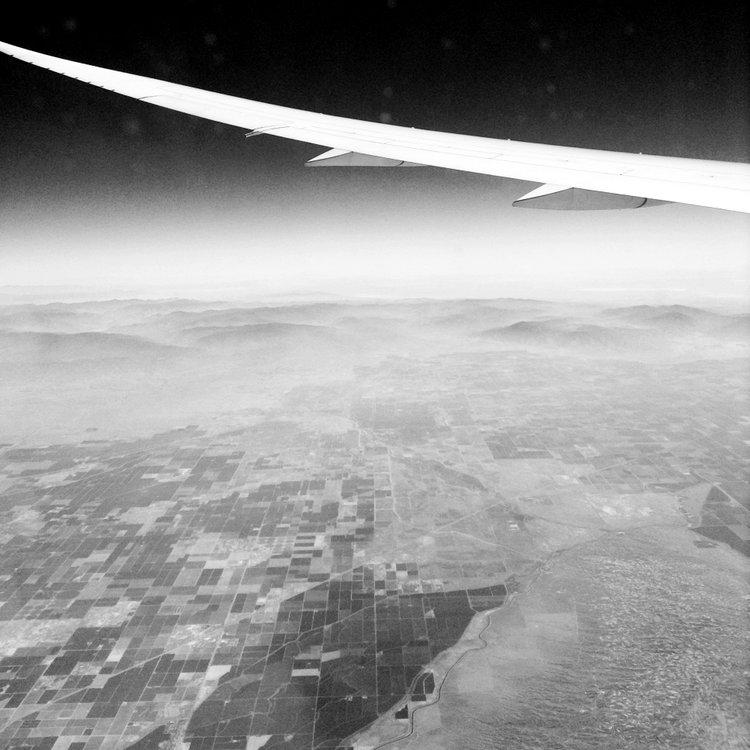 By the time I reached San Diego, I was a walking zombie. I ended up choosing the wrong line at immigration and that held me up for another 45 minutes to an hour. As soon as I finally spotted my baggage, I snatched it up and headed straight for the exit.

Considering my trip to San Diego was courtesy of SONY, they had me scheduled to stay at the W San Diego for two nights over the course of the event from the 14th-16th. Because I was arriving a couple days ealier, I had to secure my own accommodations before moving over to the W. Wanting to stay somewhere luxurious and comfy, I reached out to the Embassy Suites in downtown and they were nice enough to host me in a beautiful two-room suite for the first two nights of my stay. 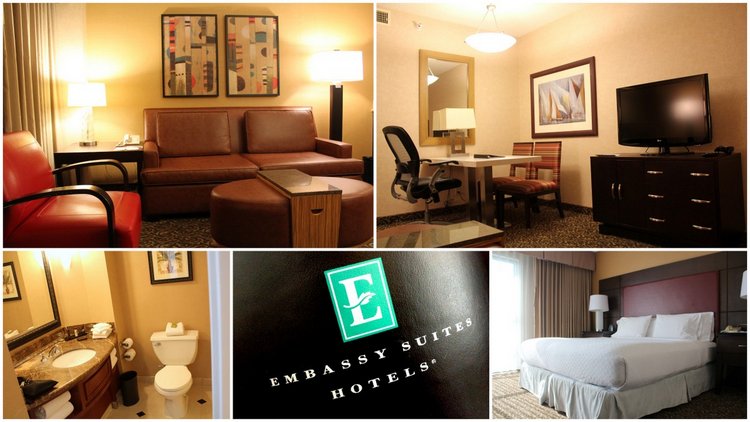 As soon as I checked into the Embassy Suites, I realized why everyone in the world loves the Hilton brand. The customer service is always on point and their hotels never cease to impress me. I wasn’t able to check-in immediately but that was no real issue. I needed to get some shopping done so I hopped on the trolley from Seaport Village to Hazard Center and headed straight for the first Marshalls I could find.

After having trouble finding what I wanted, I made my way over to the fashion valley mall where I found nothing, yet again. Argh! While I didn’t exactly find what I was looking for, I do have quite the story to tell you…

So I’m standing in Macy’s trying to log on to the free Wi-Fi and when a young couple stops me in my tracks. The guy (Chris) says… “Hey I know this might sound like a weird question but you look really familiar. Do you happen to have a YouTube channel?”

I was stunned for a second. Stunned and exhausted, I thought to myself… am I seriously being noticed in public by people who follow my YouTube channel? This is crazy! Coincidentally enough, it turns out that Chris had subscribed to my YouTube channel a couple weeks ago and started watching all of my videos in preparation for their upcoming trip to Europe.

What a small world, huh? 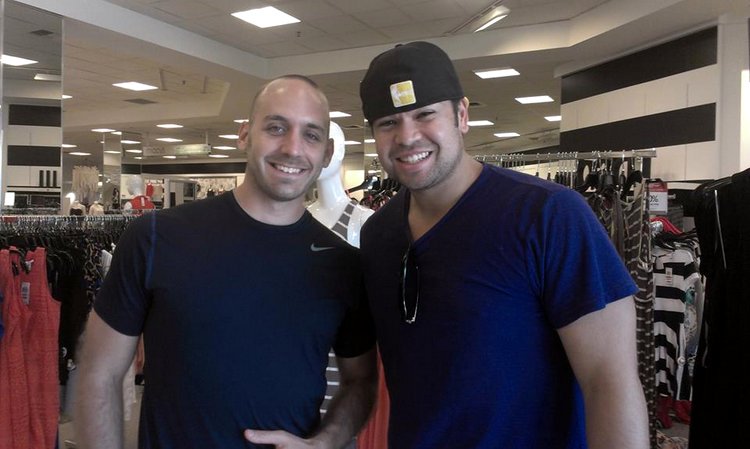 After a few minutes of talking travel, Chris and I snapped a photo and I invited them out to my first ever Pause The Moment travel meetup in San Diego the following night. They were psyched about spotting me in the mall and I was just as psyched to have been able to meet them. What a cool couple! These types of situations remind me why I do what I do. I can’t get enough of meeting new friends, especially those who share similar interests.

FYI to all of you out there who are following along, if you happen to see me out somewhere, PLEASE say something! ;-)

Once we parted ways I headed back to the hotel for dinner and I ended up passing out by 7:30. I got a much needed rest and awoke at 4:30 AM not knowing where I was. It took me a few minutes to realize that I was in San Diego. Don’t you hate when that happens? I fell back asleep for two hours and when I woke up, I headed out on a three mile run along the harbor. 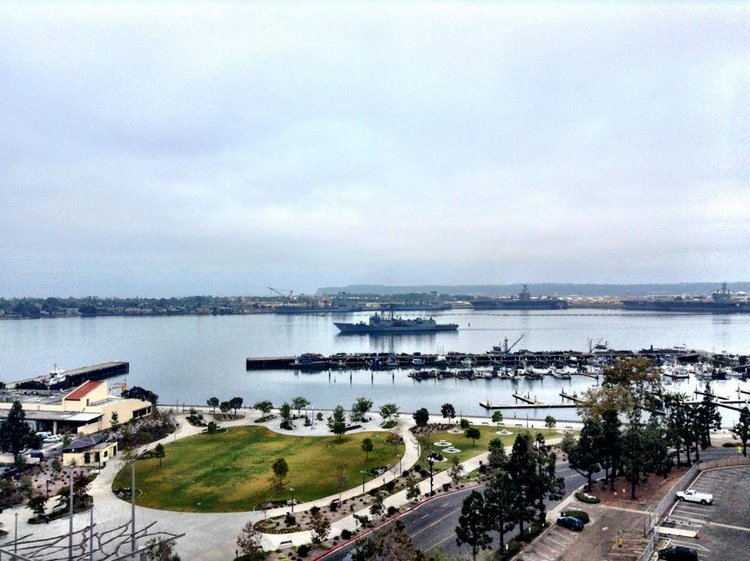 It felt awesome to be up early (6:30AM) and getting a good workout in. My first workout in the states in six months! Whoa.

That morning I spent a few hours hunting for new clothes and happened to randomly run into a guy from Italy while walking down the street. We chatted and ended up hanging out for most of the day in and around the downtown area. Turns out he’ll be back home in Bologna, Italy next month and we will be in Italy too so I’m thinking it might be cool to meet up with him in his home city. Once again, it’s just so cool to meet people from all around the world!

Later on that evening I hosted what would be my first ever travel meetup. Not knowing how many people would actually show up, I was sort of nervous that it would be just me sitting there like hmm… I know they’ll show up sooner or later. Funny enough, two people were already there waiting for me when I arrived. Once everyone started to show up, I was super excited!

We met at the Yardhouse in downtown San Diego and we had such a great time sharing a ton of laughs, travel stories, our upcoming travel plans, and all sorts of other topics over the course of a few hours. Here’s a few photos from the meetup…

Chris and Kara (the couple who spotted me in Macy’s) showed up but they ended up having to leave before we took the group shot above! Would have loved to have them in the group photo. Might have to photoshop you guys in! LOL. 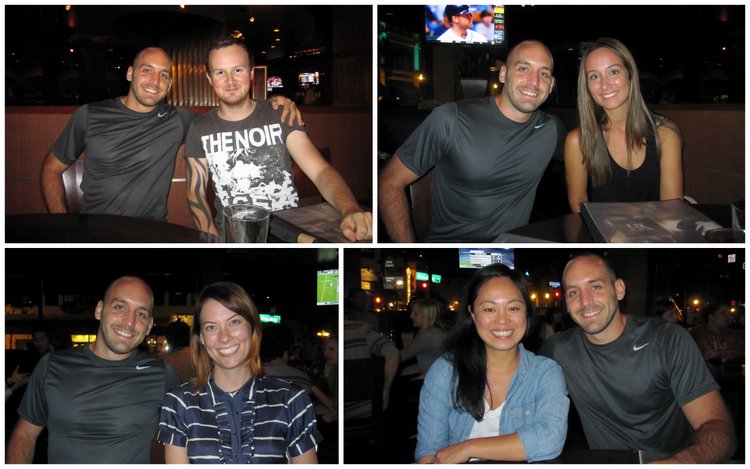 Well, that just about wraps up my initial two days in San Diego! Next up is the stories from the Sony Club meetup so be sure to stay tuned for more info about all of the talented people involved, the products we received from SONY. and so much more!