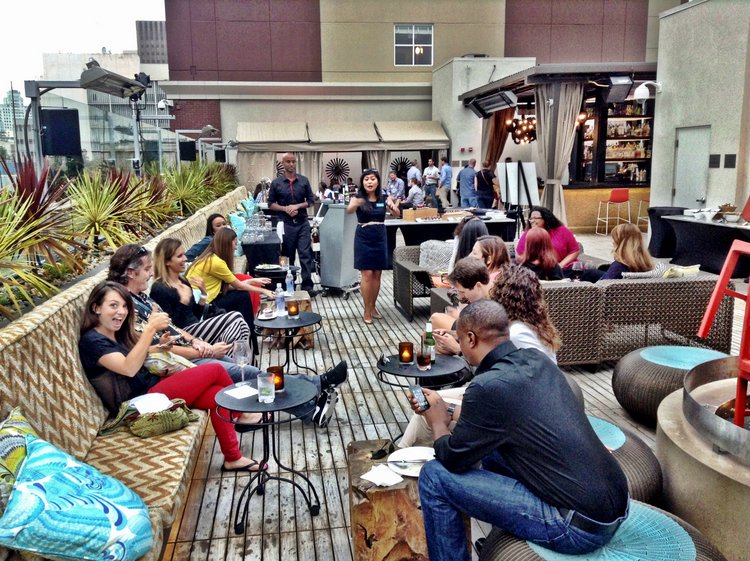 Did you miss?: San Diego and My First Ever Travel Meetup!

After taking advantage of the free buffet breakfast at the Embassy Suites, I checked out and made the short walk over to the W San Diego, my home for the next two nights courtesy of SONY.

I’m sort of a hotel geek these days so I was pretty excited to be staying at the W for the first time. I’m still not sure why I have yet to stay at a W considering all the places I’ve stayed at across the globe. The W’s lobby impressed me from the get go. I mean, take a look at this place! 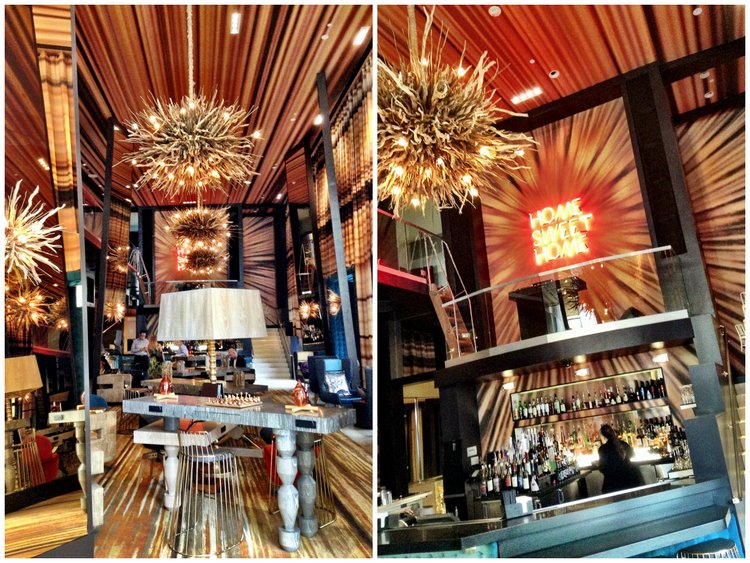 Is that not the craziest looking hotel lobby you’ve ever seen? If not, please be sure to leave a comment below with the name/photo of a hotel you’ve been to that is more eccentric than the W San Diego. I’d love to see it!

Upon arrival I was told that my room wasn’t ready yet (as expected) considering it was only 11:30 AM at this point. I had told my friend and fellow travel vlogger Kristen that I would wait there for her before I headed out anywhere as her flight from Toronto was landing at noon.

Before I knew it, my room was ready so I headed on up to drop my bags off. On my way up, I stopped by the pool which was incredibly disappointing. 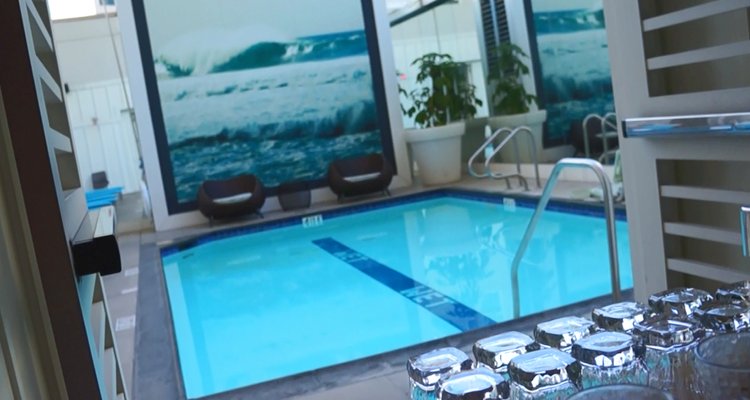 When I say it’s the size of an oversized jacuzzi, I mean it! Oh, and supposedly it’s a rooftop pool! Yeah, it’s on a roof alright. The roof of the second floor! 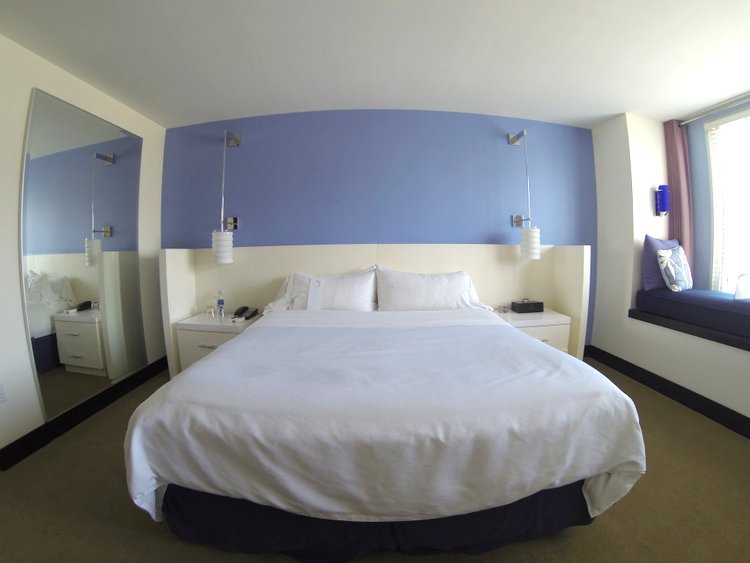 As far as the room goes, the decoration/colors were on point. It felt “boutique-y”, which is exactly how I like my hotels. I loved the white and purple-ish blue color combination. There was one special feature of the room that I absolutely loved and that was the built-in chalkboard on the wall. I have never seen that in any hotel around the world. Hotels, take note! This is genius! 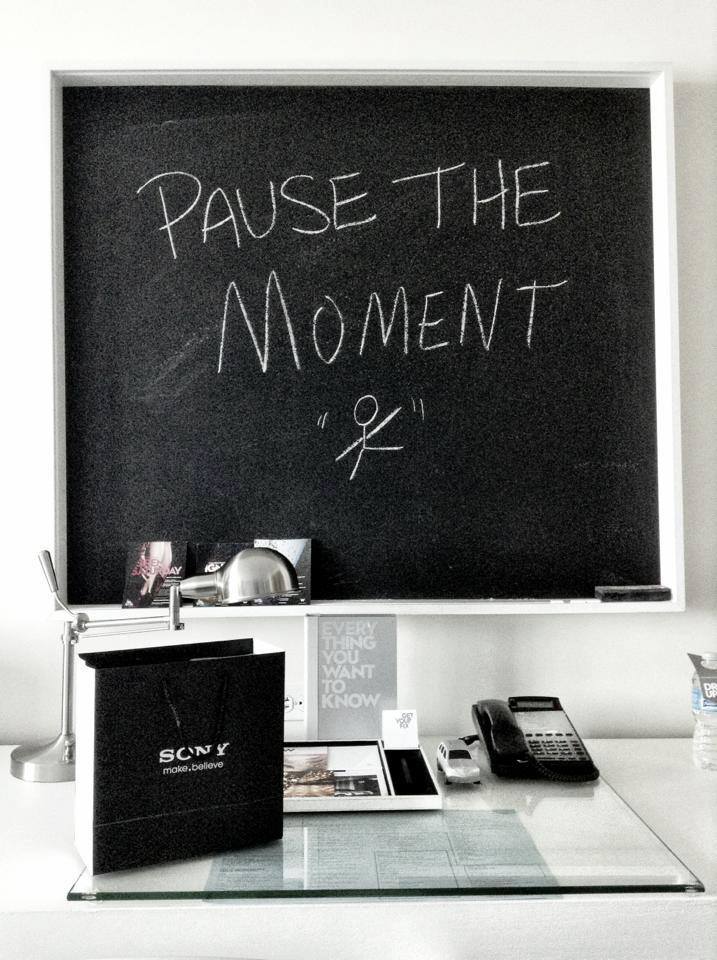 How fun would it be to write a new inspirational quote on your chalkboard each day to wake up to? Love it!

I wasn’t in the room two minutes before I received a knock at my door. It was the W Staff delivering a special gift bag from SONY. Could this be my gear!?

False alarm! No real Sony gadgets in there, just a few waters, snacks, an awesome camera lens mug and our full itinerary for the next few days. I filmed a cool unboxing video of sorts, you can check that out by clicking the graphic below. 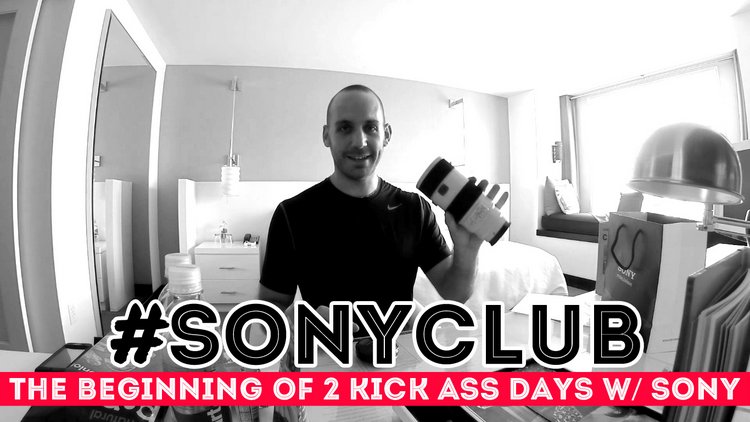 After filming the unboxing video, I headed down to meet up with Kristen. I was so excited to meet her after having chatted with her online just about every other day for the last who knows how many months. We met (virtually) through YouTube and the travel vlogging world a while back and we’ve been chatting about travel blogging, vlogging, potential collaborations and our love for the DiamondPR crew, a travel PR company that we’ve both worked on several projects with on several different occasions. The minute we met in person, it was as if we we’re best friends. Isn’t it weird how things like that work? 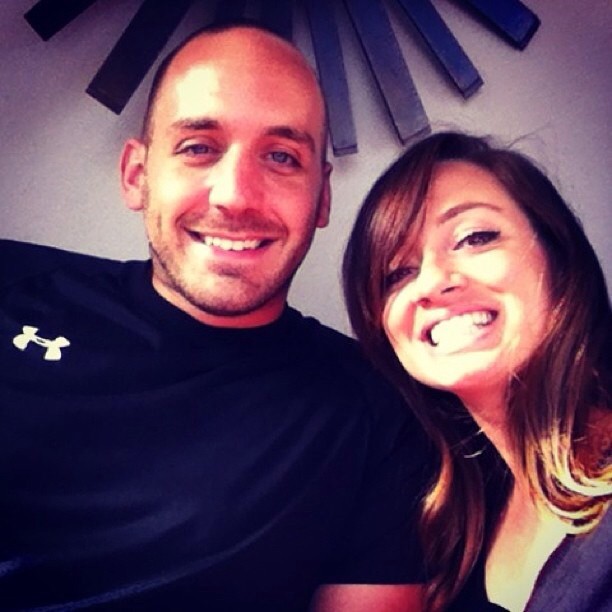 It was Kristen’s first time in San Diego, and California as a whole so I thought it would be cool to take her for a little stroll around the city that I’ve grown to know and enjoy. After visiting here three times over the course of the last year, I’d like to think that I’ve got a decent handle on navigating the city now.

We cruised around downtown and ended up finding ourselves a spot down by the harbor where a mega yacht owned by Russian billionaire Roman Abramovich is currently parked. 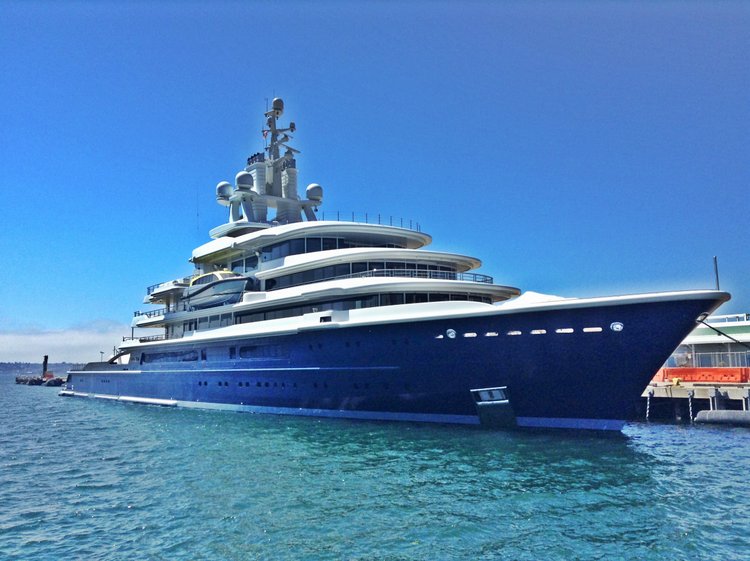 I won’t get too deep into the outrageous details about this yacht other than to say that it’s 377ft long, has two heli-pads, a speed boat, pool, spa, medical center, a crew of 40.

Oh, and did I mention that the “Luna” is Roman’s smaller yacht? Yeah, he’s also got the world’s second largest private yacht named the “Eclipse” coming in at an extra-lengthy 536 ft and costing upwards of 1.5 billion. Ugh! Enough said.

Reader Question: If you had all the money in the world, would you own a mega yacht? Leave a comment below!

Kristen and I spent about an hour chit-chatting along the waterfront before heading back to the W to get freshened up for our first official Sony Club meetup which was held on the rooftop of the W.

It was there that we met up with the rest of the Sony Club crew including the bloggers, vloggers, photographers and Sony Staff. Once again, it felt as if we all shared a connection of some sort. Then again, we all make a living (and some of us just get by) by blogging, vlogging, podcasting, or shooting photography, so maybe that’s why we understand each other so well.

Everyone was really friendly, outgoing and interested in what each other was up to. It was really inspiring to hear each persons individual story about how they started out blogging, where it’s taken them and the incredible opportunities that blogging has presented to them along the way.

I’m really not sure that Sony could have picked a more talented and professional crew, especially a group that gets along so well. Trust me, not all press trips and blogger/influener events work out this way. There’s usually an ego or two that gets in the way and separates the group from the beginning. Fortunately, we’ve been blessed with a group that I cannot say enough about.

Below you’ll find a list of my fellow Sony Club members and a link to their blogs. Go ahead, check them out!

Next up: Sony Club Day 2 – Product Demos and the Del Mar Races. You’ll get a behind the scenes look at all of the awesome SONY gear that we’re getting our hands on and I’ll be sharing my experiences from the Del Mar Races! Stay tuned for more.

Are you enjoying these updates? Let me know in a comment below.

Disclaimer: I am currently a member of the Sony Club influencer program, an exclusive group of bloggers from several different niches chosen to test and review the latest and greatest gear from Sony Electronics. As always, all opinions expressed are my own.