When Is The Best Time To Visit Egypt? 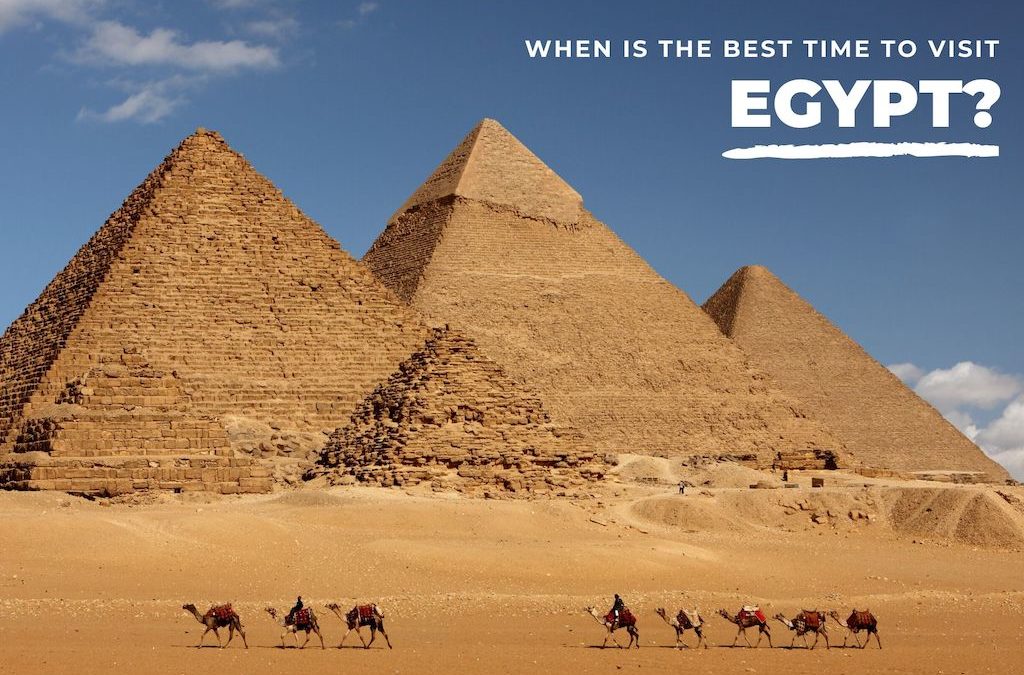 A question I get asked all the time is when is the best time to visit Egypt?

The answer is you can visit Egypt pretty much year-round although I recommend that you avoid visiting during the hottest months of the year (July / August).

Peak season in Egypt is typically between late November and January.

At this time, the weather in Egypt is at its coolest and this is referred to as Egypt’s winter season.

Due to the dropping temperatures, visitors consider this to be the best time to visit Egypt.

Flights to and from Egypt are generally more expensive due to the increase in tourism and the rise of hotel rates during this period.

The low season in Egypt runs is typically from June through the end of August.

July and August are the hottest months of the year and I recommend avoiding travel to Egypt during these months.

The average temperature in Egypt during the summer months can rise well above 40 °C / 104 °F during the daylight hours therefore making sightseeing almost impossible.

If you do manage to visit Egypt during this time, the one benefit will be that you’ll have the upper hand when it comes to scoring deals on hotels, activities and more.

Weather in Egypt Year Round

The weather in Egypt generally varies between moderate to hot for the majority of the year and then it becomes extremely hot from mid to late June through the end of August.

Egypt experiences sweltering summers that can be very dry, but you can find humid temps along the Mediterranean Coast and the Delta.

During winter the temperature drops significantly and some places will receive a bit of rain.

However, even during the winter months, you can count on having bright and sunny mornings and afternoons followed by cooler temperatures during the night hours.

Best Time to Travel to Egypt

If you are looking to enjoy a trip to Egypt, the best time to travel there is either between mid September through November, or late February through early April.

During these months, the weather in Egypt is still relatively cool and there are typically fewer tourists making their way to the many tourist attractions on offer in the country.

Weather in Egypt by Month

Weather in Egypt in January

January brings what some consider to be the best weather in Egypt, which is why more people visit during this time of the year.

Unlike the typical Egyptian weather which has scorching temperatures during the day, January is Egypt’s winter season so the temperatures cool down significantly.

The weather around Egypt averages around 22 °C / 71 °F during the day and cools down enough at night that you’ll likely want to request an external heat source and to pack some warm clothes.

During the month of January, you can confidently wander around without the fear of heatstroke or a need for sunscreen.

Weather in Egypt in February

In February, winter has begun to pack its bags and the temperatures start to increase ever so slightly into the lower to mid 20’s (71-73 °F).

Please note that the temperatures will still drop at night, but a few blankets and a fire will make your nights that much more comfortable.

There is also the chance that some parts of Egypt will receive some rare rainfall during February.

Weather in Egypt in March

As soon as March rolls in, the weather in Egypt becomes a little unpredictable.

However, the weather is still pretty enjoyable, with daytime temperatures hovering around 23 °C / 73 °F.

March is definitely the beginning of t-shirt weather, but even in the hottest time of the day, you won’t find yourself being chased indoors by the cold.

Weather in Egypt in April

Many visitors to Egypt often consider April to have some of the best weather of the year.

T-shirt weather is in full swing and you’ll find many tourists wearing shorts (below the knees for men) and long dresses (for women).

Weather in Egypt in May

In May, the weather in Egypt becomes significantly warmer and sunnier during the daytime.

While it is can be hot during the day, it might still feel a little chilly by night, depending on the seasonal weather patterns.

Regardless, the month of May is one of the best times to visit Egypt as you can move around during the day without worry that it will be too hot to visit some of the top attractions.

Prices during the month of May are also reasonable, so you can have a great time visiting Egypt without breaking the bank.

Weather in Egypt in June

The weather in June can be a little unpredictable in the sense that the weather can be be relatively mild, or it can skyrocket and quickly turn into one of the hottest times of the year.

Generally, however, the weather in Egypt is tolerable in June and is great for people who really love to be out soaking up the sun.

In June, the evening hours start to feel much warmer than previous months with some places like Siwa receiving night time temperatures of 20 °C / 70 °F.

As the afternoon heat can spike, it is usually advisable for people to be indoors between the hours of 2:00 PM to 5:00 PM.

Weather in Egypt in July

As mentioned above, visiting Egypt in July is not recommended due to the fact that this is one of the hottest months of the year in Egypt.

Tourists tend to avoid Egypt during these months, making it a great period of time to visit for those who don’t mind extreme temperatures and those who are traveling to Egypt on a budget.

If you do happen to visit Egypt during July, please make sure to bring sunglasses, wear lots of sunscreen and drink lots of water.

Weather in Egypt in August

Along with July, August is the next hottest month in Egypt.

Most tourists purposely avoid visiting Egypt during this time and some of the wealthier Egyptians actually travel to destinations with cooler temperatures as the heat is exhausting.

Those who are planning on visiting Egypt on a budget will find that the prices for accommodation, sightseeing, and other activities are at their lowest during the month of August making it a great time to visit.

Weather in Egypt in September

In September, Egypt starts to get a break from the scorching heat of the summer months and more travelers start to find their way to this beautiful country.

Midday temperatures can still be extreme at times and the sun is still fierce enough to warrant sunscreen.

However, the early evenings are cool enough to allow free movement and the evenings can be enjoyed without an extra warm layer of clothing.

The last week to ten days of September are absolutely beautiful and the weather during this time makes for an excellent time to visit Egypt.

Weather in Egypt in October

October marks the very early stages of the high season and the coming of Winter in Egypt.

After the second week of October, the days start to cool down but there is still plenty of sun and warmth for t-shirts and light clothing.

Nights will start to be cooler but will still be comfortable enough to not have to throw on extra layers other than maybe a light sweatshirt or jacket.

Weather in Egypt in November

Once November comes, the weather in Egypt has already begun to take a turn towards cooler temperatures and tourists will have begun to arrive, slowly but surely.

Prices will still be relatively modest and you can still visit without leaving with an empty wallet.

Temperatures can still get pretty hot during midday, but the rest of the day is moderately warm.

Packing a jacket or fleece is a good idea for the evenings in November.

Weather in Egypt in December

By December, the winter in Egypt is officially underway.

The days will be slightly warm, while the nights will be a little bit on the chilly side.

You can get away with wearing t-shirts in the daytime but we recommend bringing an extra layer of clothing just in case you need to cover up.

While the weather will be relatively warm, you won’t necessarily need to worry too much about wearing sunscreen.

Even during the afternoon when the day is meant to be hottest, you can still wander around and enjoy the city of Cairo.