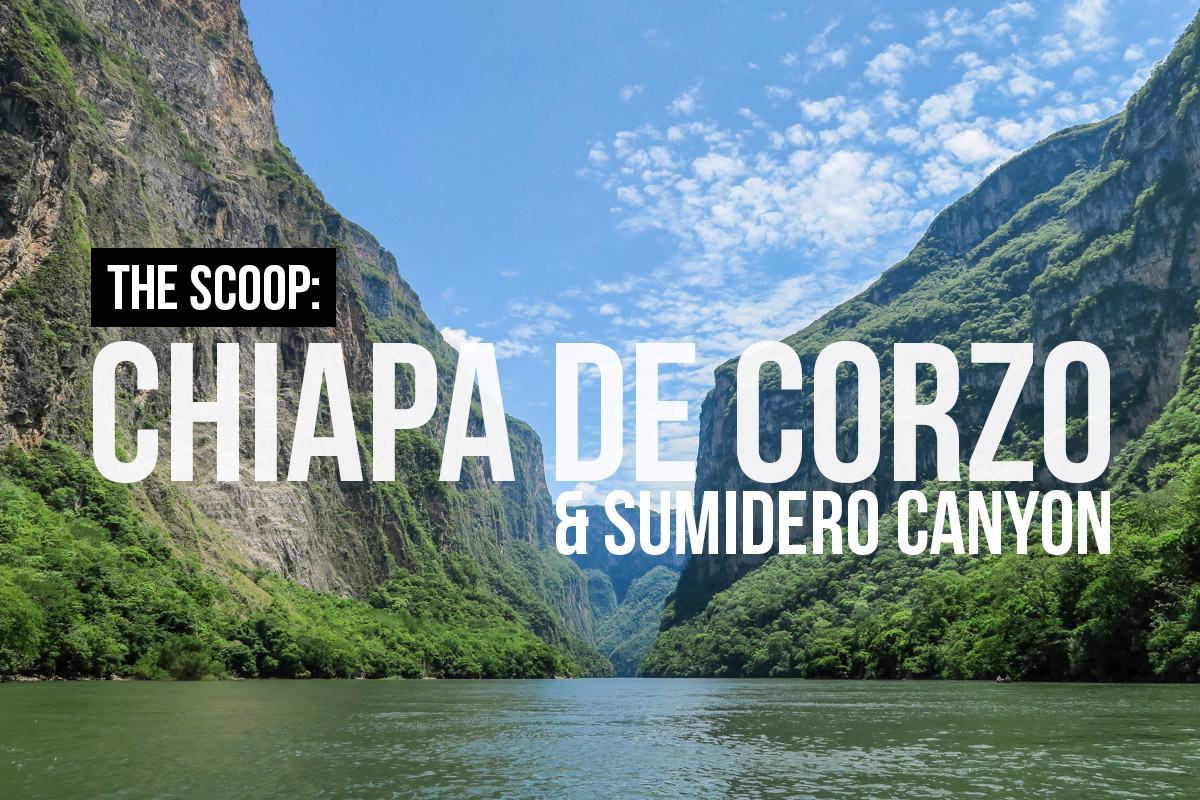 You’ll find it all and much more in the charming colonial town of Chiapa de Corzo, located off the beaten path, 12km east of Tuxtla Gutierrez, in the Mexican state of Chiapas.

The town has been designated as one of Mexico’s Pueblos Magicos, or magical towns, because of its significant cultural heritage.

Those few intrepid travelers who have already discovered this often overlooked destination describe it as a relaxed, easygoing town framed by the warmth of the local people.

Perhaps best known as the jumping off point for exploring the magnificent Canon del Sumidero, Chiapa de Corzo has plenty of history and attractions within the town itself that make it worthy of spending a day if not two there.

While it’s popular with Mexican tourists, the notable absence of gringos and large tour groups make it enticing for those seeking a truly authentic experience.

Located on the north bank of the Rio Grijalva, Chiapa de Corzo has the distinction of being the oldest colonial town in Chiapas.

Get ready to step back in time.

Legend has it the Spaniard Deigo de Mazariegos laid claim to the land and founded the town when his army invaded a settlement of indigenous people.

Rather than surrender, the natives jumped to their deaths from the cliffs of the nearby Canon del Sumidero.

It is with this backstory in mind that in Chiapa de Corzo’s main plaza the La Pila Fountain stands like a sentinel dating back to the 16th century.

Legend tells the story of the monumental red-orange brick fountain with its octagonal design, arches, flying buttresses and domed roof being built to resemble the Spanish crown.

While air travel will not take you to Chiapa de Corzo directly, it is recommended to fly into Tuxtla Gutierrez International Airport also known as Aeropuerto Internacional Ángel Albino Corzo which is just (7.5 mi / 12km) from town.

Click on the button below to head on over to Skyscanner and find the best deals on flights.

SEARCH FOR THE CHEAPEST FLIGHTS TO TUXTLA NOW →

You can easily drive to Chiapa de Corzo, located 12km east from the city of Tuxtla Gutierrez.

All you need to do is follow the Federal Highway 190, also known as Panamericana and you’ll see signs pointing you in the right direction.

It takes about 45 minutes and you will be dropped off on the north side of the town’s main plaza.

If you are based in San Cristobal and feeling adventurous you can take any of the combis to Tuxtla Gutierrez and ask to be dropped off at the junction and then hail another colectivo heading east to Chiapa de Corzo. No worries, it’s much easier than it sounds.

Things to See and Do

The Rio Grijalva boat tour is a must! Crocodiles, spider monkeys, white herons are just a few of the wildlife you’re likely to see during your journey along the river.

The river is also the best way to travel to and experience the wonder of Canon del Sumidero (more information on this below).

The original bells, cast in 1576, from copper and weigh more than 10,000 pounds and are still used today.

The adjoining house was a former convent and is now home to a cultural center and museum.

If you are ready to channel your inner Indiana Jones, the archaeological site of Chiapa de Corzo is worth a visit.

Between the years of 850-450 BC is was a major ceremonial center.

Be sure to make time to explore the backstreets and local markets.

If street art strikes your fancy, on the east side of the church you’ll find a few murals and be sure to look for the street art on the road that runs parallel to the river.

By now you must be getting hungry! Chiapa de Corzo is also known for its culinary delights and cooks up a variety of local dishes unique to the region.

Feast on many different types of tamales, peptic con tasajo which is thinly cut beef served in a special pumpkin seed sauce or cochinito horneado, a roasted pig flavored with adobo sauce.

Canon del Sumidero is a spectacular must-see and it’s the number one reason people visit Chiapa de Corzo as it’s the main attraction in town.

Sumidero Canyon is a narrow and deep canyon carved out by the Rio Grijalva, a major river which flows north along the canyon’s floor.

The creation of the canyon began around the same time as the Grand Canyon in the United States.

Yeah, you can compare the awesomeness of Canon del Sumidero to the Grand Canyon – it’s that

Picture this – canyon walls stretching toward the sky some 3,200 ft/1000 m tall as the river makes a run through its narrow passageways.

and lush vegetation color the riverbanks in a display of natural wonder.

The interior of the canyon has it all – whitewater rapids, waterfalls, beaches and even freshwater springs and caves you can explore.

One of the caves is called the Cueva de Colores – Caves of Color -Its name comes from a number of minerals which form colors on the cave walls, most notably varying shades of pink.

Inside there is also an image of the Virgin of Guadalupe.

If you’re so inclined bring some fresh flowers or candles to leave behind as an offering.

You can also explore the Cueva de Silencio – the Cave of Silence, named for its lack of an echo or any other kind of interior sounds. Spooky silence – perhaps. But also super cool!

Canon del Sumidero is also home to a number of endangered species like the Central American River Turtle and the American Crocodile.

The crocs can be spotted often catching rays on the banks of the river.

Surrounding the canyon is the Canon del Sumidero National Park which spans four municipalities in the state of Chiapas.

At the north end of the canyon you’ll find the Chicoasen Dam which is vital for storing water and is one of Mexico’s most important sources for generating hydroelectricity.

As the canyon is the second most visited site in the state of Chiapas, after Palenque, commercial activity inside the national park is limited to those who serve tourists, sell food and Mexican handicrafts and folk art.

Note: Some visitors have remarked about the trash alongside the riverbanks, but nonetheless were awe-inspired by the canyon’s natural beauty and the connection they felt to Mother Nature while they were there.

Getting to Sumidero Canyon

So you want to visit Canyon now, right?

Well, if you are driving you can get a bird’s eye view of the canyon thanks to the five lookout locations along the highway.

But the best way to experience the majesty of the canyon is by boat tour.

You’ll see signs pointing you in the right direction.

Tip: Be sure to bring you camera because you’re you want to miss capturing snaps of beautiful canyon and the wildlife, including the crocodiles sunning themselves on the riverbanks.

The Canyon del Sumidero river tour will also take you past some of the caves along the way.

Tour operators can be found in all surrounding destinations including Tuxtla Gutierrez, San Cristobal de las Casa, Palenque and Villahermosa.

For some who want convenience and would rather forgo the work of organizing a trip on your this can be a good option.

You can search for tours by location and often times make reservations online.

Not feeling adventurous enough to make your own way to Chiapa de Corzo?

No worries. I’ve got you covered.

If weather is your main consideration you need to understand the high altitude (450m) and mountainous terrain make for a varied and somewhat unpredictable climate.

It can get very warm in the summer and equally cold in the winter, with rain occurring of the year.

The best advice is to pack for any and all weather conditions.

If your desire to visit is driven more by events and local happenings then January is the time to go.

During this religious and traditional celebration (colorful, costumed dancers) fill the streets in a lively display.

It’s regarded as one of the most important cultural events in the state of Chiapas with some historians estimating the fiesta has origins dating back to the 17th century.

Where to Stay in Chiapa de Corzo

Most hotels are in and around the side streets located near the main plaza (zocalo).

Prices start around $150 pesos per night and upwards for a single room, with attached bathroom and hot water.

For those seeking adventure, wonder, and a truly authentic experience in Mexico, a trip to Chiapa de Corzo combined with an excursion to Canon del Sumidero should be at the top of your bucket list.

Few places have been able to retain their connection to their past and cultural heritage in the way Chiapa de Corzo has done.

The lack of tourists and tourist infrastructure in town afford a sense of discovery that takes you back in time and will inspire even the most traveled of travelers.

Of course, there is no escaping the grandeur or majesty of Canon del Sumidero.

It’s a breathtaking display of some of Mother Nature’s finest work.

A visit there is sure to be a singular experience that will stay with you long after the journey has ended.

So, what are you waiting for? Time to start planning your next trip to Chiapa de Corzo and Canyon del Sumidero!

Did you enjoy this article?

If so, please help by sharing this with your family and friends using the social sharing buttons below.