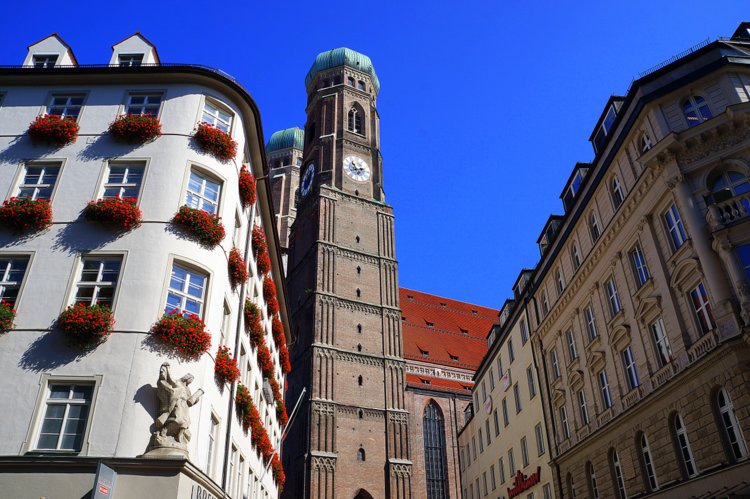 Saying goodbye to Chiang Mai was no easy task. We took what would be our last ride (of 2013) to the airport to hop on a quick flight to Bangkok followed by an eleven and a half hour flight to Munich, Germany.

By the time we touched down in Munich, our sadness from leaving Chiang Mai had worn off and the excitement of being back in Europe again was at an all time high.

We purchased our tickets for the S1/S8 train line (10.20 Euro) which whisked us directly from the airport to Hopbahnhof Station (Munich’s Central Station) in approximately 45 minutes time. After making our way through the maze of underground tunnels at Hopbahnhof station and getting over some slight navigational issues, we finally figured out that we were just two minutes from Wombats Munich, our home for the next couple of days. 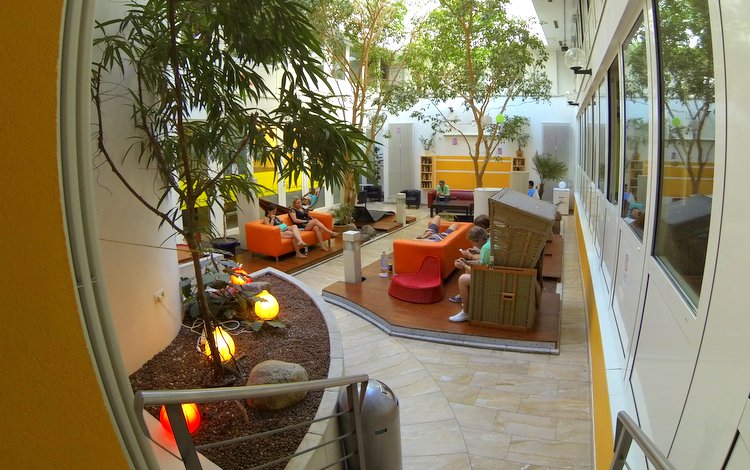 After checking in, we headed up to our tiny little room, dropped our bags and took one last short stroll around the city before heading back and catching up on some much needed sleep.

The following morning we awoke to a cloudless sky and sunlight beaming through our window. We had no real plans for the day other than to explore the city. We left the hostel and headed for Marienplatz, also known as Munich city center. 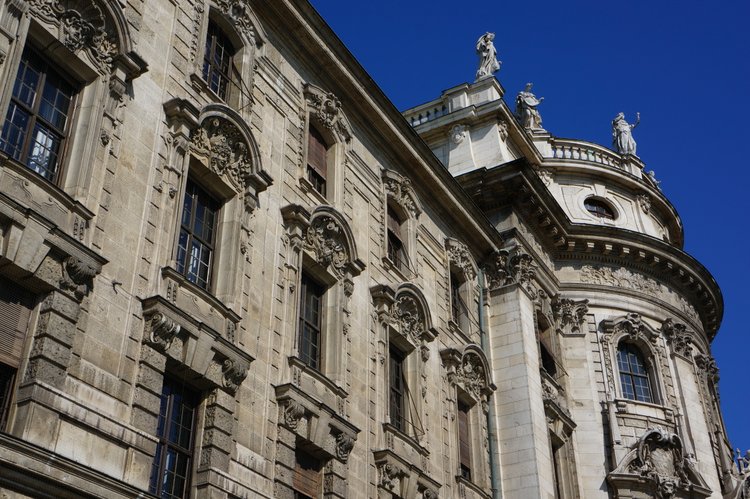 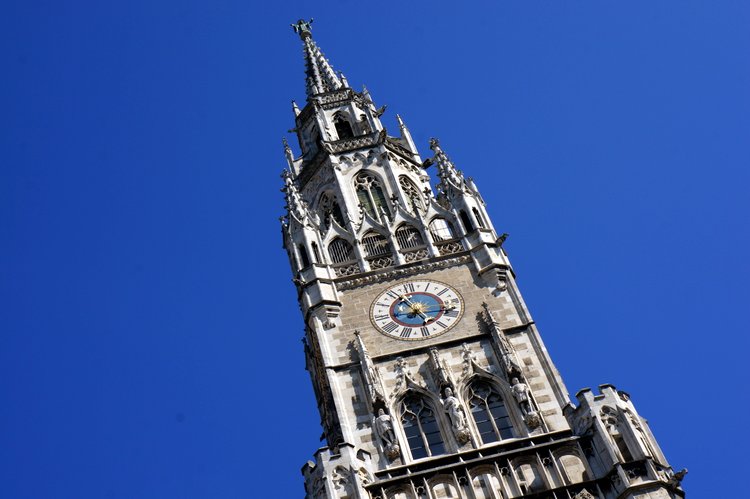 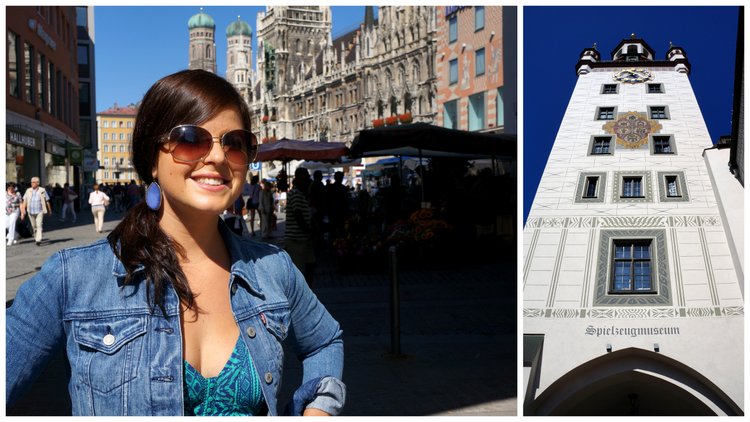 It was fascinating to see all of the beautiful architecture after coming from such an architecturally uninteresting city like Chiang Mai. We loved the flower beds that lined the windowsills, the incredible churches, cobblestone streets, fresh fruit stands and more. 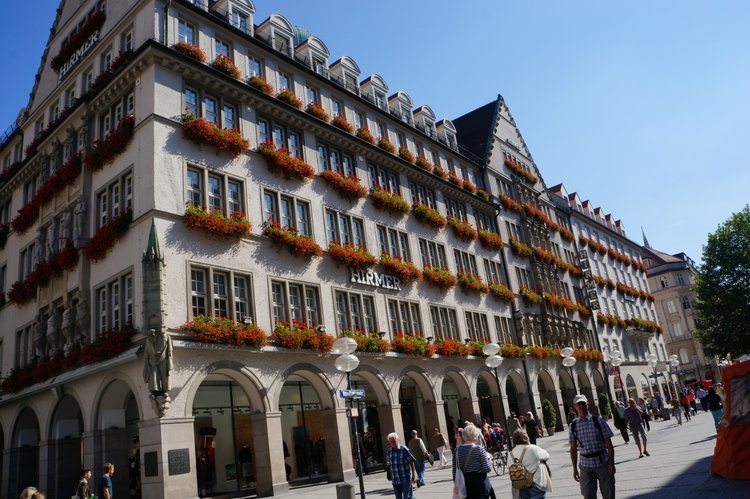 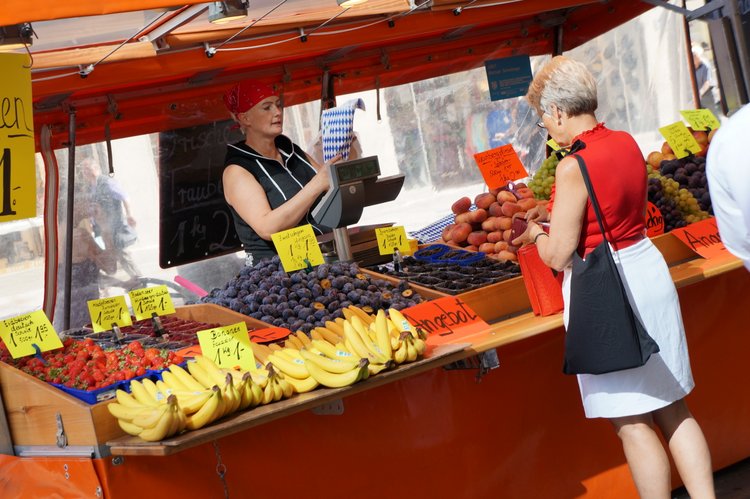 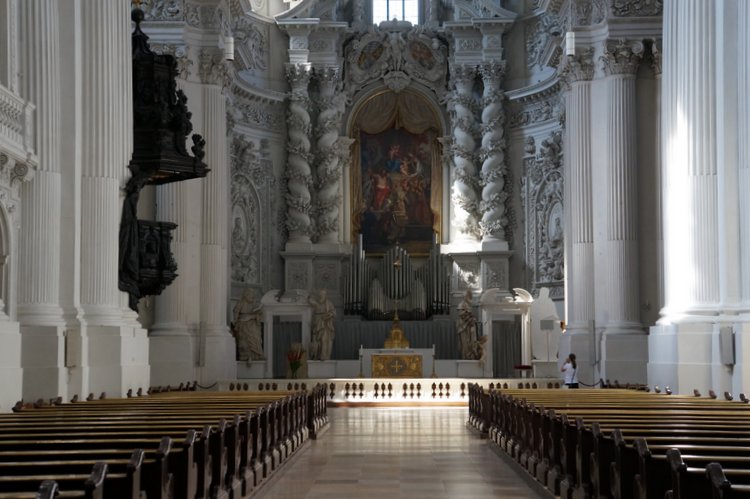 For those of you who don’t know, Marienplatz is also home to the world famous Glockenspiel. For some reason, we never actually got the chance to see the Glockenspiel do it’s thing as we always seemed to be in the area at the wrong times and didn’t really want to hang around to see it. 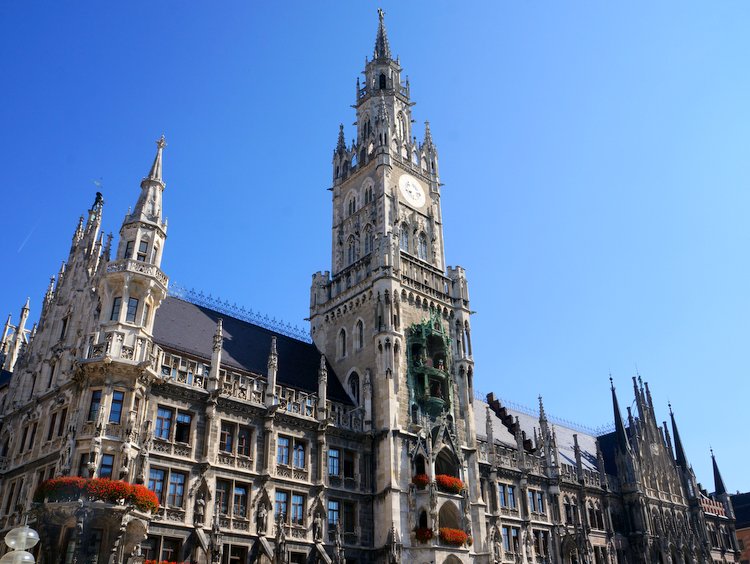 After exploring a little bit of the Marienplatz area, we took a brief stroll through the Hofgarten and crossed over to the Englischer Gartens which are famous for the Eisbach, or the river where you can find surfers catching a wave each and everyday. 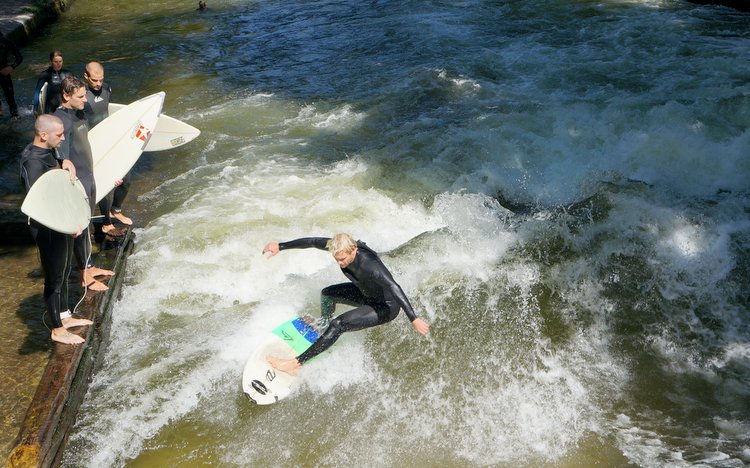 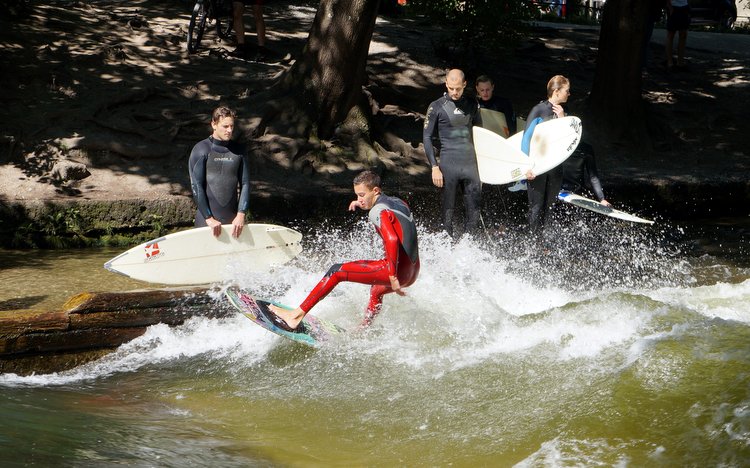 Being able to watch the surfers shred a wave in the middle of the city was pretty interesting to say the least. We spent about twenty minutes or so snapping photos before strolling around the rest of the gardens. 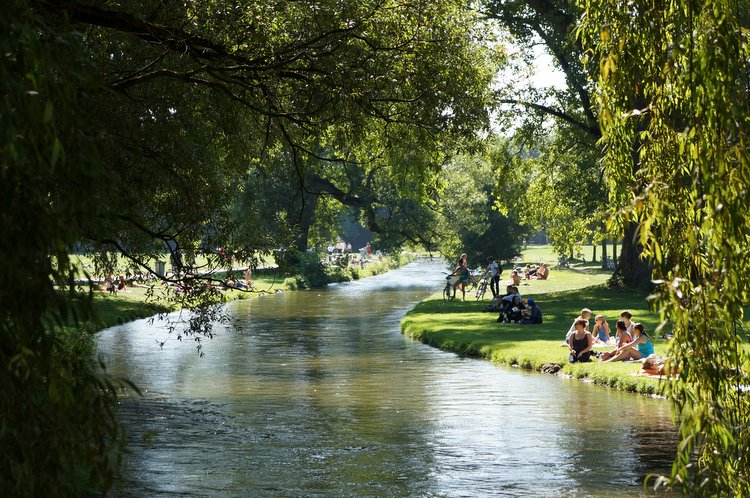 We made our way down river to a giant, wide open spot where many Germans spend their summers basking in the sun. It was here that we were met by more nudists than we had ever expected to see. Unfortunately, all of them were at least 60 years old, if not older. Why is it that it’s always the older folks that have no issues frolicking around in the nude letting it all hang out? 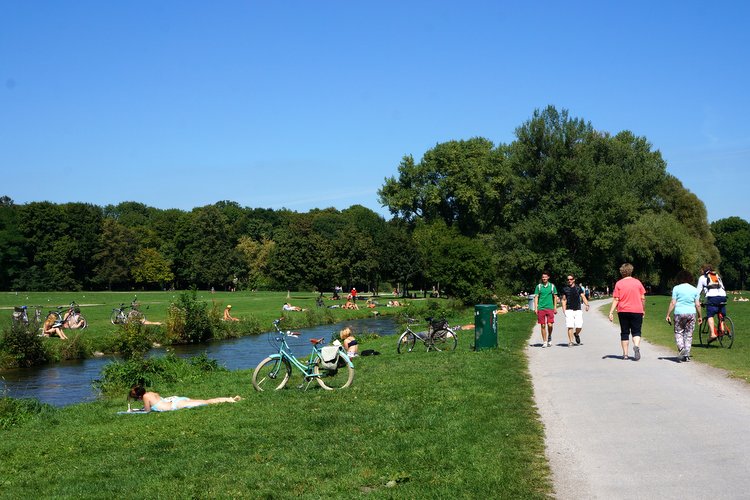 Other than the older nudist crowd, there were people of all ages hanging down by the river enjoying the summer sun, having picnics, floating in the water with friends and more. Unfortunately, we didn’t come prepared with our bathingsuits so we decided that we would come back the following morning.

After a long day of walking we made our way over to a small street cafe near to our hostel to have some lunch.

That night we decided we would take the traditional route while in Munich, and headed out for an evening at a local beer hall by the name of Augustiner Brau Stuben. Once we arrived we realized we we’re in for quite the treat. We sat down, ordered a half liter beer to share and went on to order porkschnitzel and meatballs with potatoes. 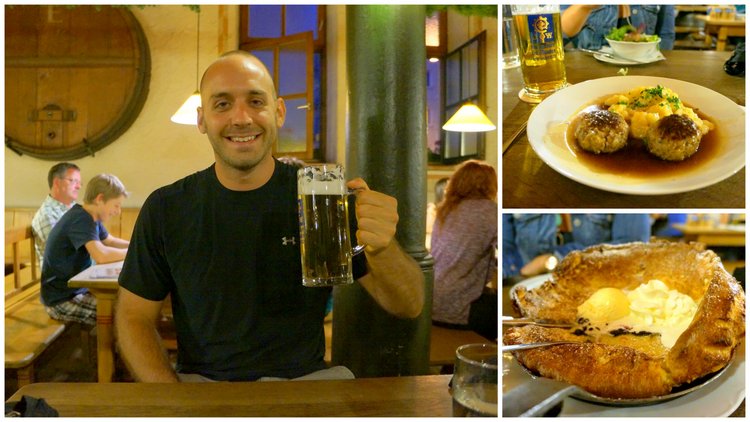 We finished off our tasty meal with a blueberry pancake like none other. Looking back on it, we totally could have done without the pancake. If we hadn’t seen one of our tablemates chowing down on one, we would have never even known about it. Needless to say, we left there with overly bloated bellies.

A Day at the Englischer Gartens 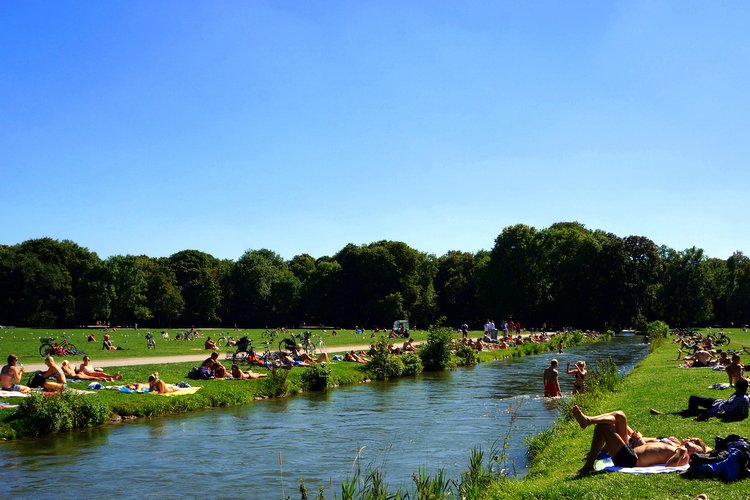 After getting a glimpse of the summer fun going on down at the Englischer Gartens, we decided to pack a light bag and head on out to the park to catch some rays. 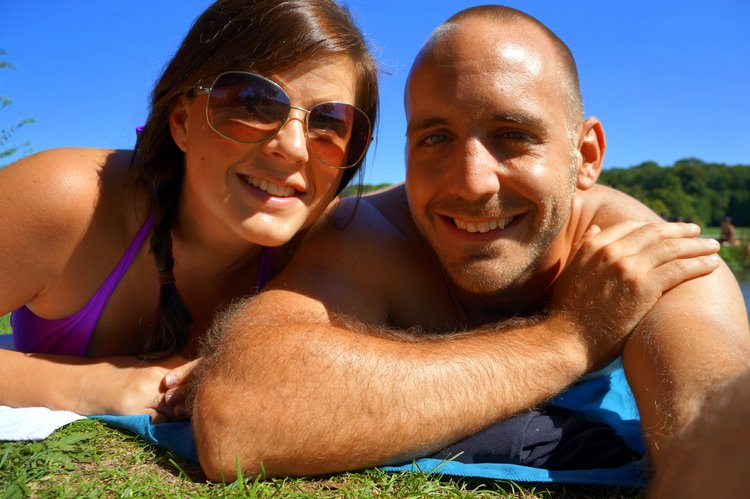 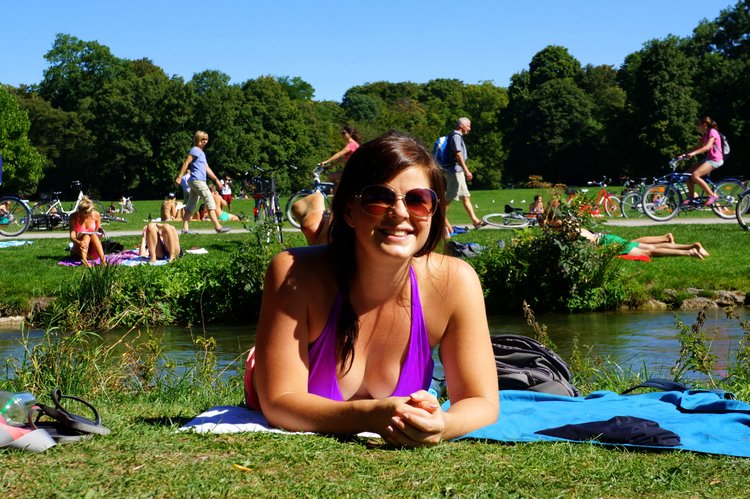 We found ourselves a great little spot by the river bank, laid out our towels, stripped until we were completely nude and baked in the sun for a few hours. Kidding! We didn’t go nude, I’m way too afraid of getting a sunburn on things that one cannot imagine getting a sunburn on, if you know what I mean. 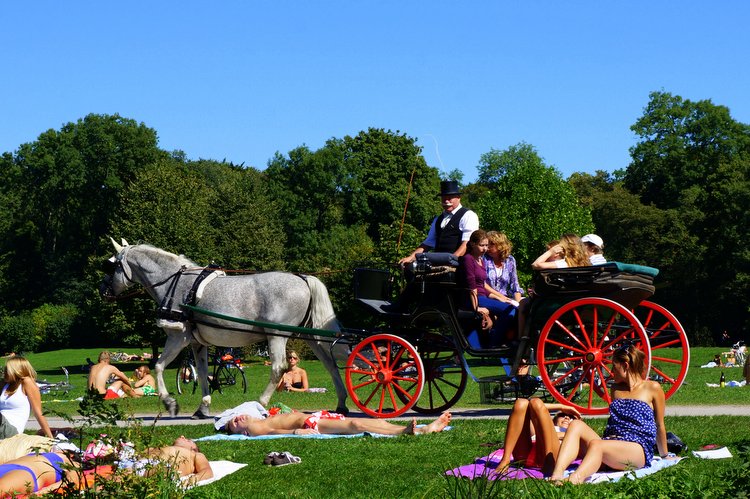 After a few hours of chatting and some serious people watching, we packed up our stuff and headed back to the hostel for a few hours before dinner. We attempted to get some things done on the Internet at the hostel, but the Wi-Fi was pretty much non-existent leaving us frustrated that we couldn’t get online and do the things we needed to do.

Our last night in Munich wasn’t too eventful. Liz stopped into a cafe to grab a salad and I picked up a giant slice of pizza across the road from our hostel before calling it a night.

Next up: Our First Day in Istanbul!