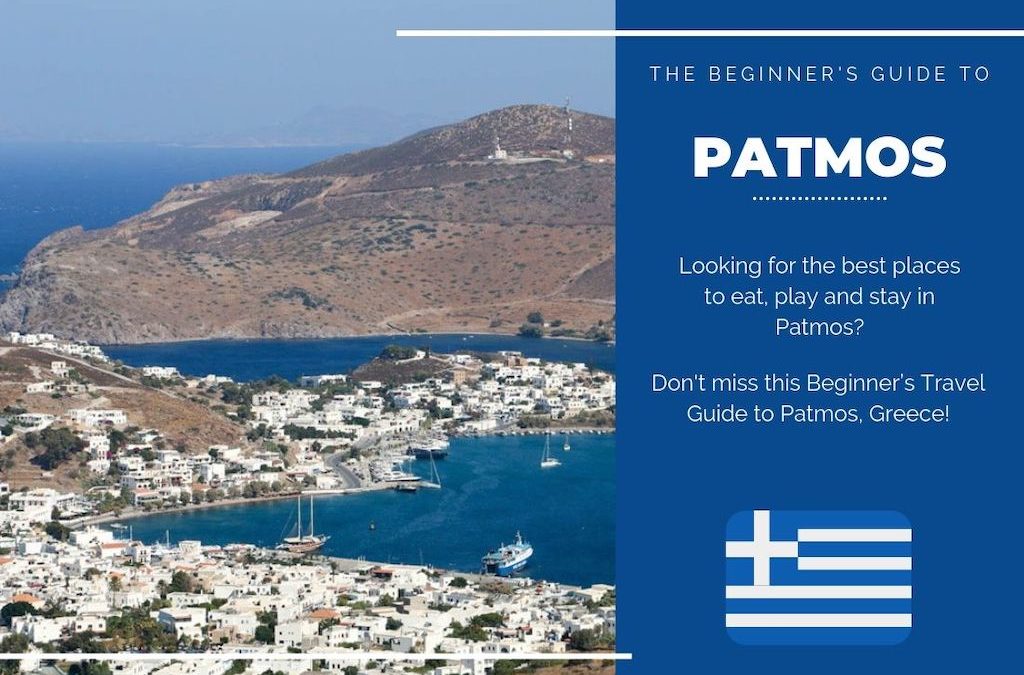 Patmos, Greece is one of the many stunning, lesser known Greek islands located in the east.

While there are a lot of interesting facts about the Isle of Patmos, one of the most important pieces of history which attracts visitors to the island is that Patmos is said to where St. John prophesied about the end of the world.

As a matter of fact, it is said that after being exiled John went to Patmos island, particularly to Patmos Cave (Cave of the Apocalypse), to write down his premonitions about the apocalypse.

Today, John of Patmos is one of the main reasons why people travel from all over the world to visit the isle of Patmos.

If you’re interested in visiting Patmos, whether for religious reasons or just for a relaxing vacation, you might be wondering where the island of Patmos is.

Well, this small but beautiful Greek island is in the Aegean Sea, off the coast of Turkey and it’s part of the group of islands known as the Dodecanese.

Below, you’ll learn more about the best things to see, do and experience in Patmos.

Before You Go: Travel Insurance

When planning a trip to Greece and the Greek Islands your first priority should be to make sure you make a small investment towards your health and well being by considering an affordable travel insurance policy for your trip.

Not only will this budget friendly travel insurance policy cover you if your bags are lost/stolen and if your flight is delayed/cancelled, but you’ll also be covered for all medical and injury related issues as well.

Let’s face it. No parents, family or friends want to have to cover the cost of you getting medevaced home from Greece.

Especially when you least expect it.

Do yourself a favor and consider purchasing travel insurance coverage for your trip so you can rest assured that you’ll be taken care of in the event of a serious emergency in Greece.

P.S. You won’t believe how reasonably priced this travel insurance is.

How to Get to Patmos

Unfortunately, there are no airports on the island of Patmos, so you need to travel to Patmos by boat from other nearby islands in Greece or from Turkey.

When it comes to booking Greek ferries to Patmos, one of the most reliable and reasonably priced Greek ferry search engines is powered by a company called Ferries in Greece (highly recommended), a major greek ferry booking hub that helps more than 35,000 passengers get to and from the Greek islands each year.

As mentioned earlier, the Patmos airport doesn’t exist, but there are airports located on nearby islands which you can fly into from other parts of the world.

Here is a short list of destinations which have ferry services to Patmos:

Tip: Begin your flight search by using the Skyscanner engine embedded below.

Where to Stay in Patmos

When it comes to accommodations, there are two main options that you can choose from — Airbnb (recommended) and hotels.

Airbnb is Patmos has a wide variety of accommodations to choose from — from Patmos villas, studios, apartments and so much more.

Overall, Airbnb will give you the best value for your money, significantly more privacy than a hotel, and an opportunity to really feel what it’s like to live like a local.

🔎 If this is your first time using Airbnb, we recommend you read our Insider’s Guide to Saving Money on Airbnb Apartments.

If service and amenities are your top priority when it comes to planning your trip to Patmos, we recommend you book your stay in a hotel on the island.

You can find the best hotels in Patmos in the areas of Skala and Grikos.

Below, you’ll find a short list of recommended hotels in Patmos.

Things to Do in Patmos

As mentioned above, Patmos is an island of great historical and religious significance in Greece.

Catholic devouts visit Patmos for its pilgrimage sites and its connection to St. John who wrote the book of Revelations in the Bible.

Below, you’ll find a short list of things to do in Patmos, Greece.

Note: If you’re not visiting the island of Patmos for religious reasons, you’ll be glad to hear that there are a variety of things you can see and do on the island which do not involve religious history.

Aside from monasteries and chapels, it is also rich in natural beauty that is truly a joy to explore and discover.

Monastery of St. John the Theologian

The Monastery of St John the Theologian is a fortified monastery in Patmos which was founded more than 900 years ago by Ossios Christodoulos to honor the prophet John.

The monastery was declared a UNESCO World Heritage Site in 1999.

The oldest parts of the monastery include the Chapel of Panagia, the main church (or the Katholikón), and the refectory.

Today, the Monastery of St. John is home to a curation of manuscripts, icons, and liturgical artwork and objects that are of great Christian significance.

The Patmos Cave or Cave of Apocalypse

The Patmos Cave, also known as the Cave of Apocalypse or the Cave of Revelations, is part of the Apocalypse Complex on the island of Patmos, which includes the Monastery of St. John the Theologian and the old settlement of Chóra.

It is located on a hill between Skala and Chóra, and it is believed to be the site where John prophesied the apocalypse.

Now a place of worship, you can visit the site where John saw and wrote the Revelations and see the lectern of Prochoros.

Chóra is a medieval settlement in Patmos, Greece which is part of the UNESCO World Heritage Site.

Here, you can still find well-preserved religious and secular buildings from as early as the 12th century.

Churches in the area are still practicing traditions from the early years of Christianity, practically unchanged even through the centuries.

The Agia Levia Square is a busy square in Chóra where you can find shops and cafés.

From here, you will have a great view of the sea and the harbor.

If you want to spend a few hours shopping, eating, drinking coffee, or simply relaxing in between sightseeing, head to Agia Levia Square.

Visit the Beaches of Patmos

Tour companies in Patmos offer boat tours which take you out on a day-trip to some of the many beautiful beaches on the island.

Below, you’ll find a list of gorgeous beaches in Patmos that we recommend you visit during your trip:

There are a variety of hiking trails in Patmos that you use to explore the island more in depth.

Below, you’ll find a list of hiking trails in Patmos:

The Arki Island Complex and the northern Patmos islets are a popular destination for scuba divers.

Comprised of 14 islands and small islets, these are protected areas and part of the Wildlife Refuge in Greece, so marine life is thriving and will make for a unique experience if you go scuba diving.

Try the Cheese, Wine and Gastronomy in Patmos

When in Patmos, you must try the local cuisine.

Below, you’ll find a short list of the best restaurants on the island, along with their signature dishes.

Visit the Holy Baptistry and the Wizard Kinopas

When John was exiled to Patmos by Domitian, he began to spread the Word of God to the people in the island and to baptize them into the Christian Church.

When Wizard Kinopas found out what he was doing, he challenged John to bring a man back to life, but the disciple refused to do so.

You can visit the site of this confrontation in the town of Pernera.

Visit the Skala Port of Patmos

Skala Port is a busy marina in Patmos with panoramic views of the Aegean Sea.

This is the port that you’ll likely arrive in when you land on Patmos as it’s the port where most ferries, yachts, and cruise ships dock when they stop into the island.

Two of the windmills that can be found in Patmos were built in the late 16th century, while the third one was added in the late 19th century.

However, the farmers on the island stopped using them in the mid-20th century, causing the windmills to deteriorate over the years.

The good news is that the windmills were restored in 2010 and you can now see them in operation while you’re in Patmos.

The Nikolaidi Mansion was built in the 18th century, which makes it a good representation of traditional Patmos architecture.

It has also been turned into a museum where you will find relics from prehistoric times to the Hellenistic Era.

Wine and Dine in Skala

Skala began to thrive when it became an important commercial port during the 16th century.

It continues to be a popular spot on the island, especially as a food hub.

Here are some of the best wine and dine spots in Skala:

Diakofti is a sandy beach in Patmos where the water is shallow and the views are spectacular.

Tourists love to visit Diakofti Beach because it reminds them of exotic beaches in other parts of the world.

Agrio Livadi is a quiet and laidback beach in Patmos.

If you want to avoid the crowd of tourists that usually head to the island during peak season, this beach will be the serene getaway that you will always remember.

It is also known as a favorite beach destination for upscale tourists on the island.

There are taxis on the island and a bus service that runs between Skala and Kampos, but the best way to get around Patmos is by car or by scooter.

Renting a car is a more convenient way to get around the island, especially if you wish to explore more of it and don’t want to plan your itinerary around the bus schedule.

There are rental car services in Patmos and the cost is approximately €30/day.

If you’re comfortable riding scooters, this is the quickest way to move around the island of Patmos.

Scooter rentals will set you back approximately €15 to €20/day.

When is the Best Time to Visit Patmos?

Now that you know where to stay in Patmos, what sights to see, activities to do, and how to get around the island, let’s talk about when to visit Patmos.

Patmos weather is mostly sunny with a little bit of humidity throughout the year.

Meanwhile, the peak season in Patmos is between May to early August.

If you want to avoid the crowds, the best time to visit Patmos is from March to early May or from late August through the end of September.

Well, that just about wraps up this in-depth travel guide to the Greek island of Patmos — a gorgeous island with a lots of historical and religious significance.

Don’t forget to pair your visit to Patmos with other nearby islands such as Samos, Leros, Lipsi, Kalymnos and Kos.

You might also enjoy this beautiful video of Patmos below: