16 of the Best Things to Do in Isla Holbox 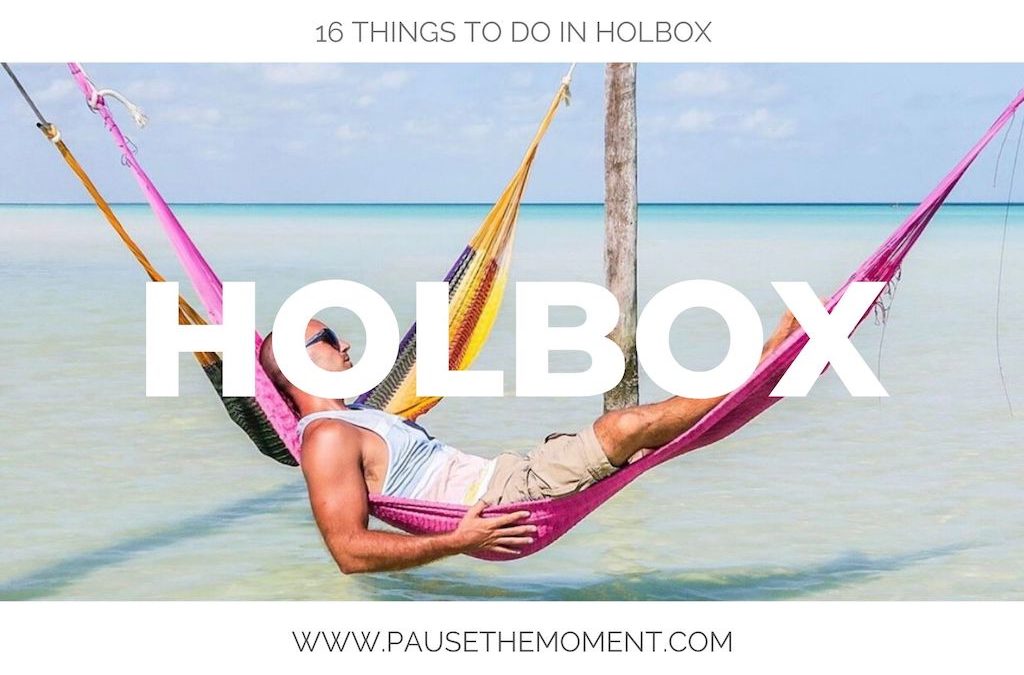 Isla Holbox is a small island located off the northern coast of the Yucatan Peninsula.

You can reach Isla Holbox by taking a bus (ADO) or private transfer from Cancun, Playa del Carmen and Tulum to a coastal town known as Chiquila.

The ferry from Chiquila to Isla Holbox takes approximately 25 mins.

Up until a few years ago, the majority of the island’s income came from fishing.

Over the course of the last five years or so, Isla Holbox has become more and more popular and is now a much more well known travel destination in Mexico.

These days, there is a lot of money being dumped into the island in order to develop the land, protect it and make it more sustainable for the hoards of visitors that visit this beautiful little slice of paradise each year.

Things to Do in Isla Holbox

Isla Holbox is primarily known for its gorgeous white sand beaches and crystal clear water, but the island also home to a wide variety of wildlife including flamingos and an abundant number of other species of birds.

If that wasn’t enough, Isla Holbox also offers day tours which take you out to sea and allow you to experience snorkeling with the largest fish in the world — whale sharks.

Looking for more things to do in Isla Holbox?

Below, you’ll find 16 of the top things to do in Holbox:

Get your camera ready because it’s not every day that you get to witness flamingos basking in the Caribbean sun.

Flamingos can be spotted in Holbox between the months of April and October although locals claim that they hang around the island year round.

The best time to visit Isla Holbox when it comes to spotting Flamingos in the wild would be between May to October because during these months, it’s said that more than 40,000 flamingos visit the island.

Have you ever dreamed of swimming with whale sharks?

Well, you’re in luck because Isla Holbox offers day trips which take you out to sea and allow you to swim with these gentle giants in the wild.

If you’re interested in swimming with the whale sharks in Isla Holbox, the best time to visit would be between May 15th and September 15th.

During this period of time, the whale sharks arrive in large groups to feed on plankton located off the coast of the island.

Isla Holbox offers a 2 to 3 hour long tour known as the 3 Island Tour — During this tour, you’ll be taken to Isla Pajaros, Yalahau Lagoon and Isla Pasion.

You’ll get to see a variety of birds, fish and crocodiles, if you’re lucky.

The tour takes you to the following islands:

Located between the Caribbean Sea and the Gulf of Mexico, the waters of Holbox are warm and diverse when it comes to marine life.

If you’re interested in scuba diving in Holbox, there are a couple dive shops on the island that will be able to assist you.

Looking to try something adventurous during your vacation in Holbox?

Well, you’re in the right place because kiteboarding lessons are available in Isla Holbox.

Learn more about kiteboarding, kitesurfing and the differences between the two here.

There is a certain kind of serenity you can only find in the waters of Holbox.

Kayaking along the coastline and into the mangroves of Holbox is an experience not to be missed.

If you’re lucky, you might even spot some flamingos and other exotic birds along the way.

Rent a Bicycle and Explore the Island

The island has been dedicated to preserving itself, and as such, there are no paved streets there.

What you can do is rent a bicycle and tour the island.

This way, you would get to see the island in the most genuine way possible – you wouldn’t have to worry about traffic and fumes.

While biking around, you would see murals almost everywhere and you could pause to admire them.

There are a number of rentals in the island and some even offer tours.

Nature is an art. This proves to be true when you go to the southern part of the island on a moonless night – this is when you see the bioluminescence in the water.

The bioluminescent microorganisms in the water look like millions of stars, and is like seeing an entirely new galaxy in the waters.

The sight is simply breath-taking.

This usually happens between the months of July and January, so it’s best to book your trip within the scope of these months to make sure you do not miss this phenomenon.

It would not be a perfect beach vacation without that beautiful sunset scenery while having fresh fruit juices at the bar in front of the Zomay Hotel.

One of the best perks of being on this island is being away from the usual raucous of the modern world.

It is somewhere you can truly relax and just enjoy the sunset.

Aside from the beaches in Holbox looking like paintings, the center of the island is filled with tasteful street art.

Rent a bicycle or simply take a stroll down around town and you’ll be sure to stumble upon some of the many street art murals.

A marquesita is a scrumptious rolled-up crispy crepe filled with melted cheese filling.

The best place to find marquesitas is at one of the local marquesita carts stationed in the center square of Holbox.

Holbox is known for its iconic hammocks which hang over the picture perfect coastline of the island.

The easiest way to find the hammocks is to head east along the beach. You’ll find a variety of beautiful hammocks hanging above the shallow water to relax in.

Interestingly enough, these hammocks have become a trademark of the island so much so that it is said that you haven’t been to Holbox if you don’t have a photo of yourself kicking back in a hammock on the island.

Try the Wood-Fired Pizzas and Empanadas

After an adventure-filled day, it is always best to reward yourself with good food, like the delicious wood-fired pizzas and empanadas of El Hornito Argento.

El Hornito Argento can be found on the west side of the main square in Isla Holbox.

Playa Tortuga is located at the west end of Isla Holbox and is abundant with bioluminescent microorganisms which glow at night.

During the day, you can find a beautiful remote beach which doesn’t attract too many visitors as you need a bicycle or golf cart to get there from the center of town.

Away from the crowds, this is one of the more remote, white sand beaches on the island.

This beach is sanctuary to turtles that lay their eggs in the sand, so be aware that during certain months the beach is closed to ensure the safety of these wonderful creatures.

Enjoy an Afternoon at the Pier

Bid the day farewell by sitting along the Holbox pier and feel grateful for the beauty that surrounds you.

Many tourists and locals come to the pier in Holbox to see the sunset, so be advised that you will not be alone.

With fishing as the island’s primary source of livelihood, the locals have found a way to incorporate this with its blossoming tourism.

A captain will take you to spots ideal for fishing and teach you traditional techniques. Whatever you catch is yours to keep, if you choose.

If you plan on taking your fish home, be sure to ask the captain for local restaurants which will cook and prepare your freshly caught fish for you.

With technology and development in this modern age, it is hard to find places that remain true to its beauty, the way nature made it.

Holbox is an experience that will leave you with memories that will make you appreciate nature, art, and the simplicity of life.

🗣️ Did you find this article useful? If so, please comment below and be sure to share it with your family and friends.