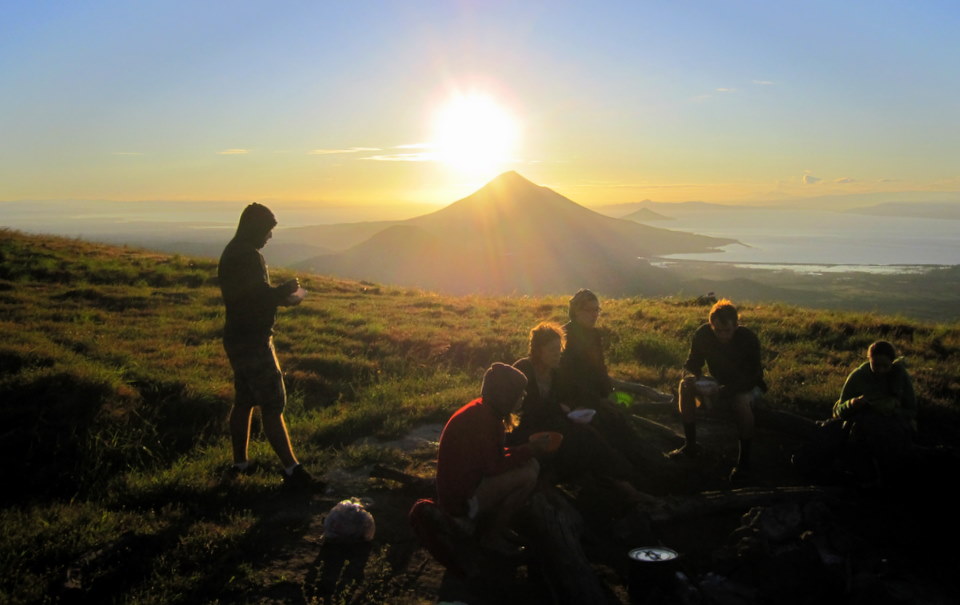 Did you miss: Quetzaltrekkers Part I: Volcano Boarding Down Cerro Negro? If so, be sure to check it out!

After we cruised down the side of Cerro Negro on makeshift toboggans, we made our way back to the ranger station for a short break. While there, we indulged in some trail mix and other light snacks before gearing up for our 2 day trek to El Hoyo. Before leaving the ranger station we were instructed to use the bathrooms as it would our last chance to use actual plumbing for the next day and a half. 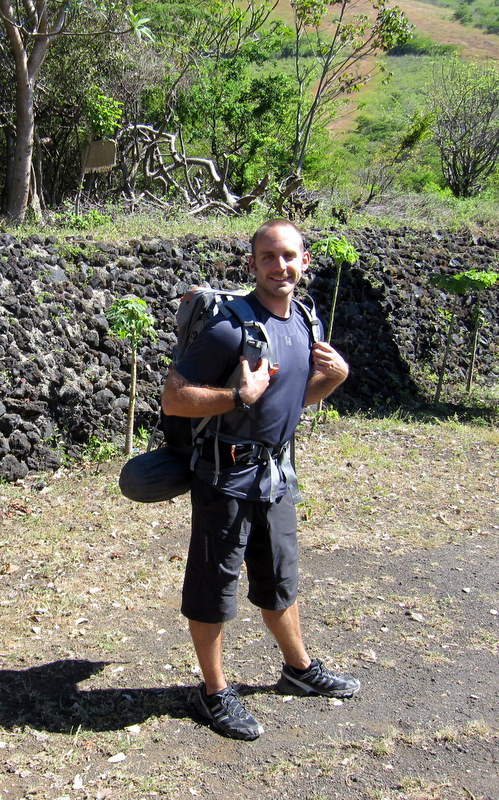 Getting ready to hike El Hoyo!

Once we threw on our 20-liter packs, we headed for the closest trail that would lead us in the direction of big bad El Hoyo. The guides warned us that the first hour or hour and a half of this trek would be the toughest part of the entire trip. They were one-hundred percent accurate. 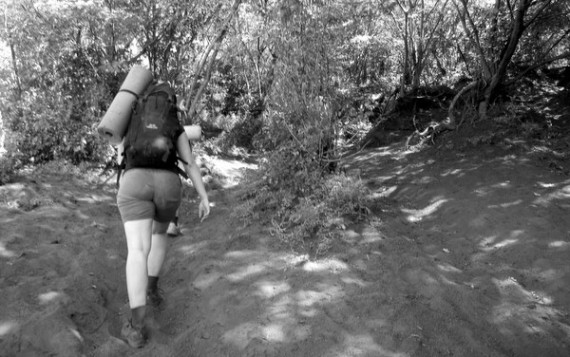 The initial steep climb had us all breathing heavy and sweating profusely. I knew ahead of time that this would be quite a challenging hike but I also knew that the rewarding views would pay off later in the evening. Myself, Nina and Shelby followed closely behind our lead guide Langdon while the rest of the crew (Lina, Billy, Daniel, Janette, and Brennan) followed at a slightly slower and probably smarter pace behind us. 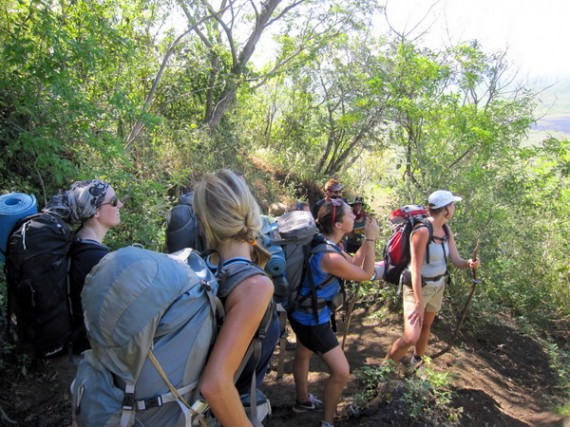 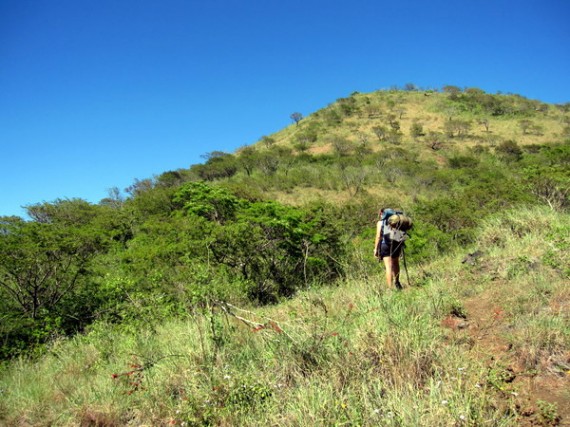 Shelby, taking in the views after reaching our first real break point 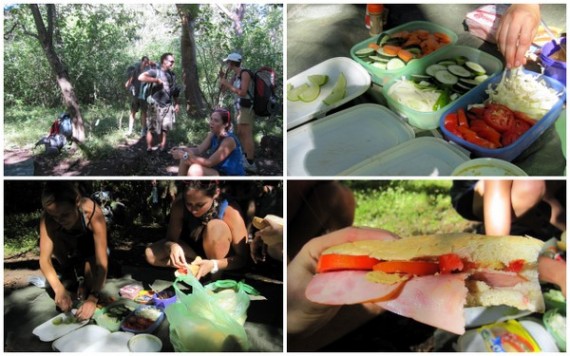 After lunch we continued our trek to the top of El Hoyo. Along the way we experienced a lot of brush. The hike was fairly flat for the most part until we started to head up the actual side of El Hoyo and where we would end up setting up our camp for the night. On the way up we stopped to grab some firewood for the night. We all did some kindling hunting and secured it all to our bags before moving on to our final destination. 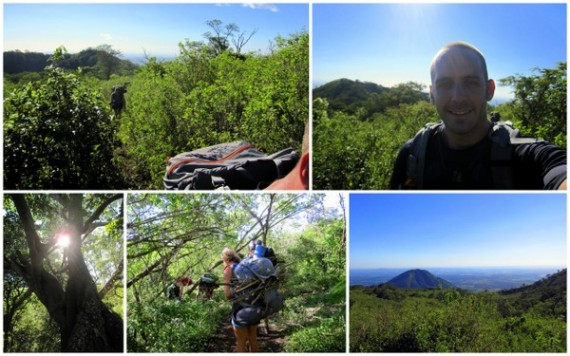 Trekking through the brush and picking up firewood for the night...

On our way up to our camp spot we experienced quite a bit of loose volcanic rock along the way. We all had our fair share of stumbles on the way up. You really needed to watch your footing at this point of the trek. 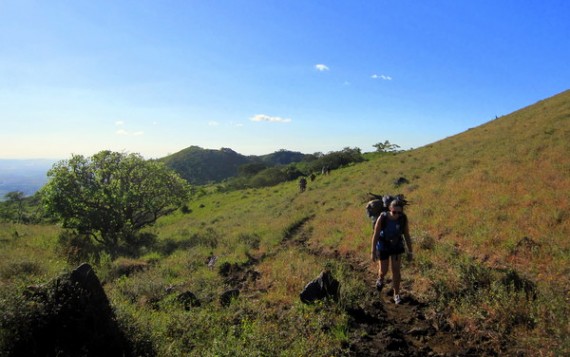 The final stretch to our camp spot

Once we reached the top of the ridge we could finally see where we would be camping for the night. We were all so excited to be just about finished with our first day of hiking El Hoyo. 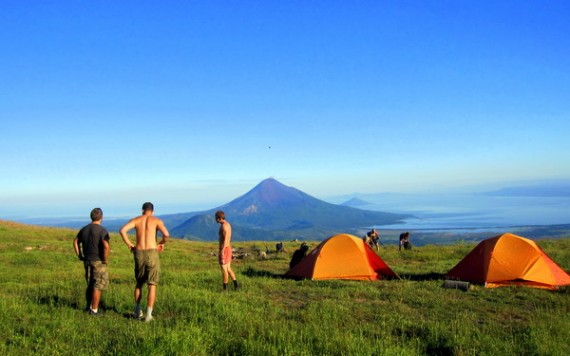 Setting up camp on top of El Hoyo 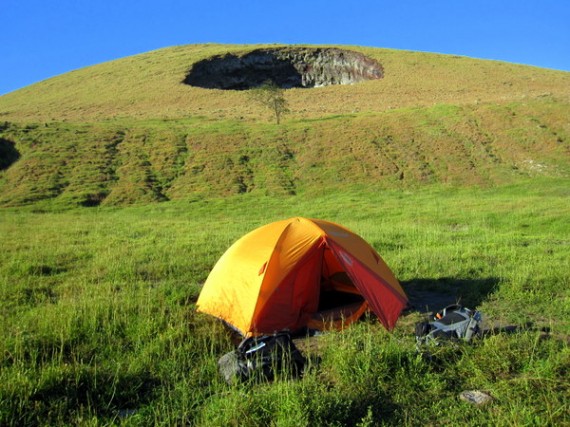 My tent with El Hoyo's mysterious sinkhole in background

Upon arriving we dropped our firewood, setup our tents in record time, organize our gear, and got settled in.

Before heading further up El Hoyo we played around with some jump photos. I mean, how many times would you say you’ll be able to snap a photo of a group of you and your friends jumping for joy atop a volcano? Exactly. 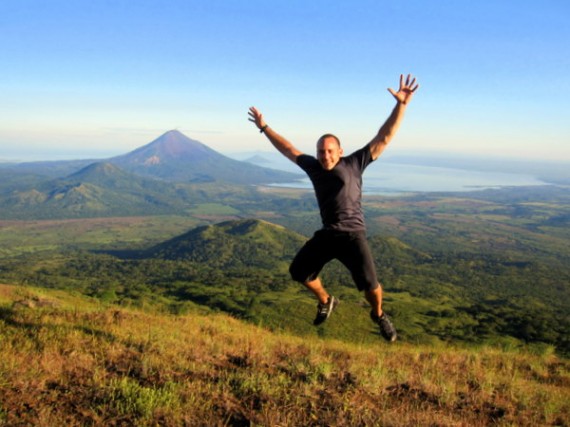 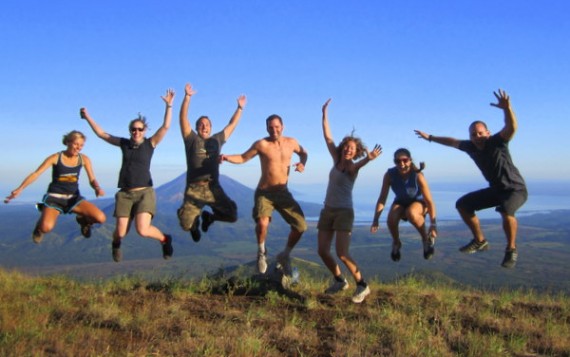 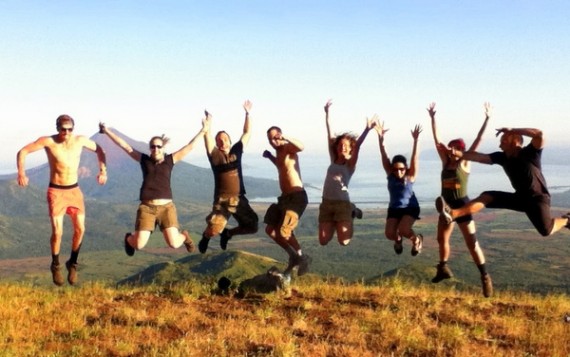 After jumping for joy,it was now time to hike to the top (without our gear) of the volcano in order to check out the mysterious sinkhole, see the fumerol and most importantly, catch the sunset!

How outrageous is this view from the sinkhole looking down on to our camping spot with the crater lake in the distance? 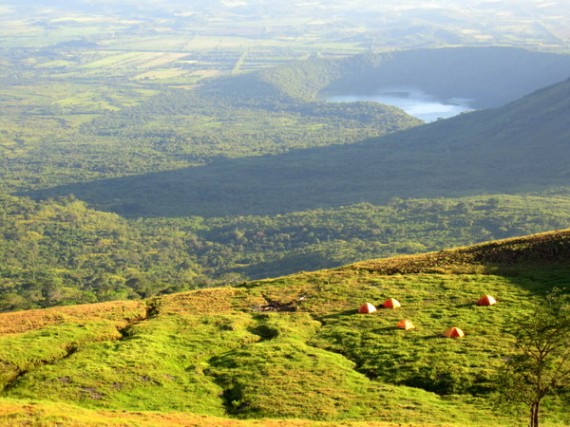 From the sinkhole we made our way to the nearby fumerol and from there to our final sunset viewing spot atop El Hoyo. Here’s a collage which shows the sun shining through the fumerol, the chain of volcanoes, a piece of volcanic rock, and the sunset in the distance. 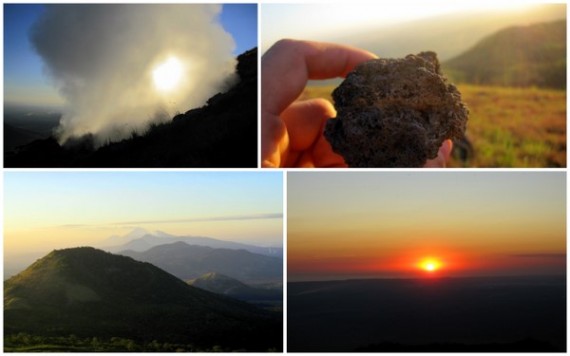 After sunset we made our way back to camp and had dinner (pasta with red sauce and tuna) over the open fire. Later on we introduced our German and Swiss friends Lina and Nina to S’mores! 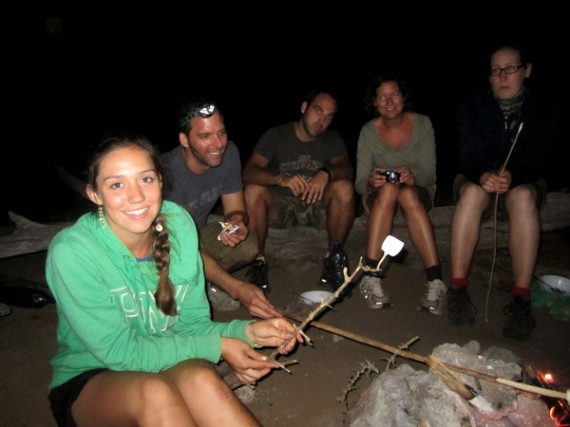 We all chatted around the fire for a while after dinner until we all retired to our tents one by one. Throughout the night we were woken up by the howling winds rattling our tents. I hardly slept at all to be honest. 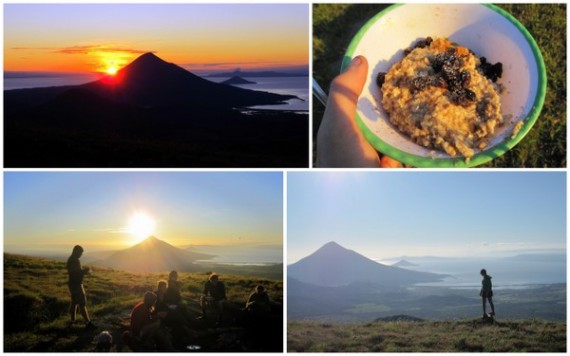 At 5:15 am our guides came around tent to tent to let us know the sun was just about to rise over Mombotombo and Mombotombito in the distance. We chowed down on a really solid and yummy breakfast of oatmeal, granola and raisins. It was a perfect start to our day and our descent down El Hoyo to the crater lake. 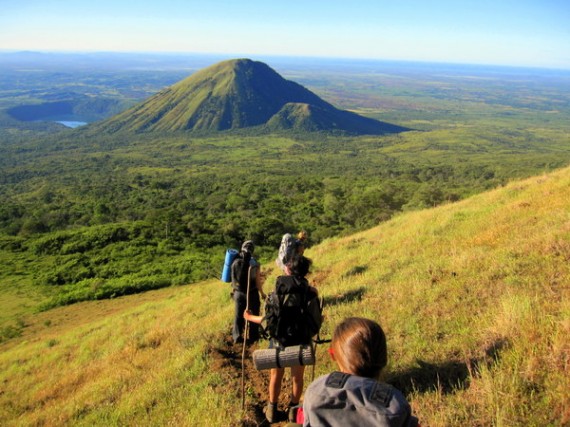 Getting down El Hoyo wasn’t half as hard as coming up. I originally thought it might be somewhat difficult but other than the first part of the descent which was full of loose volcanic rock, it was pretty simple.

We hiked for about 3.5 hours until we reached the crater lake. Once we arrived we all changed into our bathing suits and jumped straight into the lake without hesitation. It felt so good to remove all of the grime from our bodies as we swam around. While swimming, we chatted about El Hoyo in the distance and how far we had hiked by the time we got to the crater lake. 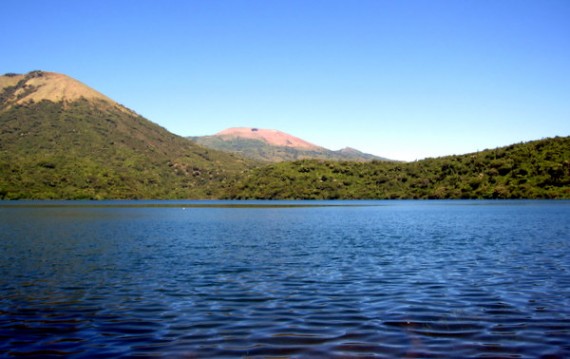 View of El Hoyo from the crater lake 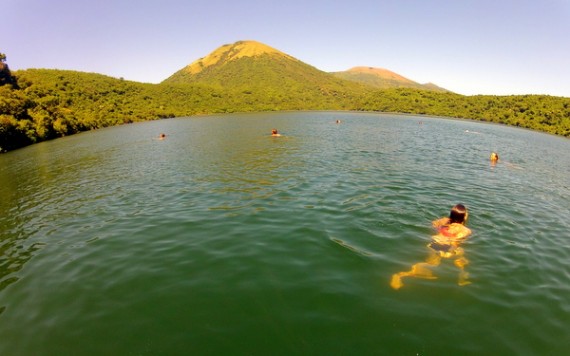 Swimming in the crater lake

Overall, the trek to El Hoyo with Quetzaltrekkers went as smooth as possible. I highly recommend you try a volcano trek with them if you ever happen to find yourself in Leon, Nicaragua. If I was to tell you what my most interesting adventures were while traveling Nicaragua it would be trekking El Hoyo, and attending my first ever Nicaraguan baseball game.