RING! — The alarm of my iPod is ringing in my ear telling me that it’s time to wake up.

It’s 7:30AM on the dot and I know that if I want to hike Angels Landing, I need to be at the base bright and early to ensure I don’t run into any pedestrian traffic on the trail.

I quickly roll out of bed with a smile on my face. Why? Well, because today I’m going to be hiking Angels Landing, one of Zion National Park’s toughest trails. Supposedly this hike is quite the challenge and as you know, I’m all about crushing any challenge that comes my way. 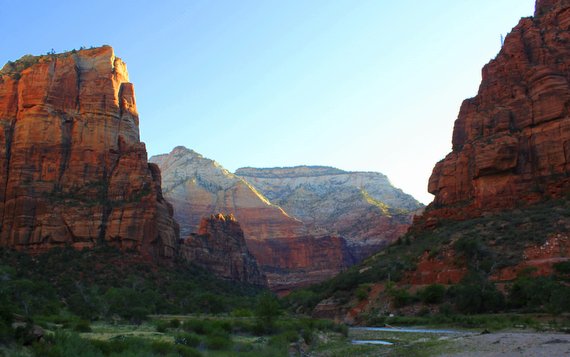 Angels Landing is the tall cliff face shown on the left hand side of this photo.

Today my mission is to see how fast I can ascend Angels Landing. While it’s probably not the brightest idea to scurry on up to the top of this beast, it’s something I’ve set my mind to at this point so I’m going through with it.

Note: I’ve done a little bit of research and it seems to me that the average hiker completes this hike in approximately 90 minutes (one-way). 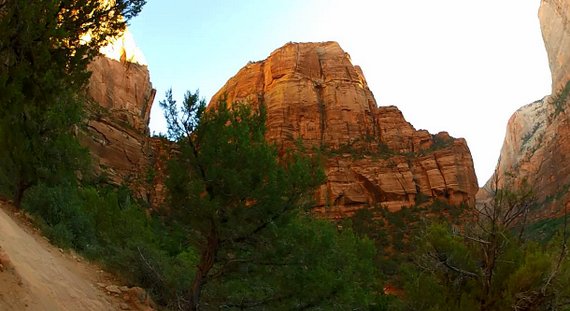 As soon as the park shuttle dropped me off at the Grotto Picnic Area, I made a beeline for the initial trail head that would lead me up past Scout Lookout and on towards the Angels Landing Trail.

The first half mile of the trail runs along the Virgin River while slowly gaining elevation. Once it starts getting steeper, the trail turns into a mixture of pavement and solid rock terrain. 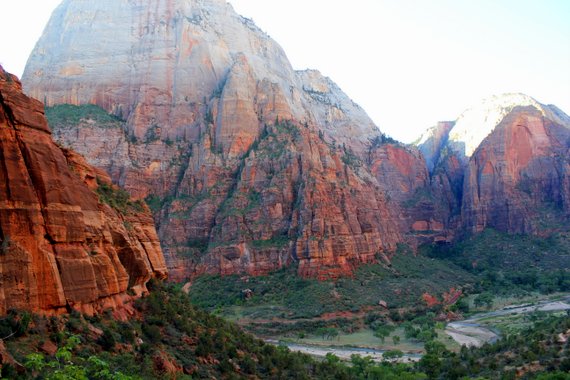 Although I was on a mission to conquer this hike, I made a few photo pit stops along the way, and rightfully so. 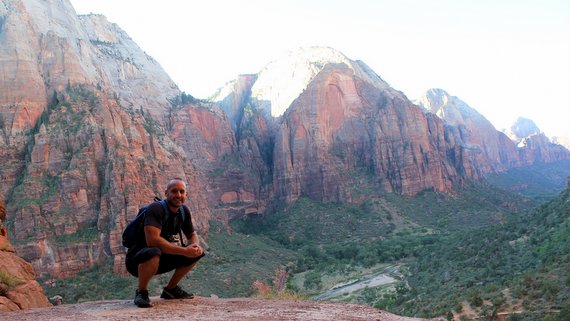 After this point, the hike started to get pretty tough. Cardio wise at least. Although I think of myself to be pretty fit, I was huffing and puffing due to the steep incline of the trail.

Take a look at how the trail has changed from dirt to a paved, maintained trail. 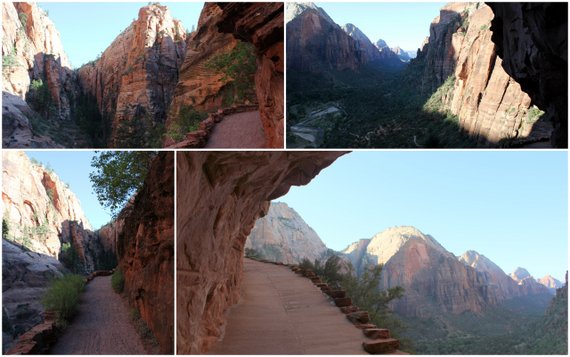 The photos above show how the trail actually winds its way around the edge of the cliff face.

After a series of steep switchbacks (21 to be exact), I arrived at Scout Point. Scout Point is known as the “turnaround” for most people as they take one good look at the last half mile to get to the top of Angels Landing, and they say “Screw this, I’ve had enough!”

Stop here? Not today my friends!

I’m on a mission and I knew I was making a great pace. My gut was telling me that I could conquer Angels Landing from start to finish in less than an hour. Will I make it?

Below, you’ll see one of the many reasons why people call it quits at Scout Point. 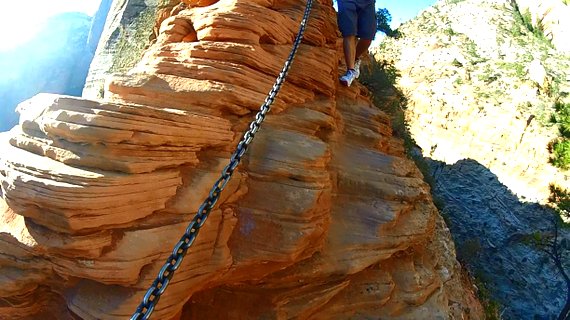 FACT: Since 2004, six people have died falling from the cliffs of this route.

With a 1,000 ft drop on either side, the “courtesy chain” dangling on the left and the slippery sandstone only makes this part of the hike that much more horrifying.

Note: I have no real problem with heights or situations of this nature. DO YOU? Leave a comment below! 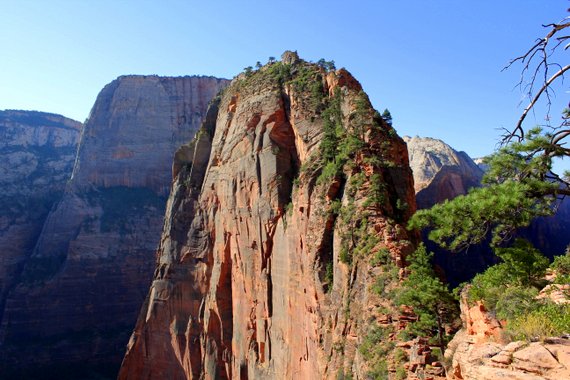 There she is! All I need to do is climb up and over and I will have conquered Angels Landing!

I continued my way over the big hump shown above at a speedy pace. The hike was becoming a lot more technical at this point. There were large step ups and sometimes use of the chain was necessary just to get yourself to the next gigantic boulder.

Take a look at these views though. 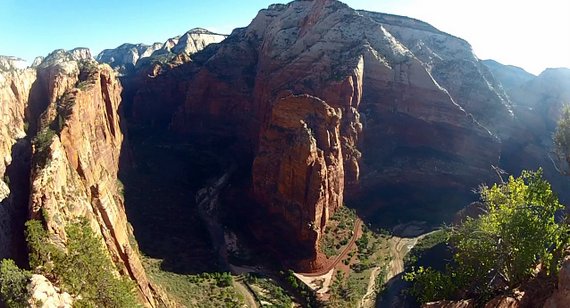 If you look closely, you can see the road below.

Just a few more big, carefully placed steps and I had officially arrived at Angels Landing with my life still intact. 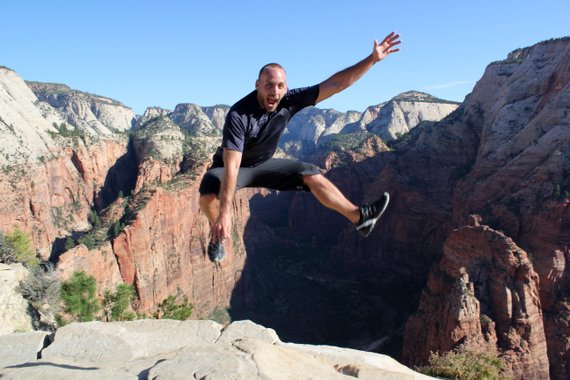 It’s only logical to Pause The Moment on top of Angels Landing!

After snapping the photo shown above, I took one quick look at my clock and realized I had achieved my goal of hiking Angels Landing from start to finish in under an hour! 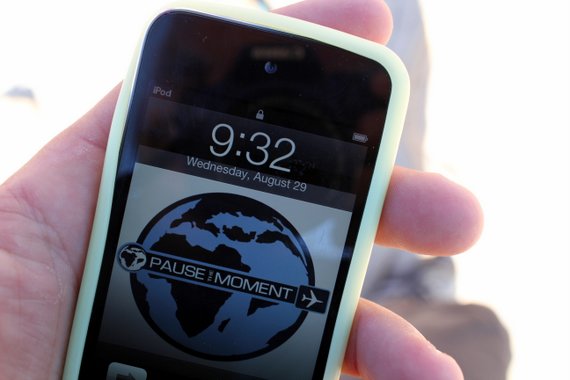 It took me exactly 57 Mins to Hike Angels Landing! 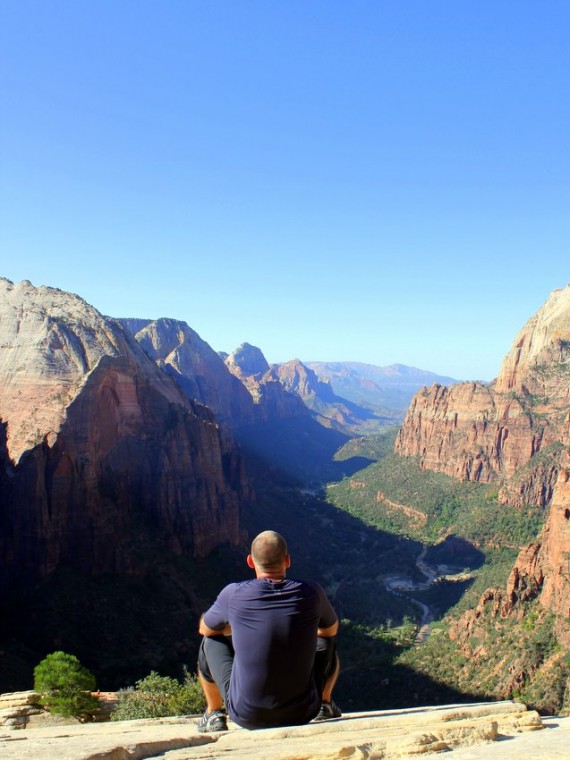 Time to take in the scenery of Zion National Park from atop Angels Landing! 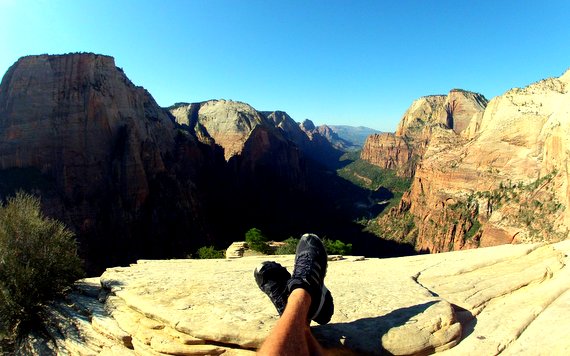 This is what I call relaxation…

After one hell of a climb and a workout all I wanted to do was relax and take in the views. So that’s exactly what I did. I kicked back and enjoyed every minute of my time atop Angels Landing.

DON’T MISS: Zion National Park: 14 Stunning Photos That You Have To See!

Have you ever visited Zion National Park? If so, have you hiked Angels Landing? I would love to hear your thoughts!