48 Hours in Cairo: The Perfect Two Day Itinerary for Cairo 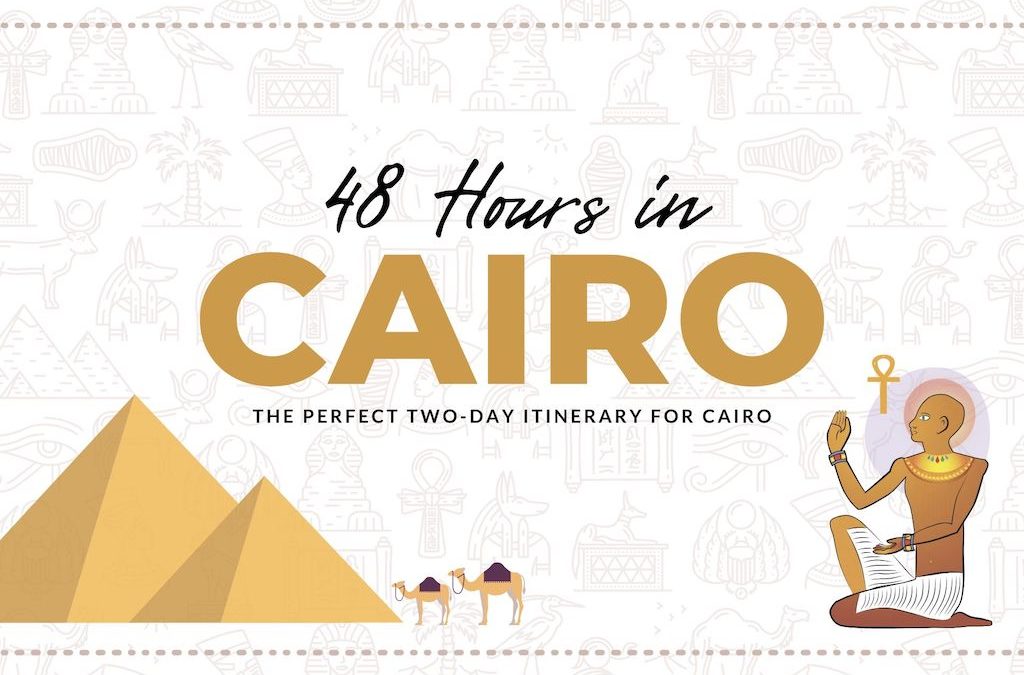 Whether you’re planning a trip to Cairo or you’re just on a short stopover on your way to visit other destinations within Egypt, you should make the most of your time by visiting some of the most popular attractions in the city.

As with other famous destinations in Egypt, Cairo is visited by millions of tourists each year and many of these tourists are there to experience the ancient landmarks still present in the city such as the magnificent Pyramids of Giza, the Sphinx, Saqqara, and many more.

Your first 24 hours in Cairo will include the Pyramids of Giza, the ancient step pyramid of Saqqara and the Egyptian Museum.

Your first stop of the day should be to the Pyramids of Giza and I highly recommend that you arrive as early as possible in order to have the opportunity to wander around the site without having to deal with the massive crowds that arrive by bus during the morning and afternoon hours.

The Giza Pyramid Complex consists of three great pyramids which were constructed by the people of Memphis in the ancient capital of Egypt.

The complex was used as the official burial grounds for royalty and to honor three important kings.

All three pyramids were built west of the River Nile, making the burial place of their kings to coincide with the setting of the sun.

The pyramid complex also includes other great monuments like the Great Sphinx of Giza, the Valley Temple of Khafre, the Giza Necropolis and more.

No visit to Cairo is complete without spending a couple of hours marveling at the Great Pyramids of Giza.

When people think of visiting Egypt, the first thing that comes to mind is the Great Pyramids of Giza as these are the most popular pyramids in the world — but did you know that Egypt is home to 138 different pyramids?

What most people fail to realize is that there are many more pyramids in Egypt that were also built to honor important Egyptians figures.

Not only is Saqqara home to the stunning Step Pyramid of Djoser, it’s also home to a museum (highly recommended) dedicated to Imhotep, a man who was likely to be the brains and the architect behind the pyramid itself.

A visit to Saqqara is something I always recommend, even during a short trip to Cairo and you can actually visit both the Pyramids of Giza and Saqqara all in the same day.

Evening Recommendation: In the evening, I recommend renting a felucca and sailing the Nile at sunset.

After covering the majority of the sights in Giza and Saqqara, it’s now time to visit some of the some more recommended attractions such as the Egyptian Museum, the Citadel and the Mosque of Muhammad Ali.

It’s your final day in Cairo — let’s make the best of it.

I recommend spending your final morning in Cairo wandering around the Egyptian Museum which is located in downtown Cairo, just steps from Tahrir Square.

Built in 1901, the Egyptian Museum is one of the oldest and most important museums in the world and is home to the world’s largest collection of Pharaonic antiquities (120,000+ artifacts).

Tip: Take your time. There is a lot of information and artifacts to digest here.

Among the items on display are ancient mummies, artwork, jewelry and even the incredible mask of King Tutankhamun which has been described as the most exquisite object ever created by hand.

On a grander scale, you can also find large statues of the great King Amenhotep III, his Great Royal Wife Tiye and many more.

If you are planning a two day itinerary for Cairo, the Egyptian museum is something that absolutely cannot be missed.

Note: The brand new Grand Egyptian Museum is currently under construction near to the Pyramids of Giza Complex and is set to open sometime in late 2020.

After you’ve finished up at the Egyptian Museum, it’s time to head out to the Citadel where you’ll have the opportunity to learn about the dynasties of the great pharaohs of Egypt, the nations religious shift to Islam and the history behind the take over by the Ottoman Empire.

The Ottomans ruled the land of Egypt between the 13th century and the 19th century and left many great structures behind to mark their presence.

One of the great structures was a medieval fortress known as the Citadel of Saladin, located high up on the rocky prominence of the Mokattam hills.

The Citadel of Saladin features all of the typical characteristics that a medieval fortress should have from high-standing gateways to stone towers and fortified walls.

Within the Citadel, there are four mosques, the most popular being the Mosque of Muhammad Ali (must see), as well as three different museums, and the Gawhara Palace which was built and named after the Ottoman governor’s wife, Gawhara Hanem.

Among the many impressive structures that are housed inside the Citadel of Saladin sits the Mosque of the great Ottoman Governor of Egypt, Muhammad Ali Pashan.

This mosque was constructed between the years 1830–1848 and is also known as the Alabaster Mosque — the most famous mosque in all of Egypt.

Many people are drawn to this mosque due to its architectural beauty, with its perfectly structured archways, grandiose chandeliers, and its many colorful domes.

Although the mosque contains the remains of the late governor, Muhammad Ali, rumor has it that he actually had the mosque built to honor the memory of his son who passed on before him.

ℹ️ If you’re interested in setting up a custom itinerary or hiring my recommended guide in Cairo, please feel free to contact me.