The Adventures of Kayaking Lake Nicaragua 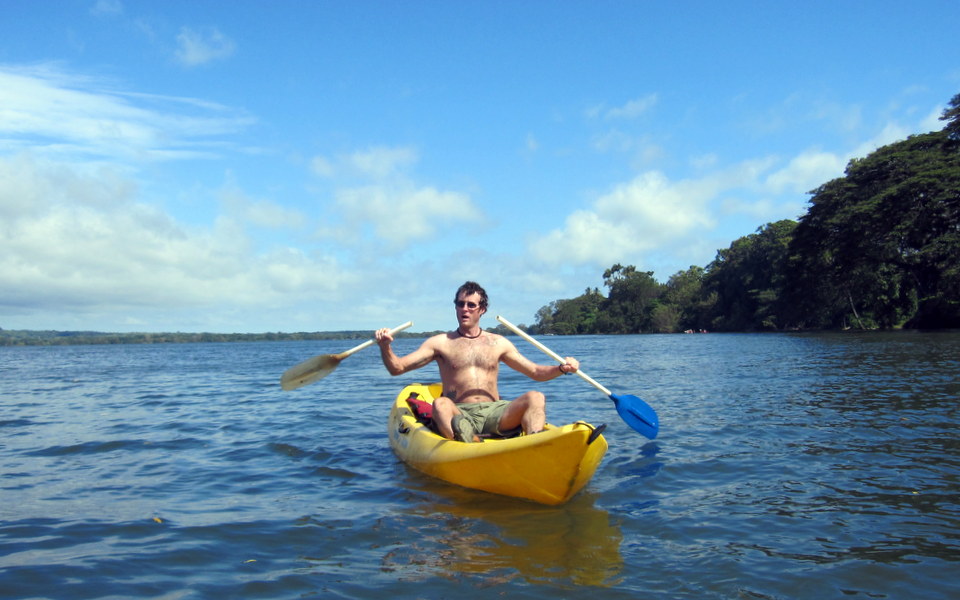 Did you miss: Inspired by a stranger named Ben? If so, be sure to check it out!

Home away from Home

As soon as I dropped my bags at Hacienda Merida, I knew I would be staying for a while. The overall atmosphere of the hostel was better than any I had experienced through out my travels of Nicaragua. There’s just something about this place that makes you not want to leave.

Could it be that you’re within twenty steps from the edge of Lake Nicaragua? Was it the fact that you could lounge all day in one of the many hammocks hung around the property? How about those Ometepe sunsets? You do know that Hacienda Merida is the number one sunset spot on Ometepe, right? 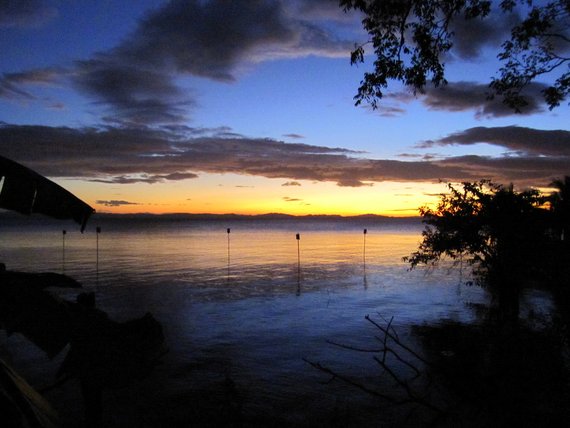 If you’re not big into sunsets, no problem! There are a multitude of activities for you to get involved in during your stay here including:

During my stay I took part in two of the aforementioned activities on the island, one of which was Kayaking on Lake Nicaragua! 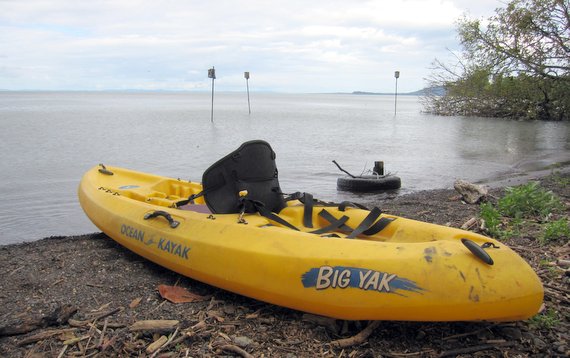 My buddy Ben and I were talking about things to do on the island and he mentioned he had taken a kayak out a few days earlier. The next morning we woke up, grabbed our life jackets and headed for the edge of Lake Nicaragua with our kayaks and paddles in hand.

Ben jumped in the Malibu Two XL while I hopped in the Big Yak! The differences were that Ben’s kayak was actually a double kayak and mine was a single kayak with a wider body. I’m fine with not rolling over and splashing around in Lake Nicaragua as it’s supposedly one of the only lakes in the world that is home to fresh water Bull sharks! In case you didn’t know, Bull sharks are one of the most aggresive sharks in the world. Just an FYI! 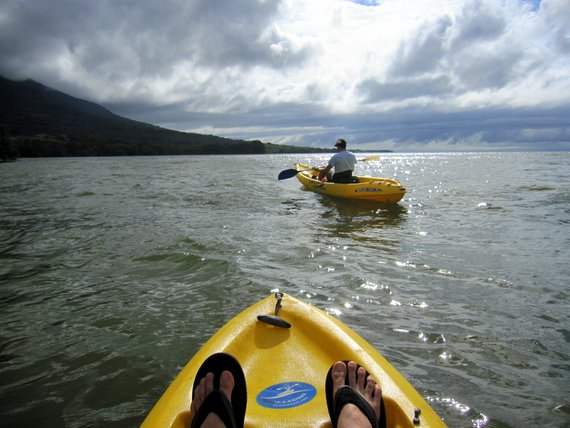 As I set off on my trusty Big Yak, I followed along closely behind Ben. Fortunately, Ben was the expert out here on the water today as he had been out kayaking once or twice on Lake Nicaragua during his stay so far. To say he’s the expert is sort of scary, right?

This was officially my second time to ever try kayaking. The first time was back in summer of 2008 when Liz and I did some sea kayaking in Dubrovnik, Croatia and we found it to be a really good time.

At first I was flailing around with my paddle trying to get the hang of paddling evenly and therefore efficiently. The weather was overcast when we set off from Hacienda Merida but by the time we reached our first spot the sky had lit up, the sun was shining and the wind started to really blow.

Yes, real monkeys! Only, these ones WILL attack you! Wait, we all know how unpredictable and overly aggressive monkeys can be, don’t we? My point is, stay as far away as possible from these dirty little creatures!

As we approached the first of two islands that are inhabited solely by two or three spider monkeys. We could see them running and jumping from tree to tree. They heard us coming from a mile away and I’m assuming they were hoping we were bringing them boat loads of food. Not us, and not today my frisky little friends.

Two weeks prior, two women who were inexperienced kayakers set off to visit the monkey islands. Upon arriving the winds started to pick up and eventually blew them in close to the shore. Can you guess what happened next? The monkeys got extremely curious and most likely thought that they might have some food so they jumped from the trees straight on to the two kayaks below and proceeded to maul the poor women. The word is that one of the women had a chunk of her nose bitten off as well as several scratch and bite wounds all over her body.

Here’s a photo of one of the women lying in bed after the attack. 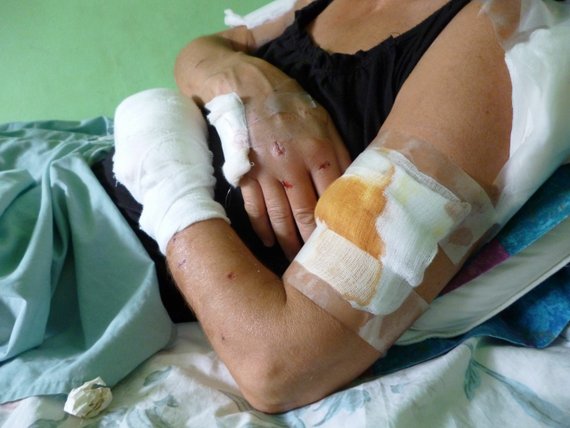 Moral of the story is, I never got close enough to take any decent photos of these crazy monkeys though I did see them screwing around up in the trees in the distance.

From the first island we made our way over to the second island which is home to more than a few howler monkeys. Have you ever heard a howler monkey before? They are seriously creepy!

Note: This is not my personal video. Video credits: Vikarius

After getting our monkey fix we spent some time graciously paddling towards our next destination, the Rio Istian swamp which is home to a wide variety of birds, bats, crocodiles and more howler monkeys!

Along the way we stopped for a few photo ops including this cool shot of me with Volcano Maderas in the distance. 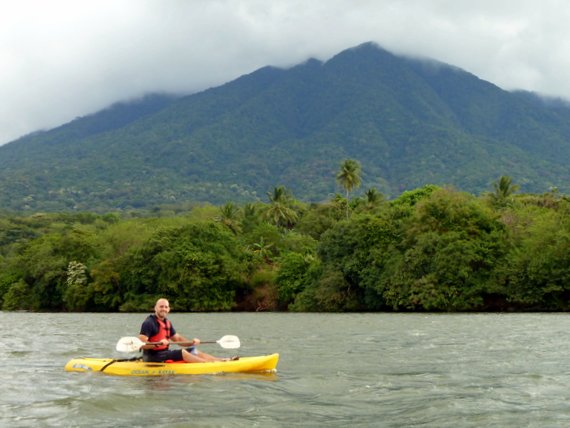 The wind started to really pick up on the lake so small waves started to form. Not fun! Once we were about half to way Rio Istian, Ben encountered some technical difficulties with his paddle. He thought had heard it making a cracking noise. It turns out he was right. After one brisk motion with his paddle in the waves, Ben’s paddle broke in half! 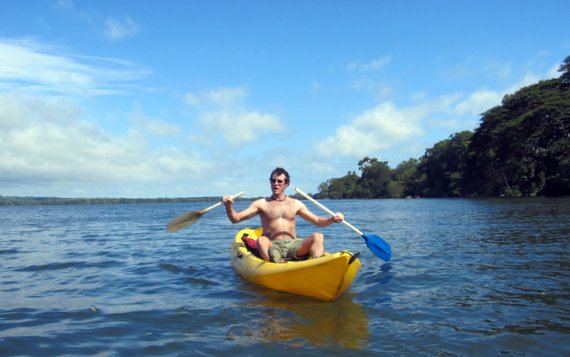 Up sh*t creek without a paddle

He wanted to keep on heading in the direction of Rio Istian but I knew that wasn’t the best idea especially as the wind was getting stronger and stronger by the minute. We spun around and attempted to make it back to Hacienda Merida but after 20 minutes Ben’s arms were spent.

We ended up pulling our kayaks up next to each other and I successfully transferred my gear and myself over into the back of his kayak without falling in.

I handed my paddle to Ben and we headed towards shore while I held on to my kayak let it drag along behind us. By the time we reached the shore Ben was exhausted and rightfully so!

That was enough adventure for one day. Next up, Trekking to San Ramon Waterfalls. Stay tuned!