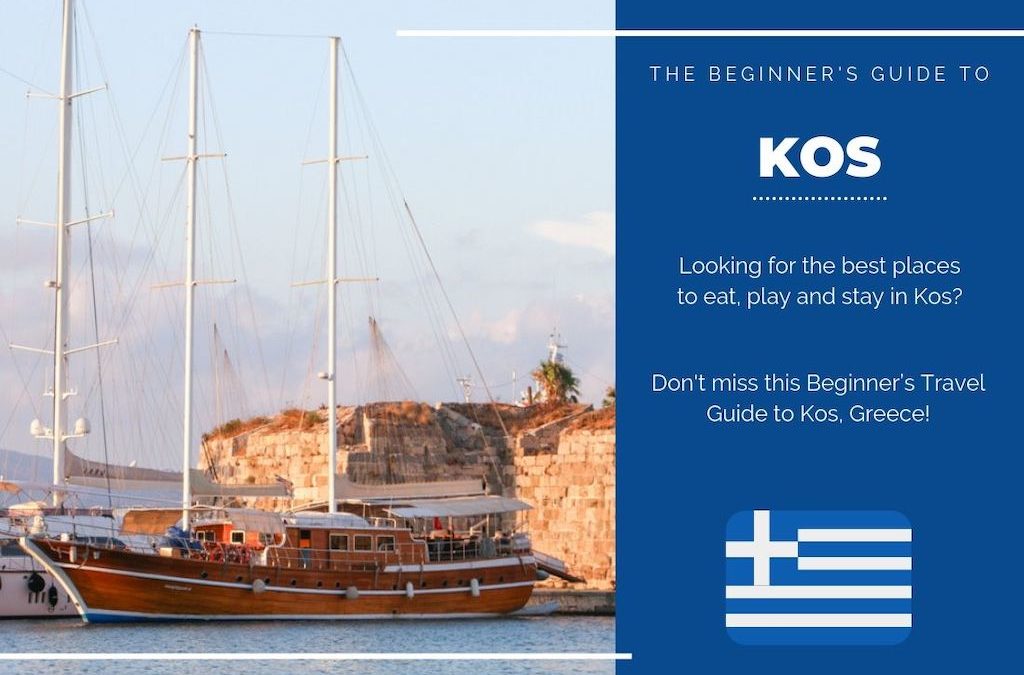 Sandy beaches surrounded by clear, blue-green water, ruins and castles that date back to the Bronze Age, and picturesque villages unlike anywhere else in the world – the island of Kos in Greece is every wanderlust’s dream come to life.

Located in the Aegean Sea about 16 miles off the coast of Turkey, Kos is part of the Dodecanese group of islands.

It is the second most populous island in the region and has a vibrant tourist scene that is primarily the driver of the island’s economy.

In this guide, you’ll learn all about Kos Island and its many beautiful beaches and attractions.

From accommodation options to modes of transportation to activities and things to do on the island, you’ll have everything you need to be able to plan a fun and exciting holiday. But first, how does one get to Kos?

Before You Go: Travel Insurance

When planning a trip to Greece and the Greek Islands your first priority should be to make sure you make a small investment towards your health and well being by considering an affordable travel insurance policy for your trip.

Not only will this budget friendly travel insurance policy cover you if your bags are lost/stolen and if your flight is delayed/cancelled, but you’ll also be covered for all medical and injury related issues as well.

Let’s face it. No parents, family or friends want to have to cover the cost of you getting medevaced home from Greece.

Especially when you least expect it.

Do yourself a favor and consider purchasing travel insurance coverage for your trip so you can rest assured that you’ll be taken care of in the event of a serious emergency in Greece.

P.S. You won’t believe how reasonably priced this travel insurance is.

Why wait? Get a Travel Insurance Quote for your trip today.

How to Get to Kos

Kos is an island located about 280 miles from Athens and 625 miles from Thessaloniki. You only have two options on how to get to Kos: by air or by ferry.

The only airport on the island is Kos International Airport “Ippokratis” (Hippocrates).

It is located near the village of Antimachia, which is about a 30-minute drive from the principal town of the island.

By air, flights to Kos depart daily from the Athens International Airport via Olympic Air and Aegean Airlines, and between July and August from the Thessaloniki Airport “Makedonia” via Astra Airlines.

Tip: Begin your flight search by using the Skyscanner engine embedded below.

Different Greek islands on the Aegean Sea have ferry services bound for the island’s main port in Kos Town.

There are also ferries from Santorini to Kos, but they’re only available about four times a week.

Where to Stay in Kos

Depending on your budget and how luxurious you want your vacation to be, there are three types of Kos accommodations that you can choose from: Airbnbs, hostels, and hotels.

For an affordable, private, and comfortable accommodation option, why not search for Airbnbs in Kos?

Rental homes give you the best value for price, have convenient (and often central) locations, and offer flexibility, personalized services, and a real local atmosphere.

Check out these Airbnbs in Kos:

🔎 If this is your first time using Airbnb, we recommend you read our Insider’s Guide to Saving Money on Airbnb Apartments.

While hostels are not as luxurious as hotels or as homey as Airbnbs, they are often the most affordable accommodation option. Staying at hostels also give you the opportunity to meet other travelers from around the world.

Here are the best hostels in Kos:

Hotels provide amenities that Airbnbs and hostels may not have. Because this Greek island is a summer holiday destination, luxury hotels in Kos usually get fully booked during peak season.

If you’re traveling here during the summer months, make sure to book a room in advance in one of the best hotels in Kos:

Things to Do in Kos

Kos is a popular summer destination because of its gorgeous beaches. If you’re not much of a beach person, don’t fret.

There are plenty of other things to see and do on the island which don’t involve the beach.

For instance, Kos is rich in history, with buildings and ruins that date back to the early Byzantine and Roman times. Kos is also known for its ecotourism spots.

Here is a list of interesting things you can do in Kos:

The Antimachia Castle is a Venetian Castle that was built by the Order of the Knights of St. John in the village of Antimachia.

Construction of the castle began during the early 14th century and was completed in the late 15th century.

Built in the early 19th century, the Amallos Mill in Antimachia has belonged to the Amallos family for four generations.

It had been out of order since the 1980s due to improper care that resulted the disintegration of the main mechanism, but it was restored about five years ago by the current owner.

Now it can grind about 600 to 800 kilograms of wheat for eight hours a day given that the weather is good and the winds are strong.

The wheat flour that it produces is used to make biscuits and other baked goods that you can purchase onsite.

The Nerantzia Castle, also known as the Kos Castle, was built by the Knights of St. John in Kos Town.

Today, there is a museum inside the Nerantzia Castle where you can find several altars, sculptures, and inscriptions from centuries past.

The different architectural styles within the castle, which was a result of its long period of construction, will also pique your interest.

The Roman Odean of Kos (in English, the Roman Auditorium), is believed to have been one of the most important public buildings on the island.

It was designed originally to host musical competitions and performances, but it may have also been the meeting place of the local senate.

Built in the 2nd century, the Roman Odeon has fourteen rows of marble seats that have a capacity of 750 people.

In the area under the seats (which is called the ), there were two semicircular porches (called porticos) supported by columns.

These porches led to a few rooms that were believed to be shops or workrooms during times.

The Ancient Agora used to be the center of Kos Island and was the site of temples, baths, houses, and a marketplace.

Palio Pyli (in English, Old Pyli) was a settlement in ancient Greece that flourished during the Byzantine era.

In fact, you can still visit the Byzantine Castle of Palio Pyli that was sieged by the of St. John during the medieval times.

Most of the structure is now ruined, but the site still offers a panoramic view of the island and the Aegean Sea.

From here, you will also have a view of nearby islands, such as Kalymnos and Pserimos, and the coast of Turkey.

Kos is a scenic island that makes for a great cycling destination. In fact, some even call it the “island of bicycles” in Greece.

There are several routes you can take if you want to cycle around Kos, including:

Even though it’s not one of the island’s main tourist attractions, it’s still a gorgeous place to visit while you’re here.

It has a traditional layout with whitewashed houses and narrow paved alleys that are a signature of Greek architecture.

The surrounding environment consists of olive groves and vineyards. Tourists like to head to Asomatos to hike and be one with nature.

It’s surely one of the best ecotourism spots on the island.

Kefalos can refer to two things: a town in the western coast of Kos or a municipal community consisting of the beach settlements of Kefalos, Kamari, Kampos, and Onia.

Either way, these parts of the island are known for their sandy beaches, hotel resorts, and bars and taverns.

There are several other attractions in Kefalos including the ruins of a castle from the medieval times, the Ayios Stefanos Basilica, and the Ayios Ioannis (Thimianos) Monastery.

For people who love to stay close to the sea and to party, Kefalos is the perfect spot on the island.

Watch the Sunset from Zia

At 2,775 feet, the peak of Mt. Dikeos (or Mt. Dikaios) is the highest point on the island of Kos. You can find the mountain in Zia, a small village located southeast of the principal town.

Tourists love to visit Zia to hike Mt. Dikeos and watch the sunset.

Aside from hiking, you will also find shops, cafés, and attractions here.

If you’re staying in Kos Town during your vacation, Zia is just a 25-minute drive from there.

According to Greek mythology, Asclepius was the demigod of healing who was so skilled as a doctor, he had the ability to bring people back to life.

The Asklepion (or Asclepeion) temples were built in different parts of Greece in his honor, and one of these temples can be found in the principal town of the island of Kos.

Here, ancient Greeks brought their sick to seek healing, both spiritually and physically.

But today, tourists love to visit the Asklepion temples for their historical and mythological significance.

Review the Tour to Asklepion

As mentioned earlier, Kos is a popular summer holiday destination in Greece because of its beautiful sandy beaches that open up to the turquoise waters of the Aegean Sea.

Below, you’ll find a list of the best beaches in Kos:

When you arrive in Kos, Greece, you have three main modes of transportation. You can rent a bike, rent a car, or get around by taxi.

Most tourists like to rent bikes while vacationing on the island because it gives them the freedom to explore different areas and regions of Kos that may not be accessible by car.

There are several bicycle rental places on the island including:

If you want to cover more land while in Kos, renting a car may be the best option for you.

It gives you more freedom and flexibility than waiting for a taxi to take you places.

Finally, taxis are also a convenient way to get around Kos during your vacation.

From the airport, you will find taxis that can transfer you to your hotel. There are also taxis around the island when you want to explore.

Now that we’ve covered the best accommodations, attractions, and beaches on the island, let’s talk about the best time to visit Kos.

Below, you’ll find everything you need to know when it comes to deciding when to visit Kos:

The average Kos weather depends on which month you decide to visit. Usually, the weather is warm and sunny between May to July.

The hottest month on the island is August, when the average temperature reaches 89.6°F during the day and 75°F at night.

The busiest months of the year in Kos are between late May and July due to the summer peak season.

If you want to avoid the crowds, it is recommended to visit Kos before the season begins in late April/May to early June.

April is usually the least crowded month in Kos, although the weather may not be ideal if swimming and sunbathing is your reason for traveling.

Kos is a gorgeous Greek island in the Aegean Sea that’s full of natural beauty and historical significance.

With its beaches, ruins, temples, attractions, and activities, you will surely never feel bored while visiting this island.

At the same time, it is also an idyllic spot for those who just want to have a refreshing and relaxing vacation by the sea.