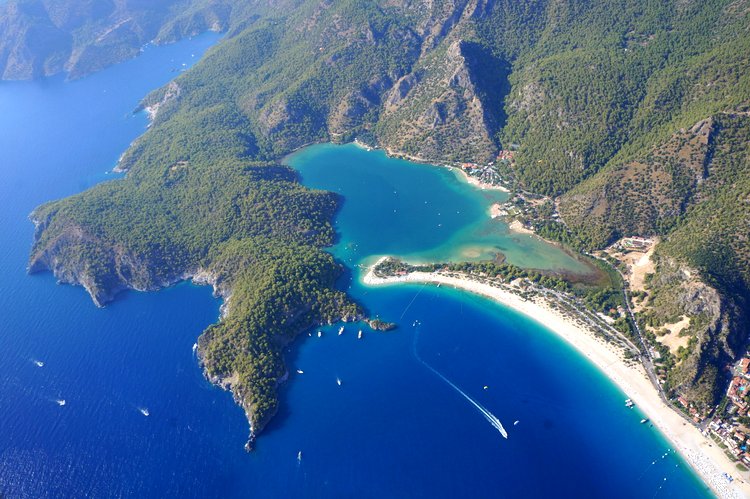 As many of you know, last week we shared some of our most memorable travel experiences to date (Four Days of Pure Bliss on the Mediterranean! & The Most Incredible Hot Air Balloon Ride EVER!, both of which occured during our recent trip to Turkey. What we have yet to mention is the day we flew 6,500 feet over one of Europe’s best beaches!

When we first heard that we would have the opportunity to take a paragliding flight during one of our upcoming stops on the blue cruise, we instantly knew that we would have to take full advantage of our situation and knock yet another item off of our adventure-filled bucket lists.

After a great breakfast and a short swim, we made our way towards Oludeniz, a small village and resort town on the coast of Southwestern Turkey.

We had no idea what Oludeniz was like as we hadn’t done any research on it prior to hopping on the cruise and I think this added to our excitement as we approached our stop in Oludeniz and not only noticed how beautiful it was, but it was also overly exciting to see clusters of paragliders swirling around in the air above us.

It turns out Oludeniz is known for having been named one of Europe’s best beaches as well as one of the best places in the world to paraglide. SCORE!

THE RIDE UP IS SCARIER THAN THE FLIGHT…

“Good luck! The ride up to the top is scarier than the actual paragliding flight itself!” – Bec

The ride up to the jump point is scarier than running off the side of a mountain? Yeah, right.

We laughed as we brushed it off as an exaggeration.

The ride up to Mount Babadag, the place where all of the paraglider pilots setup for their next flight was nothing less than horrifying. At one point I remember glancing over at Liz, who at the time was trying her best not to look at the winding road ahead of us, and I said “I’m so glad we’re jumping off this cliff because there’s not a chance in the world that I’m taking this van back down.

The paraglider pilots are sounds asleep, literally snoring away as we make the climb to 6,500 ft. The ride to the top takes approximately thirty minutes and it’s a scary one, especially once your approach the peak.

The driver makes trip seem like a walk in the park. He’s chatting away and glancing towards his friend in the passenger seat as we wind our way up the mountain. The road is barely wide enough for the van but it’s a two-way road. The guard rails are non-existent and you can just about watch the gravel roll down off the sides of the long curvy road ahead. The curves in the road go left and right every 10 seconds or so yet our driver decides he’ll just make slight gestures with the steering wheel so that we cut some of the corners. I swear it was part of the paragliding experience.

Maybe they were trying to scare us before we actually took flight? 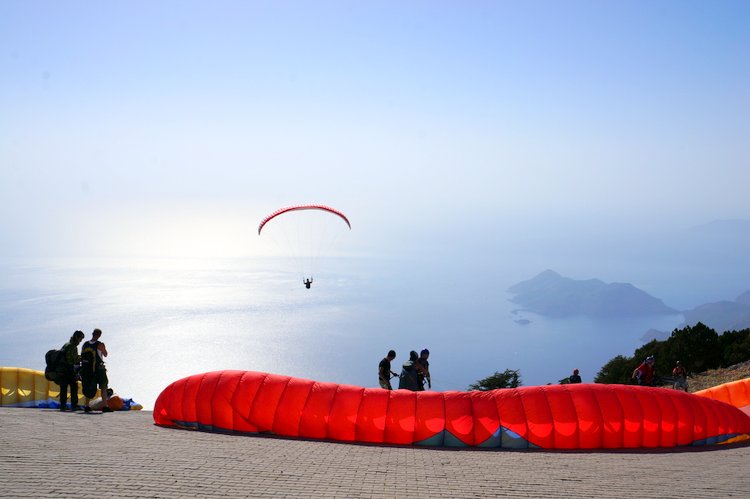 When we arrived at the peak there was a big sigh of relief. If anything, these guys just made us want to get hooked up to this kite even sooner.

I whipped out my trusty GoPro HERO3 thinking I was ready to shoot some awesome footage only to be told by my pilot that I couldn’t bring it along with me. Huh!? 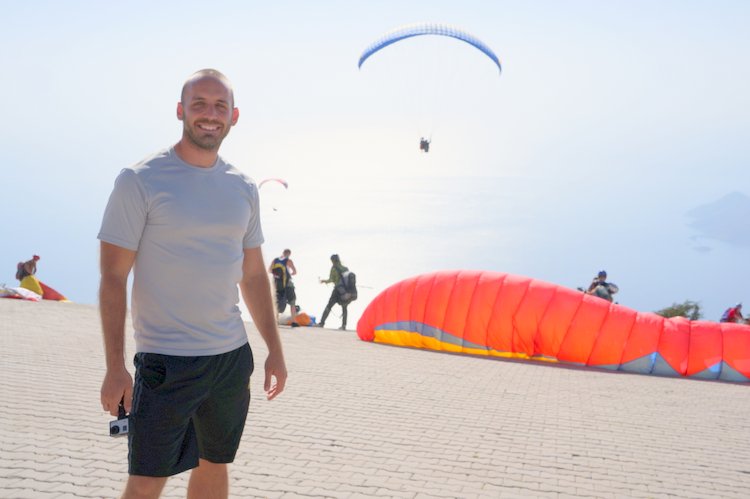 Although it would have been nice if they had told me prior to taking my GoPro for the ride with me, I sort of understand where they’re coming from on this one. Granted, I didn’t have a tether or anything to connect it to my body. I would have loved to have my Quikpod, but I lost that a few months ago while cliff jumping in Thailand. I could have taken my Chesty along with me but I thought it would be stupid to have the camera mounted to my chest when I was ultimately going to be sitting in a La-Z-Boy position.

Fortunately, I had my new Sony NEX-5R on hand which had a lanyard that I could wrap around my neck during the flight. The pilot seemed cool with it, so I was pretty content in the end with not being able to take my GoPro up with me. 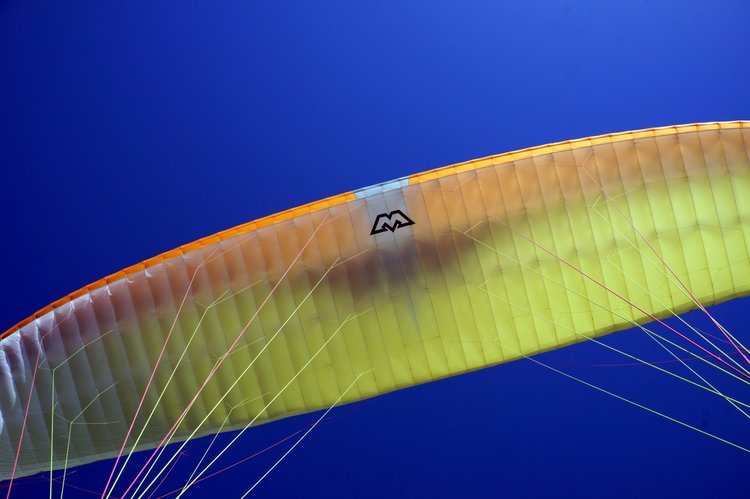 Liz and I suited up, hooked up to our pilots and received one simple instruction.

I try to sprint on his command but it’s a little awkward to do so when you’ve got a 225lb guy attached to your back. All I know was that my running abilities were enough to get us off the ground and into the air, high above the stunning landscape of Oludeniz below. 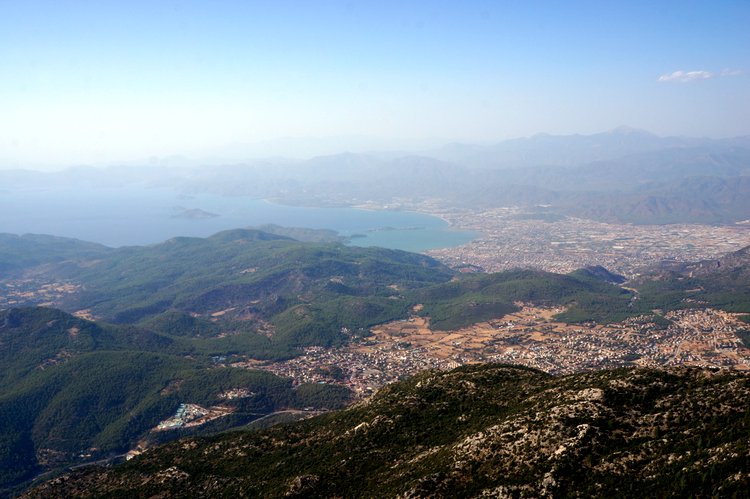 There’s really nothing like the feeling of taking flight. I could cruise around the skies all day and never get sick of it. There’s something to be said about being a paragliding pilot.

Think about it for a minute.

You wake up, eat breakfast, take five scenic flights per day and call it an evening. Not only can you travel the world and work in all sorts of interesting destinations across the globe, you also get paid to fly! 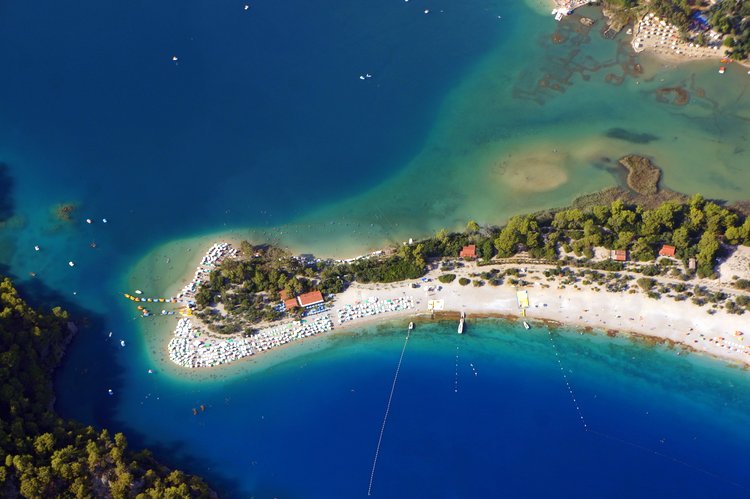 It was hard to believe all the hype of Oludeniz being one of Europe’s top beaches until I actually witnessed the beauty from above. I mean, just look at this beach!

We spent about 15 minutes cruising around the skies at what seemed to be a very slow and quite relaxing speed. It wasn’t until I asked the pilot to take the flight to the next level that he started to realize that I wasn’t here to just sit back in my La-Z-Boy and take in the views.

I’m an adrenaline junkie and I want to feel some of that g-force!

As soon as I muttered those words we instantly began to spin towards the Earth at a high rate of speed. I screamed out in excitment (not like this death scream), but more of a HELLLLLLLLLLLLLLLLLLLLLL YEAHHHH! type of scream.

The g-forces were serious and I was loving every second of it as we spun through the air. The second the pilot let up on the cord we were back in cruising mode and approaching our landing. 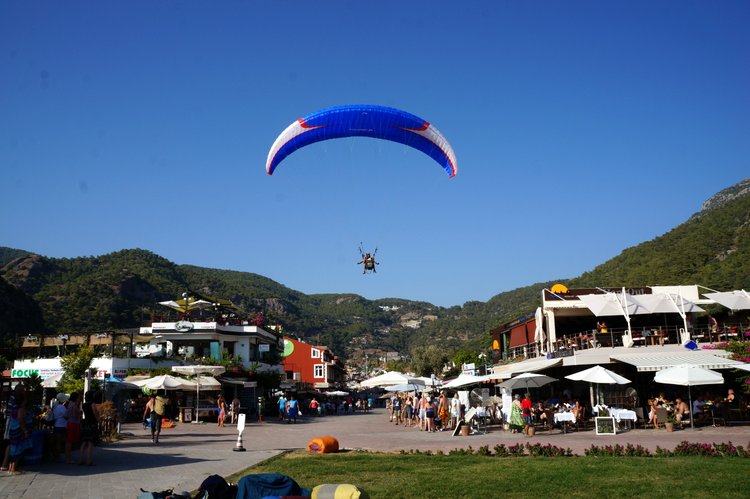 The best part about the landing is that we came flying in over one of the main roads leading to Oludeniz beach and made our smooth landing between tourists and onlookers strolling along the boardwalk below.

THINGS TO KNOW BEFORE YOU GO

1. Wear proper shoes! If you show up in flip flops you’ll either have to wear someone elses shoes or not be allowed to fly. Both options stink (literally) in my opinion.

2. If you decide to bring a camera, be sure to bring a lanyard or neck strap for it or you’ll be shi*t out of luck!

3. If you get car sick, please skip the whole paragliding experience. (Yes, we had a woman in our group who gets car sick and decided to give it a shot) Guess what? She got sick and threw up mid-flight. EWW! I would hate to be both the pilot and a beach-goer that day.

Note: Paragliding flights can last up to 40 minutes. Even if you’re not into paragliding, you can spend some time hanging on the boardwalk watching the brave souls come in for their landings with smiles from ear to ear.

GET 10% OFF YOUR NEXT FLIGHT FOR MENTIONING US!

Step 2. Fill out # of persons, date and where you will need to be picked up/dropped off (if known). When finished, click Add to Cart.

Step 3. Add “Referred by Ryan at Pause The Moment” in the Notes field during the final step of checkout. before submitting your reservation in order to get your 10% discount!

Step 4. Shoot a quick email to info@alaturkacruises.com telling them that you just made your reservation and you would like to apply the 10% discount to your purchase and they will amend the final price for you.