25 Facts About Me – Travel Edition 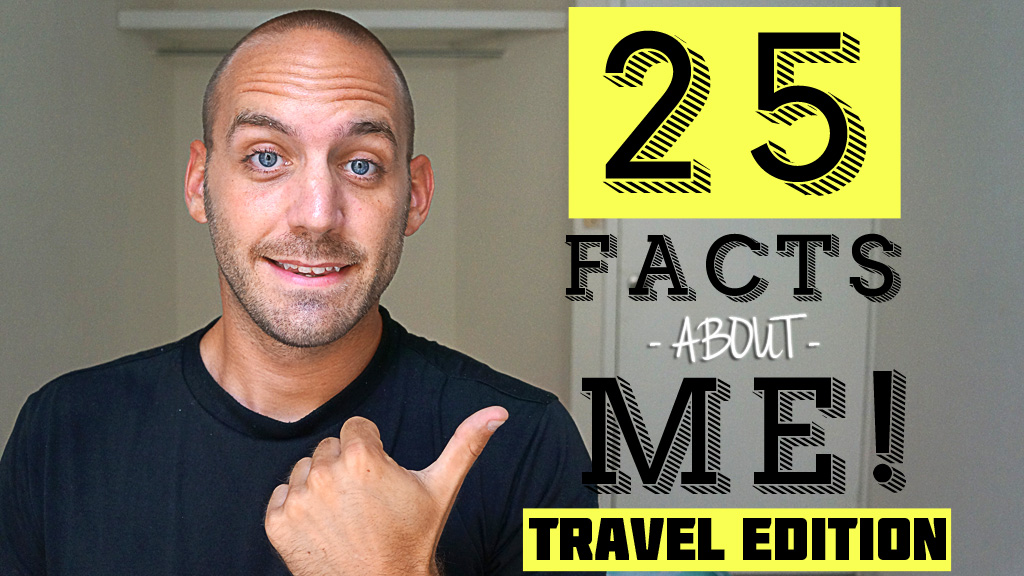 25 FACTS ABOUT ME | TRAVEL EDITION

Hey guys, so today I’m going to be dishing out 25 really cool travel facts about myself that I think you might find interesting.

#1. I’m originally from New England, but I hate the cold weather and I despise the winters there.

#2. My first ever paragliding experience took me over 6,500 feet in the air over Oludeniz. It was amazing.

#3, I once pedaled a vintage bicycle down the entire Pacific Coast of the United States from Seattle, Washington to the border of Mexico (1,700 miles). It was by far the the toughest yet the most rewarding experience of my life.

#4. In 2012, I jumped from the top of the Moses Mabhida World Cup Stadium in South Africa and I wasn’t scared at all. Listen.

#7. Lake Bled, Slovenia is hands down one of the most scenic places I’ve ever been to. Go there!

#8. In case you haven’t noticed, Thailand is my number one favorite country in the world.

#9. I survived a roll-over accident in the middle of the Sahara Desert. It was so scary!

#10. I’ve been skydiving on three different occasions and even tried indoor skydiving in Las Vegas.

#11. I’ve taken a helicopter tour over Cape Town, a seaplane tour over South Beach, island hopped in Fiji, and even landed on a dirt runway in the middle of Kruger National Park.

#13. I’ve been fortunate enough to visit more than 35 countries and counting since 2008 and I have no plans of stopping anytime soon.

#15. I once went sledding down the side of an active volcano in Nicaragua. What was I thinking?

#16. Thanks to my blog, I’ve worked as an influencer for companies such as Sony, Haagen-Dazs, KEEN footwear, Intel and so many more.

#17. I took my first official surf lesson in Fiji but I really didn’t learn until I actually took a lesson in Costa Rica.

#18. I once released 300 newborn baby sea turtles into the wild in San Jose del Cabo.

#20. I once spent nearly 30 hours on a bus from Vang Vieng, Laos to Hanoi, Vietnam. As you can imagine, it was horrible!

#21. I’ve got two passports, one American and one Irish. Dual citizenship, baby!

#22. I’ve been on safari in South Africa and I think it’s something everybody in the world should experience once before they die.

#23. I’ve been to Egypt three times and I still can’t get enough of it. I love Egypt!

#24. I took my first standup paddleboard Yoga class in Aruba with an Instagram superstar. Ooh, who was it?

#25. In case you haven’t put two and two together yet, I’m the guy behind Pause The Moment. Thanks for following along!

Well, that just about wraps up this session of 25 really awesome travel facts about me. I hope you guys enjoyed it. Stay tuned for more travel deals, more travel experiences, reviews and more!