25 Incredible Things to Do in Santorini, Greece 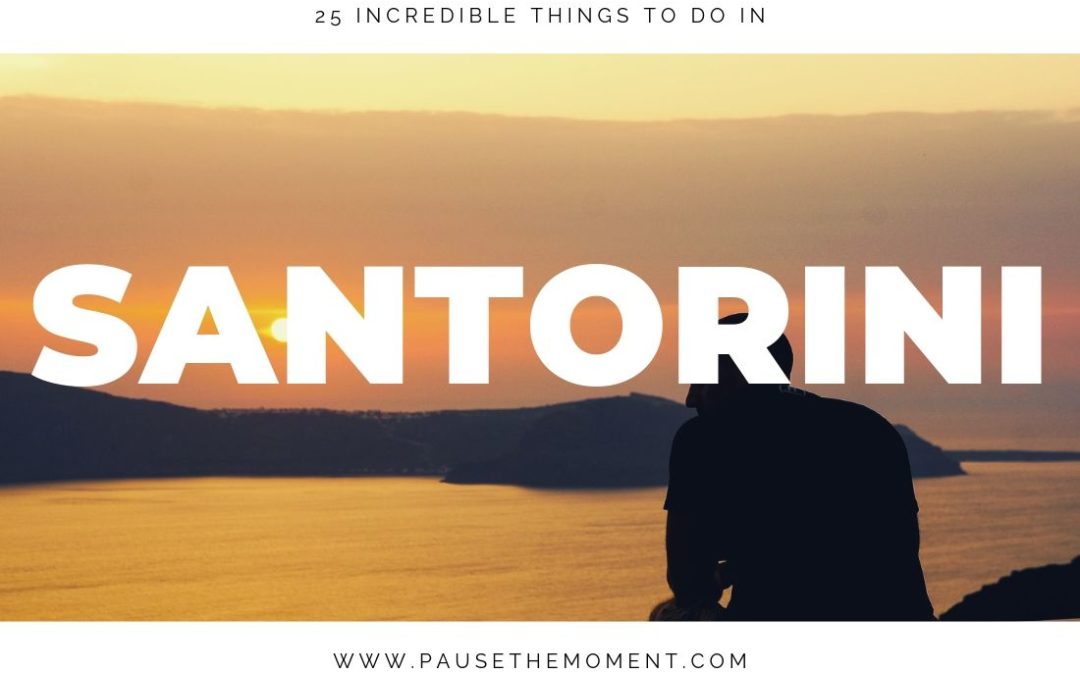 Let’s face it, the Greek island of Santorini is on just about everyones travel bucket list.

Due to its overwhelming beauty, Santorini is a perfect island for those seeking romantic getaways, destination weddings, and honeymoons that will never be forgotten.

If you’re looking for Santorini accommodation ideas, be sure not to miss:

Top 25 Best Things to Do in Santorini

There are private and group tours with professional guides through the vineyards, wineries and wine cellars of Santorini.

One gets to enjoy traditional foods together with twelve different varieties of Santorini wine such as Assyrtiko and nykteri.

During the wine tours, one gets to visit an ancient Minoan city called Akrotiri that was destroyed during the previous volcanic activity on the island.

What’s a visit to Santorini without experiencing some of the best-made seafood delicacies?

There are numerous restaurants located on and near Ammoudi Bay that serve not just seafood, they include local and international cuisines as well.

Some of the most famous restaurants in this area include Dimitris Ammoudi Tavern, Sunset Ammoudi, Taverna Katina and many others.

Red beach is one of the most popular beaches south of Santorini, located near the excavation site of the famous Akrotiri town.

It can be accessed by bus from Fira town or bat from Perissa, Kamari or Akrotiri port. Enjoy the beautiful beach with rugged sceneries of steep hills overlooking the ocean.

Although there are no provisions for water sports, one can still enjoy the marine life through snorkeling.

Located at the rim of the active volcano, the proof of past volcanic eruptions is evident in the black sand on the beach.

One can engage in various activities such as sunbathing, snorkeling, swimming, scuba diving, etc.

There are a variety of small hotels in Perissa, most of which are steps from the black sand beach.

The history of volcanic eruption played a key role in the formation of Skaros Rock.

It became more important because it could be fortified to keep away the local’s enemies with initial fortification dating as far back as the Byzantine Empire of the 13th Century.

Today, tourists can hike and take photos of the island from the rock.

One can also visit the Chapel of Panagia Theoskepasti which is still being used to date.

Watch the Sunset in Oia

Witnessing a sunset in Oia is one of the most popular things to do in Santorini.

While Oia can get overwhelmingly busy during high season, there are things you can do to avoid the crowds.

One of the top tips for beating the crowds of Oia during sunset is to take a sunset sail or hire your own private boat that you can sail off the coast of Oia.

One can also go to Ammoudi Bay and stand on the steps, on the northern part of the village or on Byzantine castle.

One of the most important economic activities is fishing to feed the population on the island.

As a tourist, one can join the many fishing expeditions with experts and learn how they catch fish.

On tourist fishing expeditions, activities such as swimming, and scuba diving are also provided.

After the expeditions, one gets to enjoy seafood prepared with the catch of the day with Santorini wine and drinks.

Santorini’s volcanic activities have led to the development of interesting features such as hot springs such as Nea Kameni islet which pulls in many tourists annually because of its healing properties.

The springs contain sulfur characterized by its yellow waters that are believed to contain medicinal properties.

There are frequent cruises to visit the volcano and see sulfur steams straight from the volcano.

Enjoy the Landscape from old Port Fira in a Cable Car

Instead of walking up the steep hill or taking an uncomfortable donkey ride to Fira Town, one can use a cable car.

The views of the island from the cable car are spectacular if a person doesn’t mind waiting when there are a lot of tourists.

It costs about four euros to go up and down the cliff in the cable car.

The Caldera Hike (From Fira to Oia)

For hiking lovers, this tour is very impressive not only because of the terrain, but the history of the caldera itself.

See the settlements along the trails which make the Santorini Caldera, the only one with human settlements.

From the rim of the caldera, one gets to soak in the breath-taking views of the island for photography.

Learn the myths associated with the caldera such as Plato’s Atlantis.

The Island of Santorini is rich in history and culture both of which has been immortalized in Megaro Gyzi Cultural Centre.

The center offers lectures, exhibitions, performances, and shows to educate on the various aspects of the local’s spiritual and cultural advancements.

The center survived the 1956 earthquake and has since been restored to an architectural marvel. It is open from 1st Mat to 31st October.

The Koutsoyannopoulos Wine Museum traces its roots as far back as 1660.

This family-owned establishment imports knowledge to tourists on the history of the family winery as well as how some of the most famous traditional wines are made.

The architecture is old and, in a cave, which adds to the allure.

This museum has hosted Greek sculptures and contemporary paintings since 1999.

It was initially a winery started in 1861 but was later transformed to an art gallery.

There is still a modern winery in the vicinity producing high-quality wines.

A person looking to see the island in a short amount of time may find the helicopter tour interesting.

This 20-30-minute flight ensures that one has seen the white houses against the turquoise ocean waters.

One can see the Volcano, vineyards, the town on Oia, the Megalochora mansions and the beaches of Santorini.

There were the islands first capital that is now complete ruins.

The ancient city was home to some of the old empires such as the Hellenists, Byzantines, and Romans.

It offered a safe advantage for the locals as it is located on top of the mountain Messa Vouno.

Hikers can go up from the towns of Perissa or Kamari.

The Entrance fee is free for children and four euros for adults.

One gets to participate in Greek wedding traditions such as the breaking of the plates.

The Papadopoulos takes the audience on a unique journey of wedding planning, and the ceremony itself.

They offer unlimited wine to adults.

The best way to watch a Santorini sunset is from the water.

There are many places the tours go to such as Indian Bay, the black beach, the Santorini Caldera or the Thirasia and Aspronisi Islands.

One can sit by the red or black beach and watch the sunset over a picnic before going back to the hotel.

The Island of Santorini is immersed in its history and culture.

The food, architecture, and landscapes are rich with history that a tourist would enjoy discovering.

The Lost Atlantis Museum explains the myth of Atlantis, the making of traditional brew ouzo in Canava Distillery, the Byzantine church from the Byzantine empire of Panagia Episkopi and so much more.

The Akrotiri Lighthouse is an architectural marvel, believed to have been constructed in 1892.

It is located in the south of the island and switched from using fossil fuel to electricity in 1988.

It is best visited during sunsets which looks especially beautiful against the Aegean Sea.

There are also a number of taverns and seafood restaurants near the lighthouse.

There are plenty of hidden gems around Santorini that many people don’t get to explore.

These hidden paths lead to interesting sites such as the secret cave church.

Here, one gets to interact with locals and even learn the more interesting historical and cultural significance of places not frequented by tourists.

One gets to sample traditional foods and wines in little known joints.

There are tours that allow tourist to interact with local chefs and learn the culinary art of the island.

The chef trains a group of people on making traditional cuisines such as Greek salad.

One gets to sample traditional wine such as vinsanto and local brew – ouzo and indigenous Greek yogurt.

He or she explains the history of Santorini’s most famous signature meals.

One gets to taste the meals made at the end of each tour.

This is more of a pebbly beach as opposed to a sandy beach.

Its defining features are the rugged cliffs that overlook the clear blue water.

There are a stone and wooden beach bar where visitors can enjoy good food and drinks on the beach.

There are umbrellas and hammocks where one can relax and enjoy the beach.

It is also a beautiful destination for weddings because of its romantic evening ambiance brought about be the music played especially in the evening.

The volcanic activities in Santorini laid waste to the ancient town of Akrotiri.

Over the years, the town has been marked as a historic site with its remaining architecture still well preserved.

It offers insight on what ancient civilizations were like in the past on the island.

The offer private tours of the site as well as the three wineries in Santorini.

Tourists flock this beach annually because of its black volcanic sand and historical significance.

Located at the foot of Mesa Vouno Mountain, it is close to Thera, the ancient capital of Santorini.

It is a very clean beach where tourists can enjoy relaxing on the beach.

There are a number of interesting things to do at the beach such as diving, windsurfing, paddle boating, water-skiing, and many others.

There are also a number of local bars and restaurants which serve food and drinks to everyone.

Who thinks about reading while on vacation?

The Atlantis Bookshop allows visitors, thirsty for knowledge to get a taste of both fiction and non-fiction related to the history of Greece.

They started with rare books and first editions regarded as collectors’ items expanding to publishing their own material under Paravion Press.

They are open daily and offer itineraries of things to do in Santorini as well as souvenir large scale maps which as perfect for wall hangings.

Santorini is recognized all over the world as one of the most beautiful islands on the planet.

It is, however, more than just the picturesque views of the ocean and white architecture.

It is full of history and cultural significance not only to the locals that inhabit the island but to the tourists that have the opportunity to visit it.

In Santorini, there is something for people of all ages. What are you waiting for? Plan your trip to Santorini today.

🔎 Did you find this travel guide useful? If so, please comment below and be sure to share it with your family and friends.