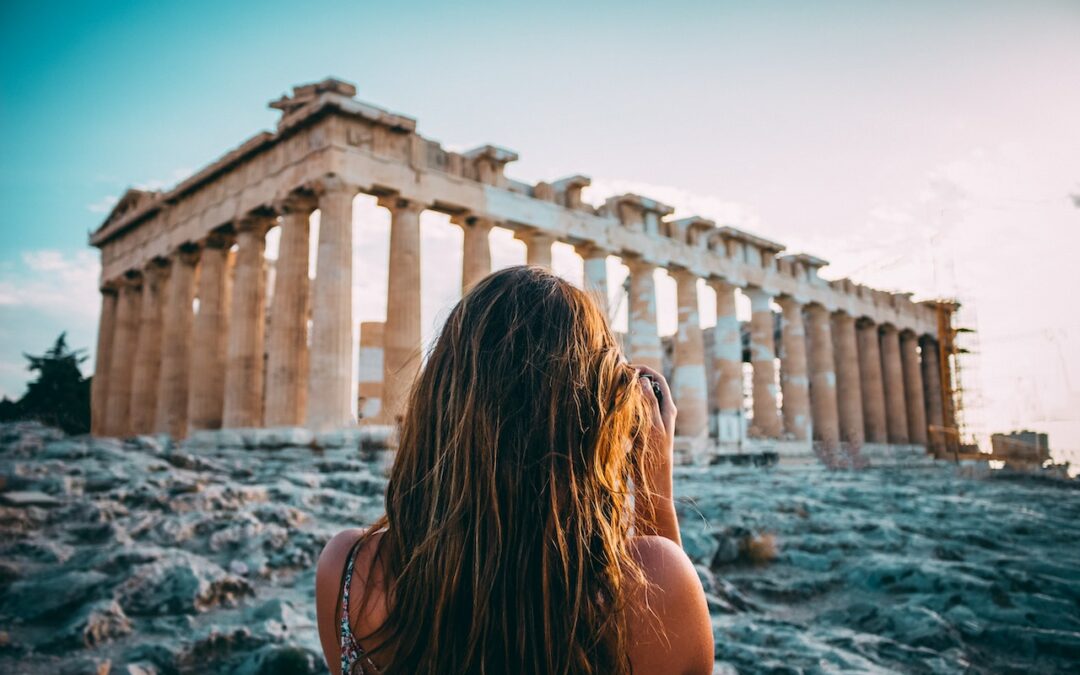 There’s no doubt that Greece checks many boxes for travelers. There are fascinating ancient monuments, hiking trails galore, charming fishing villages, and traditional hilltop towns to discover. Of course, the fantastic beach scenery, the bustling cities, and the amazing cuisine can’t be ignored either. Even though there is a lot to see in Greece, these 5 most significant destinations are the must-sees if you’re planning a whirlwind tour. We’ve come up with the best places to visit in Ellada, and here we go!

Don’t Miss: When is the Best Time to Visit Greece?

In the vastness of the Aegean Sea lies the Cycladic island of Ios. There is no doubt that Ios is one of the top party islands in the Greek archipelago, thanks to the raucous nightlife on the island, but the truth is, Ios is much more than that! Explore Ios and discover the most popular things to do, the most beautiful beaches, hotels, and restaurants, among many other things in tours to Greece!

This picturesque island in the Cyclades has the typical seductive Cycladic landscape, with white-colored houses and narrow cobblestone streets, fantastic clifftop villages, and mesmerizing beaches. Ios Chora comes alive after sundown with its bars and restaurants. It’s time to get lost in the wild party scene of Ios! It’s time to get away from the scenic beaches. Turn back with the first sun’s rays and continue your adventure! Our next stop is in Naxos!

Cycladic island Naxos lies in the south of the Aegean Sea and is the largest of the Cyclades. The smaller sister island of Mykonos and Santorini, Naxos, is just a short boat ride away. It’s still relatively unknown, which means that it’s less crowded than other Greek famous islands. Located on the Greek island of Naxos, the island is a favorite getaway spot for beach lovers, mountain villages where mules still transport people, ancient ruins, and Venetian castles. So it is only natural that Naxos would be surrounded by tales of the ancient gods and their antics.

Naxos city, also known as Hora or Chora, is the island’s capital, whether you travel by air or ferry.

Enjoy your weekend by checking into a stylish hotel by the beach that, on the one hand, is close enough to the capital for you to explore the many attractions and enjoy the atmosphere of the beautiful port. Before heading out, consider taking a swim off the golden sands of St. George Bay. Wear comfortable shoes and don’t forget your sun hat since a lot of walking will be required, some of it up steep and slippery roads. After the refreshing swimming, you’re ready to explore the next hidden gem – Mycenae!

Homer described Mycenae as a city with broad streets and a golden exterior, and it was said to have been the capital of Agamemnon, the Achaean king who sacked the city of Troy. The mythological and historical significance of Mycenae makes it a world-renowned tourist destination. It is the most ancient piece of monumental architecture in all of Europe, the Gate of Lions, that is among Mycenae’s most important sites. At the site were discovered dozens of artifacts, including bronze weapons, statuettes, and objects made of gold, which are now housed in the Archaeological Museum of Mycenae. The popular summer season is the best time to visit Mycenae, but thousands of tourists visit throughout the year. The city is frequently visited by Athens-based tourists, as well as tourists who visit the region on vacation.

In the Sporades island chain, Skyros Greece is the least touristically developed island. Those who love seclusion and relaxation can consider it a heavenly destination. The beautiful beaches of Skiros are complemented by traditional architecture and a network of hiking trails. The island of Skyros is also well-positioned for island-hopping to nearby Skopelos, Alonissos, and Evia thanks to its close proximity to the rest of the Sporades islands!

Skyros is an island filled with beautiful villages, including Chora, the island’s capital. One of the most fascinating landmarks of Skyros can be found on a hill above Chora, crowned by the Byzantine castle and the monastery of Saint George. During the evening, Chora is the perfect place for having a romantic picnic with soft drinks and a sophisticated group.

Skyros is an excellent trekking destination for those who don’t enjoy beaches, thanks to the extensive network of hiking paths. Going on a hike is your best bet if you’d like to explore the island’s natural landscape!

A beautiful Greek island, Chios is situated in the Aegean Sea. The cosmopolitan resort of Izmir in Turkey is only a ferry ride away from Chios. The ancient villages of Chios are its most famous attraction, even though it has many stunning beaches. Pyrgi and Olympi, which are traditional Chios’s villages, are notable for their elaborate architecture and fortified buildings. Chios houses are like nothing else you’ve ever seen before! A labyrinth of narrow alleyways surrounds them, providing a mysterious feel as they are embellished with black and white geometrical designs.

A driving tour around Chios will provide you with the best insight into the island’s mystery. In addition to these highlights, you can explore ghost villages, castles from the Middle Ages, and Byzantine monasteries like the Monastery of Nea Moni and the Protectorate of Agia Markella.

In conclusion, it is worth saying that Greece is incredibly diverse, beautiful, and can surprise an infinite number of times! Every corner of it is imbued with unique architecture, archaeological heritage, unique Hellenistic culture, delicious national cuisine, and a fun atmosphere of relaxation. The five destinations mentioned above are just a small part for exploring the hidden beauties of stunning Greece! The land of the first Olympic Games – Olympia, the knights’ fortresses in Thessaloniki, the Temple of Apollo in Delphi, the Palace of Knossos on the island of Crete, where the mythical Minotaur lived, are worthy of your attention! It is best to travel around Greece in a couple so that there is always someone with whom to share vivid emotions and impressions of picturesque Santorini, exquisite Mykonos, or the incomparable Meteora Monasteries in Kalambaka. Open up to new experiences and adventures in the land of gods and heroes – the majestic Hellas. Enjoy your voyage!

You Might Also Enjoy: 28 of the Best Things to Do in Athens