When is the Best Time to Visit Greece? 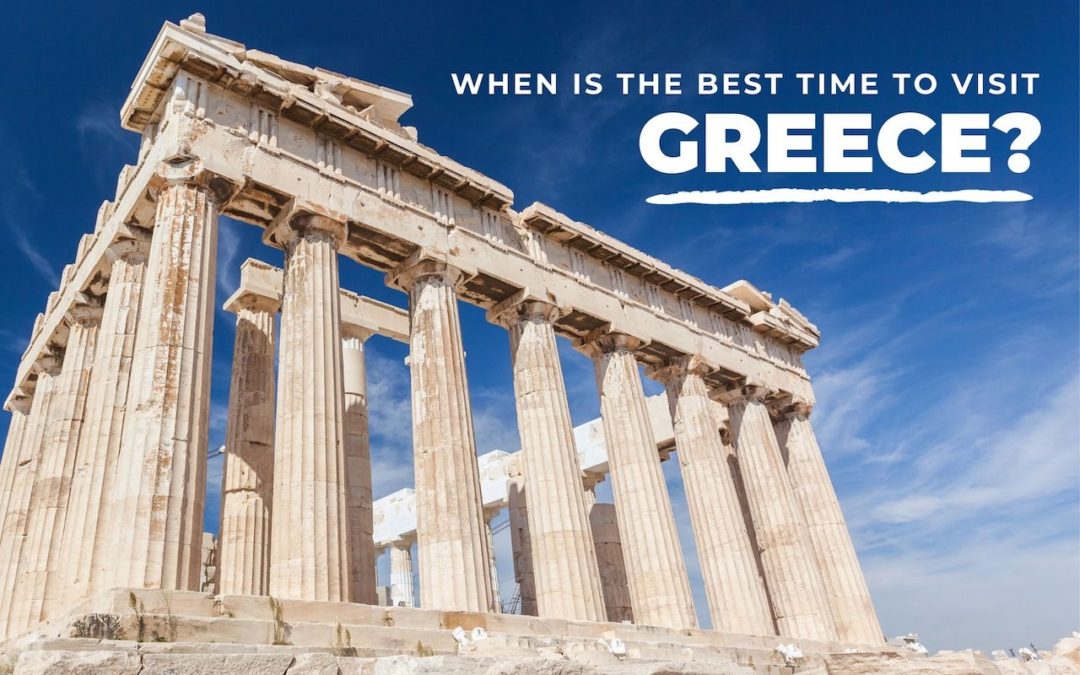 When Greeks are asked when is the best time to go to Greece, the answer is often “year-round”.

This is due to the fact that the weather in Greece is relatively pleasant for the majority of the year outside of the winter months.

While the best time to travel to Greece may be between April and October, experienced travelers often try to avoid visiting the country between the months of June and August as peak season in Greece is in full effect.

During peak season, you’ll find tourists from around the world flocking to the Greek islands to soak up the sun and take advantage of the cool, refreshing sea temperatures.

However, the number of people who visit during high season tends to send accommodation rates through the roof making June, July and August the most expensive time to visit Greece.

Adventure travelers and those who enjoy outdoor activities such as hiking, cycling and sightseeing prefer to visit some of the many natural and man-made monuments the country has to offer during the months of mid-March through the beginning of May and October through December.

During these months, the temperatures have cooled down quite significantly and most tourists have already headed back home.

If you are looking to avoid the crowds and costs that come with the summer months in Greece, then the lower, off-peak season (April through mid-May and mid-September through the first week of October would be your best bet and will be the cheapest time to go to Greece.

Weather in Greece Year Round

While the weather in Greece in January can get very cold, it is rarely ever as cold as the rest of Europe.

Best Time to Travel to Greece

Generally speaking, the best time to travel to Greece is between the months of April and late October.

During this period, the sun shines bright and the skies are free of clouds.

Weather in Greece By Month

Weather in Greece in January

It is also dark a lot, with only three hours of daylight per day.

Although this is the coldest month in Greece, it can be quite pleasant for those coming from either extremely hot or cold climates.

While January may not be the best time to visit Greece in search of sun and sandy beaches, Greece does have a couple of ski resorts that are worth checking out.

The most popular ski resort being the Parnassos Ski Centre at Mount Parnassos.

Weather in Greece in February

The weather in Greece only changes marginally between January and February, and it remains the coldest period of the year.

There is slightly more daylight as well – going up to four hours from three hours per day.

If you visit Greece in this period, prepare by packing warm clothing so you can still enjoy your time in the cooler weather.

Weather in Greece in March

The weather in Greece starts to liven up in March, with daily temperatures averaging around 12°C (53.6ºF).

In Athens, temperatures can rise as high as 17°C (62.6ºF) and there is a slight chance of rain during this period.

At this time, the holiday destinations are beginning to warm up a bit but are still not fully active.

However, if you like to travel for the sights, late March is said to be the best time to visit Greece in regards to taking tours and sightseeing.

If you’re planning to visit Athens, we recommend you try to plan your trip between the months of March and June, or from September to November.

You might also enjoy: 8 Amazing Day Trips from Athens

Weather in Greece in April

In April, the weather in Greece takes a definite turn for the better, and by the end of the month, holiday season will have officially begun.

With an average temperature of 20°C (68ºF) in places like Athens, the beaches are open and you’ll find people walking around in t-shirts and shorts during the daylight hours.

However, you’ll notice that tourists and locals dress warmer at night as the evening rains are still present in the city.

As it is about to approach the very beginning of the holiday season, both crowds and prices are still on the lower end of the scale.

April (preferably mid to late April) is one of the best times to travel to Greece if you are looking to enjoy a vacation on a budget without the crowds and endless lines.

Weather in Greece in May

In May, the weather in Greece shifts from Spring to Summer. Average temperatures are from lows of 14ºC (57.2ºF) in the cool nights (you might need a light cardigan), and 25ºC (77ºF) during the peak sunlight hours.

While the daily temperatures may be rising, the crowds are still pretty light, making May a great month to visit Greece if you want to visit the beaches and enjoy the sea in peace.

Hotels usually offer reduced rates during the majority of the month of May, making your overall accommodation costs easier to manage.

Weather in Greece in June

Once June rolls around, the weather in Greece is spectacular and as sunny as it gets.

Recommendation: Don’t forget to pack your sunscreen if you plan on traveling to Greece in June!

Mainland Greece really starts to come alive in June and by the end of the month the prices of goods and services will begin to rise in response to the increased number of visitors.

Regardless, if you are going for the beautiful beaches of Mykonos or for a romantic trip to Santorini with your loved one, June is hands down the best month to visit Greece.

Weather in Greece in July

You might be lucky enough to see rainfall once or twice, and that’s only if you’re lucky.

Drawn by the call of the long days of sunshine and beautiful sea temperatures, the beaches of Greece are typically packed with international tourists.

You’ll also find that a lot of tourists stay in during the day in order to beat the heat and come out at night.

Overall, July is one of the hottest and busiest months in Greece when it comes to tourism.

Weather in Greece in August

August is the peak month for tourists and high prices across the board.

Oh, and it’s extremely hot to say the least.

When it comes to experiencing the nightlife scene of Mykonos, Ios, Santorini, and Rhodes, August is a very popular month with tourists.

There are also a lot of festivals in August, including the International Music Festival of Aegina, the Olympus Festival at Mount Olympus, and the Chania Rock Festival, which is held on the island of Crete.

Weather in Greece in September

By September, the weather in Greece begins to cool down slightly and the heavy flow of holiday seekers begins to slow.

Barring the possible obstruction from the winds, September is one of the best times to go cycling in Greece.

The beautiful weather that September brings along with the incredible landscape of the country will certainly make for a very memorable trip to Greece.

Note: September is my favorite month to visit Greece due to the slightly cooler temperatures and the slowly but surely declining number of tourists.

Weather in Greece in October

With the hottest part of the year now in the rear view mirror, Greece is now beginning to receive cooler, fresher weather.

Agistri, Aegina, Crete, Rhodes, Santorini, Kos, Milos, Naxos, Corfu, Mykonos, and Paros are all great places to visit in October as the temperatures are between 14ºC (57.2ºF) at night and 24ºC (75.2ºF) in the afternoon.

Wandering around these destinations in shorts and a t-shirt is still quite reasonable as the beaches are still relatively warm and the water is still welcoming.

October marks the return of low season in Greece, making it a good time to visit Greece on a budget.

Weather in Greece in November

As the weather in Greece gets cooler and cooler, November marks the end of most water-based activities like sailing and swimming.

Ranging from 19ºC (66.2ºF) during the day to 10ºC (50ºF) at night, Greece is still warmer than most parts of Europe, and some travelers still consider November to be a good time to visit.

As there are much fewer tourists around than there were a few short months ago, hotels and Airbnbs are also much more affordable.

Weather in Greece in December

Ski season in Greece officially kicks off in December as the weather takes a turn.

While December isn’t as cold as January, the temperature averages around 12ºC (53.6ºF) during the daytime and gets colder at night.

Rainfall increases as well, so you may want to pack an umbrella.

While the cold weather cancels out your chances of swimming or sightseeing for long periods of time, December is a great time to visit Greece to soak up the spiritual side of Greece by visiting its famous temples and churches.

Many of these religious sites hold services and feasts to mark the Feast of St. Nikolaos and celebrate Christmas Day.

Tourists can also join the locals to usher in the new year with dancing, feasts, and fireworks.

If you are a lover of warm weather and days filled with sunshine but don’t mind battling the crowds and high prices, the best time to take a trip to the Greek Islands is between the middle of May to through the end of August.

The weather in the Greek islands is less sunny during this time but will still be enjoyable due to the fact that crowds and lines are often non-existent.

No matter what time of the year you decide to visit Greece, it is almost guaranteed that you will have a memorable experience.

From sightseeing to skiing and cycling, outdoor activities are plentiful throughout the year.