72 Hours in Morelia: The Perfect Three Day Itinerary for Morelia 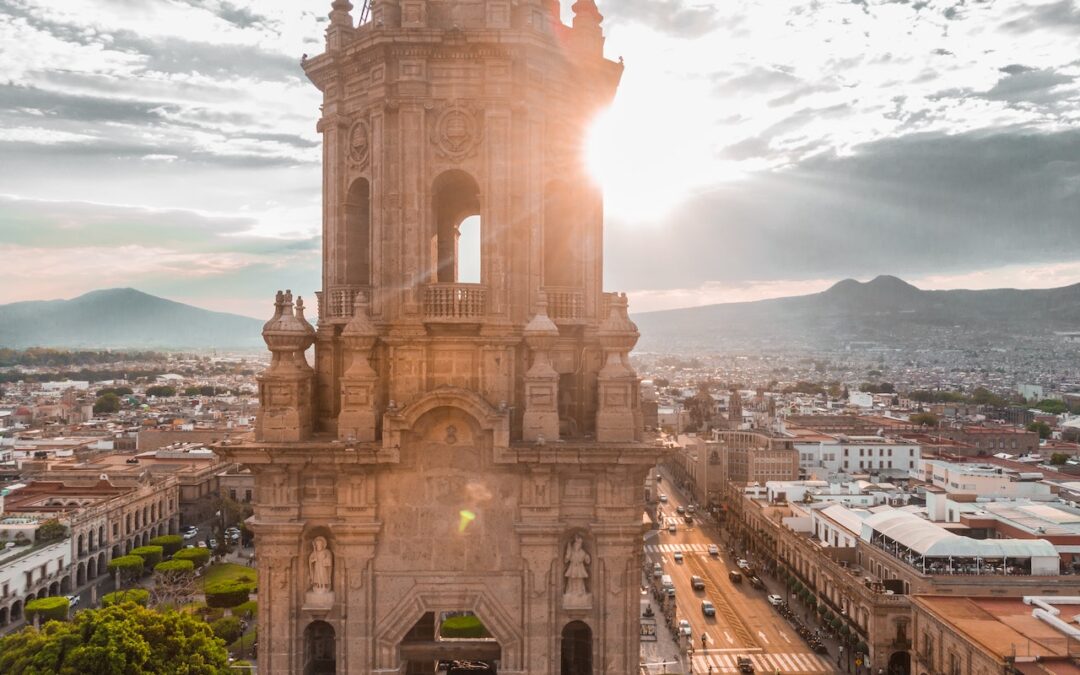 Built by the Spanish in the 16th century, Morelia is currently the capital city of the Michoacán state of Mexico.

The city is home to several well persevered buildings with rich history, including Spanish colonial palaces, and churches. The historic center of Morelia is a major attraction for visitors from all over the world.

Morelia can be easily reached by bus, car or plane from a variety of other parts of the republic of Mexico.

For those who are interested in flying to Morelia, all domestic and international flights land at Morelia’s General Francisco Mujica International Airport.

Whether you’re traveling by air or land, this travel itinerary will help you make the best of a 3 day tour in Morelia.

Among the city’s 200 historical buildings built with pink quarry stone, the majestic Morelia Cathedral’s infrastructure is incomparable to the rest.

The Cathedral covers an area of over 2 city blocks, offering fascinating architectural details which include flying buttresses.

The special Saturday night lighting of the building, along with fireworks and music, at 9:00 pm is really exciting and fun to watch.

Previously known as Valladolid, the name of the city was changed in 1828 to Morelia to honor a national hero of the War of Independence, José María Morelos y Pavón.

This historical museum was once a home to Morelos and you will find chronicles that entail the role he played in shaping Mexico. There is a statue of Morelos marking the spot where his mother gave birth to him, along with photos narrating his life.

A short walk, east of the museum, will take you to the ancient aqueduct that was built in 1785 to supply water around the city. This, 1700-meter wide and 10-meter tall, aqueduct consists of 253 arches and was under operation until 1910.

Catch a Show at the Ocampo Theater

The first show in the theater premiered in 1830, on New year’s Day. In 1861, the Theater was renamed to honor the liberal leader Melchor Ocampo. Due to its majestic set-up, the theater can cater up to 400 people.

It is open from 8 am to 5 pm, from Monday to Friday. Even if you’re not an early riser, you can plan your day 2 afternoon around a show at Ocampo.

This led to the decline of the bishop and the palace was converted into a hospital by the Johannine monks.

Visitors can explore its beautiful architecture as well as learn more about how it served the community over centuries past with interactive exhibits inside.

The Benito Juarez Zoological Park in Morelia is a great destination for those looking to explore the natural beauty of Michoacán.

The park contains various species of animals, ranging from exotic birds and reptiles to large mammals like jaguars and lions.

About 2 hours east of Morelia is the Monarch Butterfly Biosphere reserve, in the mountains of Michoacan. In late October of every year, millions of butterflies migrate from the United States and Canada to Mexican forests.

Visitors can enjoy programs that focus on conservation efforts or take part in activities such as bird-watching, monarch butterfly sanctuaries and a variety of other interesting tours.

Additionally, there are plenty of picnic spots throughout the park where visitors can relax after exploring all it has to offer!

Best Restaurants in the City

With a variety of freshly squeezed juices, delicious smoothies and an entire part of their menu dedicated to a children’s portion, Lu Cocina Michoacana is easily the best place to have a refreshing breakfast at.

From their ‘Morelia-Style Omelet’ to their American Style coffee, Lu Cocina’s menu has something for everyone.

With a 5 star rating on TripAdvisor, Macazaga Cava & Grill has a breakfast, lunch and dinner menu. However, their breakfast menu is one of the finest in the city.

With delectable pancakes topped with chocolate sauce and vanilla ice cream, fluffy omelets topped with avocado slices and a variety of coffees to choose from, this place has all your breakfast needs covered.

Escamoles, Chalupitas, Guacamole De La Casa, and Tacos De Arrachera are some of the many lunch items available at this beautiful restaurant.

The wide range of flavors it offers are supported by its charming interior, which makes dining here an experience, instead of simply a meal.

Declared a World Heritage Site by UNESCO, Los Mirasoles is one of the most stunning restaurants this city has to offer.

A visual masterpiece, this restaurant offers a diverse menu which is a fusion of both international and local cuisines. With Enchiladas Placeras, Trout Tartare, and Golden Trout tacos, Los Mirasoles easily tops the list of best dinner places in the area.

This vibrant restaurant has a variety of pastas and pizzas to choose from. To make the meal even more entertaining, there is a live band that plays in the background.

It doesn’t offer the same variety of cuisine as some of the more high end restaurants around. If you’re looking for a wholesome, hearty dinner, though, Mi Lola is the place to hit up.

You might also enjoy: 48 Hours in Mexico City: The Perfect Two Day Itinerary for Mexico City